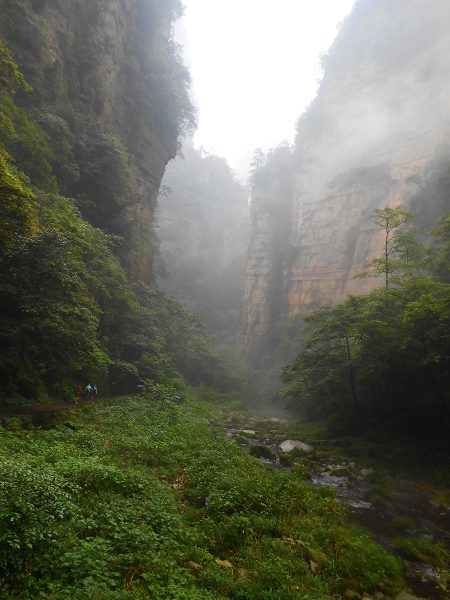 The towering sandstone pillars of the Wulingyuan Scenic Area are one of the most iconic sites in Hunan province. These stunning mountains are unique to China, and have acted as the inspiration for numerous Chinese paintings. More than 3,000 quartzite sandstone pillars and peaks, many over 200 metres (660 ft.) in height, can be found dotted throughout this colossal reserve. Alongside these lofty plinths, the area is crisscrossed with deep ravines, trickling streams, shimmering lakes, rushing waterfalls, lush rainforests, calcite caves, and two magnificent natural bridges. It is also home to a number of endangered plant and animal species, resulting in it being inscribed as a UNESCO World Heritage Site in 1992.

The scenic area itself is over 600 square kilometres (230 sq. mi) in size and is made up of four national parks: Zhangjiajie National Forest Park, Suoxi Valley Nature Reserve, Tianzi Mountain Nature Reserve, and Yangjiajie Scenic Area. The most famous of these is the Zhangjiajie National Forest Park, which is located near to the city of Zhangjiajie. Its famous pillars may look similar to the Karst Mountains of southern China, but they are actually the result of physical rather than chemical erosion. Over time, expanding ice and plants growing on the cliff-face have caused intense weathering, which has resulted in the strange rock formations we see today.

While each of these mountains has its own unique charm, the park also boasts its very own movie star! The 1,080-metre (3,540 ft.) high Southern Sky Column was official renamed the “Avatar Hallelujah Mountain” in 2010, after the blockbuster hit Avatar. According to park officials, it was photographs from Zhangjiajie that inspired the floating Hallelujah Mountains, which are a focal landscape in the film. Nowadays, this area of the park is the most heavily visited, and offers breath-taking panoramic views of the surrounding mountains. When eclipsed by fog, it may appear as though these mountains are hanging in mid-air, much like their cinematic counterparts! 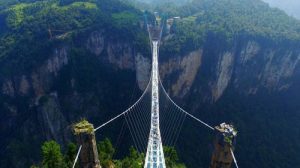 For those of you looking to truly experience the height of the national park, its two natural bridges are a must-see. They are known as Xianren Bridge or “Bridge of the Immortals” and Tianxia Diyi Bridge or “First Bridge under Heaven”. While Xianren Bridge currently has no guard rails and is closed off to tourists for safety reasons, daring adventurers can cross Tianxia Diyi Bridge and marvel at the view of the deep chasm below. Yet this is just one of the many dizzying attractions the park has to offer!

At a staggering 1,051 metres (3,450 ft.) in height, Tianzi Mountain is the highest peak in the park and can be reached by cable car. Alternatively, visitors fancying a bit of exercise can brave the 3,878-step stairway to the top! Similarly, the spectacular Bailong or “Hundred Dragons” Elevator transports weary visitors up to the top of a 330 metre-tall (1,070 ft.) cliff in less than two minutes. It is the world’s tallest lift and is composed of three glass elevators, which can each carry up to 50 people at a time. Not to be outdone, the Zhangjiajie Grand Canyon Glass Bridge hangs approximately 300 metres (984 ft.) off the ground, and is the highest pedestrian glass bridge in the world. It’s the ideal place to take a leisurely walk and truly soak in the scenery. Just don’t look down!