Since the vast majority of Dai people are concentrated in Xishuangbanna Prefecture and Dehong Prefecture of Yunnan province, they benefit from the richly fertile soil and temperate climate found in these regions. They have become accomplished farmers and are renowned throughout China for their high-quality rice, tea, bamboo, and sugar cane. In fact, during the Ming Dynasty (1368-1644), the pu’er tea grown by the Dai was considered so superb that it was worthy of being presented to the emperor! I’m sure you’ll agree that any tea good enough for an emperor is, at the very least, worth a try! Unfortunately, in recent years large portions of Dai farmland have been exclusively used to farm rubber and this has tragically proven rather destructive to the area’s natural ecosystem. 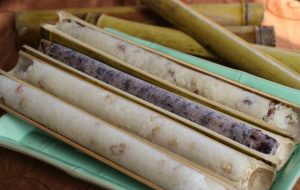 Like many groups found in Southern China, the staple food of the Dai ethnic minority is rice, with people in Dehong preferring long-grain non-sticky rice while people in Xishuangbanna preferring glutinous sticky rice. Their cuisine is characterised by its love of spicy, sour flavours and features lots of pickled meats and vegetables, while also incorporating some bitter flavours. They have a preference for fish and chicken but will also eat duck, pork and beef, avoiding only mutton. Their signature dishes are slow roasted chicken, which is as tender as it is delicious, and pickled fish wrapped in lemongrass, which has a sharp but aromatic tang. 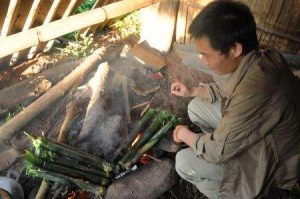 From November through to February, the Dai enjoy what is called the Bamboo Season. This is when species of fragrant bamboo, characterised by their thin stalks and long joints, become mature. The Dai call it “maihaola”, which means “rice-cooking bamboo”. They cut segments of it so that one end is open but the other still has a joint at the bottom. They then put rice into the bamboo tube, plug the opening with palm leaves and roast the tube over a charcoal fire until it emits a tantalising aroma. This bamboo cooked rice has a distinctive flavour imparted by the thin, fragrant film on the inside of the bamboo stalk. However, watching these jade green tubes as they are filled and gently roasted is a visual feast in of itself!

The diet of the Dai people may seem simple enough, but they have one quirky eating habit that has become somewhat notorious and has evolved out of living in a humid sub-tropical climate. Whether they’re grilled with spices, deep-fried, or roasted, the Dai people love eating large insects. They are particularly fond of cicadas, bamboo worms and several species of spider. So while most creepy crawlies would have many foreign tourists running for cover, the sight of them is enough to give the average Dai person a rumbling stomach! When it comes to quenching their thirst, the Dai normally wash down these squirmy snacks with partially-fermented sweet wine or large-leaf un-perfumed tea. 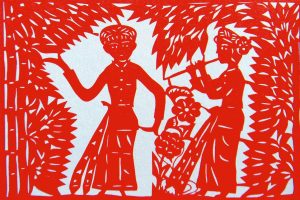 Paper-cutting is one of their traditional folk arts and is often used to design patterns on household articles such as bed linen, bags, and pieces of clothing. They employ beautiful and intricate motifs of trees, birds, insects, humans, and a myriad of other animals. Some even contain complex story-telling images that are relevant to Dai folklore. These patterns are similar to those found on “tong pa”, a type of satchel used by the Dai people for safekeeping a variety of items, from cigarettes and seeds to sewing kits and love tokens.

These satchels are also intricately carved with images of animals, trees, and flowers, but the motifs and colours used bear some significance. For example, the use of green or red signifies respect for your ancestors, the image of the peacock symbolises good luck, and the image of an elephant denotes a good harvest and a happy life. This symbolism reflects the Dai’s reverence for nature and for their desire to strive for a better life.