The violent collapse of the Western Jin Dynasty (265–316) fractured the country, creating a stringent North-South divide that would persist for centuries. While the north was separated and conquered by a series of barbarian kingdoms, the Eastern Jin Dynasty (317–420) desperately clung to power in the south. Toward the end of the Eastern Jin, the puppet ruler Emperor Gong was under the sway of a rebellious military general named Liu Yu. In 420, with the imperial court weakened and the environment ripe for military coup, Liu Yu forced Emperor Gong to abdicate and took control of southern China, establishing the first of the Southern Dynasties; the Liu Song Dynasty (420–479).

Meanwhile, it seemed as though the north wasn’t having it any easier! Northern China was embroiled in a turbulent era known as the Sixteen Kingdoms Period (303-439), during which the northern territories were divided among a plethora of different dynasties. Of these, it was the Northern Wei Dynasty (386–535) that came to the fore, having been established by the Tuoba clan of the Xianbei ethnic group in 386. After a sequence of successful military campaigns, they were able to unify northern China in 439 and became the first of the Northern Dynasties. With the country thus fissured, it seemed yet another politically unstable period of history was on the horizon. As it would happen, this stalemate between the Northern and Southern Dynasties would last for a staggering 169 years!

While the Liu Song Dynasty would eventually collapse, it would be succeeded by the Southern Qi (479–502), Liang (502–557), and Chen (557–589) dynasties. For the most part, these dynasties held their capital in the southern city of Jiankang (modern-day Nanjing). Similarly, civil unrest would prompt the Northern Wei Dynasty to splinter into the Eastern (534–550) and Western Wei (535–557), which would ultimately be overthrown by the Northern Qi (550–577) and Northern Zhou (557–581) dynasties respectively. Yet, chaotic though this period in history may have been, it was also one of great cultural development and enlightenment. 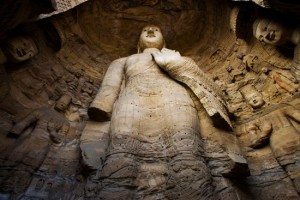 Advancements in art, culture, technology, and the spread of both Buddhism and Taoism meant that the Northern and Southern Dynasties Period was a crucial era of progress in Chinese history. It was the Northern Wei imperials who masterminded the construction of the magnificent Longmen Grottoes in Luoyang and Yungang Grottoes in Datong, while Emperor Wu of the Liang Dynasty was renowned for his generous patronage of Buddhist temples and Buddhist art. Ethnic groups who had settled in the north of China became increasingly more Sinicized, while droves of Han Chinese immigrants gradually populated the south and mingled with its indigenous peoples.

This is what set the scene for the country’s eventual re-unification. After the Northern Zhou conquered the Northern Qi Dynasty in 577, a powerful Northern Zhou official named Yang Jian began his rise to prominence. During a political coup in 581, he was able to depose the reigning Emperor Jing and thus established the Sui Dynasty (581-618). His shrewd intellect and superlative military strategies finally led to his domination of the Chen Dynasty in 589. This would be the first time that China had been firmly and sustainably unified in over 300 years! Although the Sui Dynasty would be tragically short-lived, it laid the foundation for one of the golden eras in Chinese history: the venerable Tang Dynasty (618-907).