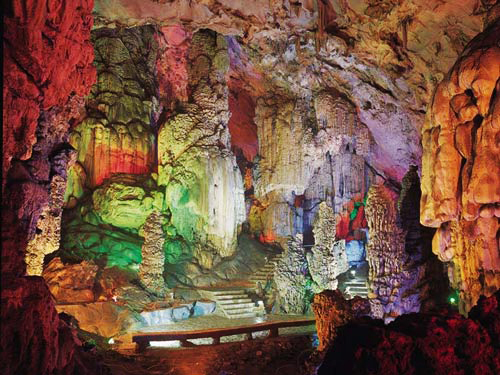 The Dragon Palace Cave Scenic Area boasts a network of underground caves and natural Karst rock formations that are unparalleled throughout China. The area is so-named because the Dragon Palace Cave, or Longgong Cave, is so magnificent that it is believed to resemble the legendary palace of the Dragon King. It is home to the longest underground river and the largest underground waterfall in China. The attraction is separated into four main parts: the Rapeseed Lake, the Whirlpool, the Leech Pass, and the Dragon Palace. It is located in the Matou Township, about 32 kilometres away from Anshun City, Guizhou.

This magnificent underground cave system covers a colossal 60 square kilometres (23 square miles) and is made up of lakes, waterfalls, stalactites and stalagmites. The underground river stretches some 5,000 metres in length and flows beneath 20 hills, connecting over 90 limestone caves. Currently only about 1,000 metres (1 km) of the river is open to tourists. Tourists can enter the cave system by rowboat via the mouth of a cave on Heavenly Lake (Tianchi Lake). From there, they can enjoy a calming boat ride along the underground river and watch the landscape change as they go deeper and deeper into the caves. 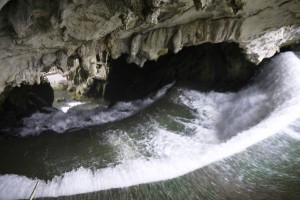 At the entrance to the Dragon Palace Cave, you’ll find the largest underground waterfall in China: the Dragon Gate Fall. The waterfall crashes down directly from Heavenly Lake through a crescent-shaped hole and falls into a pool inside the Dragon Palace Cave. It is 38 metres high and 25 metres wide, forming a solid column of rushing water, and from the bottom it looks like a beautiful white dragon flying out of the cave. On entering the Dragon Palace Cave, you’ll be met with a stunning display of coloured lights that are used to illuminate it. The cave is full of huge stalactites and stalagmites, all curving up from below the water or down from the ceiling. They look strangely beautiful when lit up and add to the supernatural atmosphere of the cave.

The region surrounding this tourist site is home to the Bouyei ethnic minority, so a trip to Dragon Palace Cave provides anyone with the perfect opportunity to visit a few Bouyei villages and communities along the way. This region is also well-known for its towering mountains, crystal clear lakes and stunning rape flower blossoms. Due to the unusual shape of the Karst landscape, when the rape flowers blossom they create beautiful waves of yellow and gold across the mountains and plains. If you visit the Dragon Palace Cave in spring, you may even get to see some of the local Bouyei performances for the Rape Blossom Festival, which is celebrated between February and March every year. With its thundering waterfalls, glistening stalactites, and shadowy caves, the Dragon Palace Cave Scenic Area is truly a sight worth seeing, both inside and out. 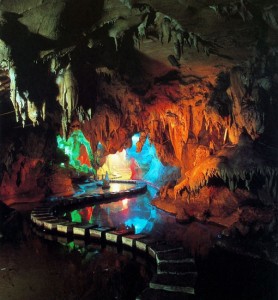 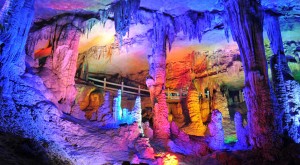