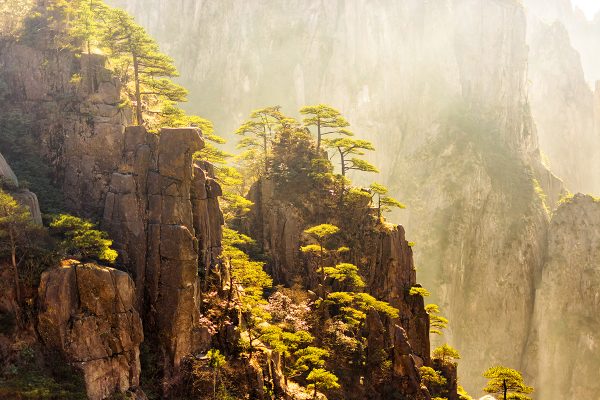 Mount Huang is located in the southern part of Anhui Province. It is undoubtedly the most popular mountain among tourists in China because of its grandeur and beautiful scenery. It was called “Yi Mountain” in the past. In ancient times people believed that Huang Di (a King in Chinese legend) had come here to make pills of immortality. So it was given the name “Mount Huang” in AD 747.

Mount Huang towers majestically over the hilly regions of southern Anhui and takes up an area of 1,200 square kilometres (40 kilometres from north to south and 30 kilometres from east to west), however, 154 kilometres makes up the area of most significance on the mountain. It incorporates almost all of the finest features found in the famous mountains of China: the majesty of Mount Tai, the precipitous shape of Mount Hua, the cloud and mist of Mount Heng, the flying waterfalls of Mount Lu, the fantastic rocks of Mount Yandang and the quietness and coolness of Mount Ermei. Its fascinating appearance has drawn many distinguished travellers, including poets, writers, and painters, to travel to Anhui and contemplate its majesty. Xu Xiake, a well-known geographer from the Ming Dynasty (1368-1644), extolled the beauty of Mt. Huangshan using the following words: “It is not worth seeing other mountains if you have been to the Five Great Mountains; and it is not worth seeing the Five Great Mountains (Mount Hua 华山, Mount Heng 衡山, Mount Tai 泰山, Mount Heng 恒山 and Mount Song 嵩山) if you have been to Mount Huang.” “After climbing Mount Huangs, a trip to any other mountain would not be worthwhile.” 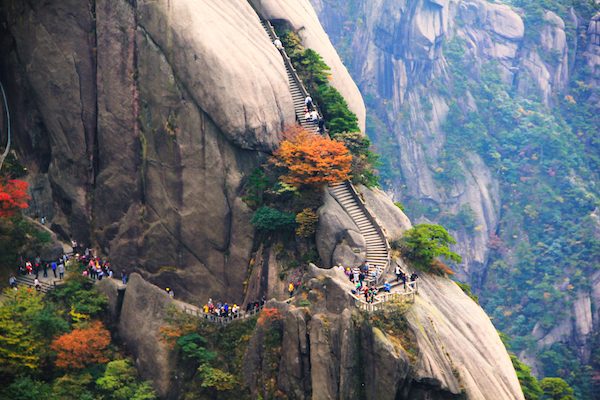 The mountain has 72 famous peaks. The shape of each is thought to resemble a human or animal figure, such as “A Celestial Being”, “A Monkey Watching the Sea” and “A Golden Cock Crowing at the Gate of Heaven”. The three major peaks of Mount Huang are the Lotus Peak, the Heavenly Capital Peak and the Bright Summit. They are all over 1,800 metres above sea level. The Lotus peak is the highest one, the Heavenly Capital peak is the steepest, and the Bright Summit is the flattest. The highest peak, the Lotus Peak (1,864.8 metres), towers over the central part of Mount Huang. The mountain is a body of granite, often with vertical joints. When it is cloudy, the peaks loom in the mist as if they were an illusion. When the sun shines, they appear in all their majesty and splendour.

Mount Huang is consistently both beautiful and peculiar all year round. The queer pines, the misshapen rocks, the sea of clouds and the hot springs are reputed to be the four major natural wonders without equal.

Mount Huang is one of the many wonderful stops on our tour: Explore Chinese Culture through the Ages