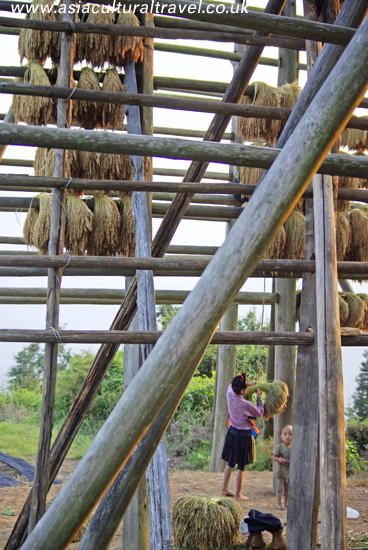 Dong people are well-known for cultivating dozens of varieties of glutinous rice, which are called “Kam rice” or “good rice”. They also typically grow maize, millet and mushrooms, and a variety of fruit, such as plums, peaches, pears, and watermelons, to supplement their diet. Dong people raise pigs, chickens, ducks, geese and fish for food, water buffalo for ploughing and for food, and dogs for protection and companionship. The “four pillars” of Dong cuisine are glutinous rice, pickled vegetables, red chillies and rice wine. Other popular local food includes barbecued fish, oil tea, and glutinous rice snacks. The Dong people also occasionally eat giant salamander, which is considered a rare local specialty. They will normally have two hot meals (breakfast and dinner) and one cold meal (lunch) every day. 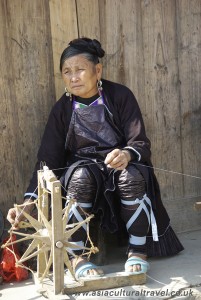 Cotton is locally grown and weaved into cloth that is used to make clothes. Silks and finer cloths are exclusively used to make festival clothing. Dong men will normally wear short jackets with buttons down the middle, although in the south they wear collarless shirts and turbans. Dong women wear skirts or trousers that have beautifully embroidered hems. They wear their hair in a coil and wrap their legs and heads in decorative scarves.

Most regions where Dong villages are found are also famous for their fir trees. Dong people use the wood from these trees to build their houses and other structures in the village. They are skilful carpenters, and are also accomplished at silverwork and wickerwork. Wickerwork is usually done by the men, who use materials such as glutinous rice straw and bamboo to make baskets and other wicker furnishings.

With more than 1,000 years of history, beginning in the Tang Dynasty (618-907), Xuancheng has always been the best place for the production of Xuan Paper. The name “Xuan”, as you can see, comes from the name Xuancheng.

The raw materials used in the production of Xuan Paper are the bark from green sandalwood, which is found in the mountainous regions of Huizhou, and the straw made from rice grown on sandy land. Following 18 different procedures, including rubbing, steaming, starching, soaking in water, pasting, drying and so on, the white, soft and durable paper is finished and ready for sale. 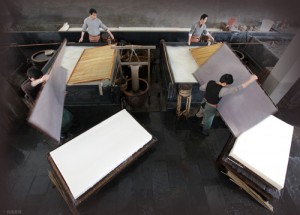 Xuan Paper is mothproof and mould-proof, resistant to ageing, very tensile and invariably white in colour. So it is often referred to as “the king of paper” and “the millennial longevity paper”.

Get some Xuan Paper on our travel: Explore the Ancient Chinese Villages in the Huizhou Region

It is called the “Dragon Tail Ink Slab” because the best material for making the slab comes from Dragon Tail Mountain in Hizhou ( Hizhou is in Jiangxi Province now).

The She Ink Slab is green and sparkling in colour, it has a fine grain and it is very hard. It blends the ink with water well. The She Ink Slab is very precious for three reasons: 1. It is made of rare and beautiful stones which are only found on the bottom of streams in remote mountains. 2. It is a laborious job to try and carve this kind of hard stone.

Get some She Ink Slab on our travel: Explore the Ancient Chinese Villages in the Huizhou Region

The Huizhou Ink Stick is famed for being lustrous, black, moist, strongly fragrant, mothproof and mould-proof. The ink will be spread too much on the paper nor stick to the brush. So it is perfect for both painting and calligraphy. 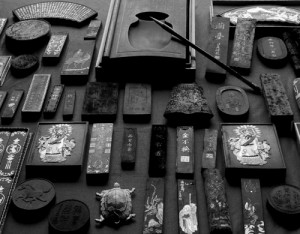 Shexian, Tunxi and Jixi in the Mt. Huangshan region are the main areas of production for the Huizhou ink stick and they have been producing the Huizhou Ink Stick for more than a thousand years. Xi Chao and his son Xi Yangui founded the manufacture of the ink stick during the Southern Tang dynasty (937-975).

The Huizhou Ink Stick uses pine wood as its main raw ingredient, which is then mixed with another 20 different materials. The manufacturing procedure includes lighting the smoke, blending the materials together, pressing the ink stick, drying by airing, filling the margin and boxing. The “Super Lacquer Smoke Ink Stick” is the best quality ink stick amongst the already superior Hui ink sticks. 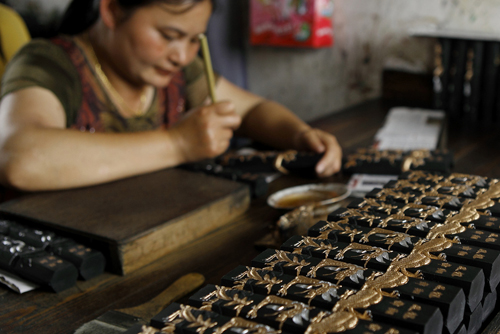 Get some Huizhou Ink Stick on our travel: Explore the Ancient Chinese Villages in the Huizhou Region