Inner Mongolia, officially known as the Inner Mongolia Autonomous Region, is the third largest subdivision in China and accounts for over 12% of its land area but, with a population of just 24 million people, it makes up less than 2% of the country’s overall population. If you’ve ever experienced one of the bitterly cold winters in this region, then you’ll understand why it’s so underpopulated!

It hosts substantial constituencies of the Mongol, Daur, Oroqen, Ewenki, and Manchu ethnic groups and has two official languages; Chinese and Mongolian. This means all street signs, shop signs, and documents are written in both Chinese and traditional Mongolian script. So, if you can’t read Chinese, you just need to learn how to read vertical Mongolian characters; simple!

The region is located in the north of China and shares most of its border with Mongolia, although a small part is shared with Russia. Historically, it has been a place of both conflict and co-habitation between Chinese agriculturalists and various ancient nomadic groups, including the Xiongnu, Xianbei, Khiten, Jurchen, and Mongol people. This has resulted in a fascinating mixture between these diverse cultures, which can be found in the region today.

Due to its bizarrely elongated shape, the climate varies wildly from region to region but is, generally speaking, subject to blisteringly cold winters. Spring arrives in April and is a short three-month affair, while summer similarly arrives in July and leaves but two months later. This gives way to winter around about mid-September, where icy winds and blizzards dominate the landscape. Temperatures drop rapidly to below 0 °C (32 °F) and this can continue all the way through till March. So if you’re planning on spending Christmas in Inner Mongolia, we recommend packing about ten jumpers, four pairs of gloves, three pairs of thermal trousers, earmuffs, and a hat! 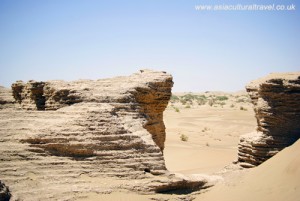 The region’s unusual shape means that the landscape varies greatly, from lush grasslands, dense forests, and misty mountains in the east to scorching hot deserts in the west. On the grasslands and wide spaces between cities, the traditional nomadic lifestyle of the Mongolian people is evidenced by yurts or Mongolian tents. Large portions of grassland are still used for grazing domestic animals such as sheep, goats, cattle, Bactrian camels, and the famous Mongolian horses.

Horse-riding, wrestling, camel-riding, rodeo and archery competitions are just a few of the ways in which these Mongolian families enjoy themselves. The best time to visit is during their Nadam Festival, when performances and competitions of all kind take place throughout July and August. Just don’t try to rodeo a camel!In terms of religion, it’s estimated that over 80% of the population continue to follow Chinese folk religion and Mongolian shamanism. In particular, the cult of Genghis Khan is still hugely popular and is evidenced by various temples dedicated to him, as he is not only considered a cultural hero but also a divine ancestor figure and the embodiment of the God of Heaven or “Tenger”. The venerated Mausoleum of Genghis Khan, located just outside of Ordos City, is an empty tomb built in his honour. 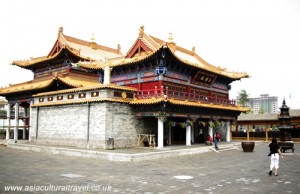 With such a plethora of cultures, climates, and landscapes on offer, Inner Mongolia has some of the most tragically underrated tourist attractions in China. In the provincial capital of Hohhot, the Dazhao Temple is a local favourite and is known for three sites: its Buddha statue made entirely of silver, its elaborate carvings of dragons, and its magnificent murals.

Another beloved site is that of Zhaojun Tomb just 10 kilometres (6 mi) from Hohhot. It is the final resting place of Wang Zhaojun, a Han Dynasty (206 BC–220 AD) aristocrat who became the consort of a Xiongnu ruler named Huhanye Shanyu. It is sometimes referred to as “Qing Zhong” or “Green Tomb” because, according to local legend, while all the grass turns yellow in winter, the grass surrounding the tomb always remains green.

Yet by far the most outstanding attraction of Inner Mongolia is its expansive grasslands and meadows, which provide visitors with a taste of idyllic, rural life. For the more adventurous traveller, the deserts in the western part of the region, such as Badain Jarain and Tengger Desert, can be visited during early autumn when the weather is still temperate.