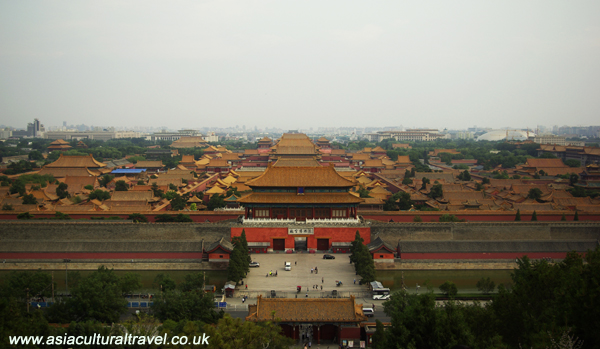 Chinese people prefer to call it the Purple Forbidden City. This is because in Chinese legend the King of Heaven, the Jade Emperor (the Supreme Deity of Taoism), supposedly lived in a Purple palace. Each emperor believed that they were the “son of heaven” (i.e. the son of the King of Heaven) so therefore they felt that they should have the same kind of palace as their father.  The Forbidden City was the imperial palace during the Ming (1368-1644) and Qing (1644-1911) dynasties. Construction of the Forbidden City began during the early 15th century and was masterminded by Emperor Yongle. 100,000 artisans and one million labourers were involved in the construction of this huge monument. It took 14 years to build and was finished in 1420. 24 successive emperors from both the Ming and Qing dynasties lived there over a period of 491 years.

From the picture, you can see that there are many red walls and yellow glazed-tile roofs all over the Forbidden City. In China, the colour red has long been a symbol of honour, wealth, happiness and solemnity. For example, a bride and her bridegroom will wear red for their wedding ceremony; when a baby is born, its family dye eggs red and send them to relatives and neighbours; during the Chinese New Year, gifts of cash are placed in small red envelopes to give to children; and, in modern Chinese history, Chairman Mao established the Red Regime. Yellow was used extensively by emperors alone. Their special clothes, called Dragon Pao, were yellow and were so-named because emperors were regarded as the sons of heaven and were thus destined to rule the world.

There is only one building in the Forbidden City with a black roof – Wenyuange. Wenyuange is the royal library. According to the Chinese theory of the “five elements”, the colour black symbolises water so, symbolically speaking, Chinese people believe that a black roof should protect the library from fire.

It was believed that the Jade Emperor had 10,000 rooms in his Purple Palace. As his sons, the mortal emperors could not have more rooms in their palace than their immortal father. What is more, in China the number 9 symbolises a long life and thus a long reign for the emperor.

The “half room” was constructed on the ground floor of Wenyuange. It is just a staircase, and was built purely for aesthetic purposes.

Note: there are now only 8707 rooms remaining in the Forbidden City.

The gate is made up of five openings. The emperor was the only one who had the right to use the central passage. The queen was given one opportunity to use this central passage, and that was on her wedding day. High-ranking officials went in through the east side-passage and the royal family members used the west side one. 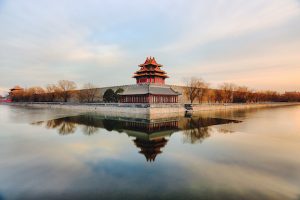 During the Ming Dynasty, it was commonplace for emperors to punish high officials. The offending officials were usually taken outside of the gate and beaten with sticks. During the Qing Dynasty, the officials would wait on the inside of the Meridian Gate every morning to report and discuss state affairs with the emperor inside the palace. On these occasions, the drums and bells announced the emperor’s arrival.

The Gate of Supreme Harmony

During the Ming and early Qing Dynasties, a throne was placed near the Gate of Supreme Harmony for the emperor to sit on whilst he listened to reports from high officials which required his judgement. In the Qing Dynasty, during the Emperor Kangxi’s reign (1662-1722), this throne was moved to the Gate of Heavenly Purity.

Other important gates in the Forbidden City include:

Taihe Hall is known as the “Hall of the Golden Throne”. During the Ming and Qing dynasties, it was used for ceremonies that marked national events of the utmost importance, such as the enthronement of an emperor.

It is the largest surviving wooden palace in China. 72 wooden pillars support the entire building. Four of them are in the centre, with large dragons carved into each one in such a way that they appear to be curling around each pillar. These dragons symbolise imperial authority. The length to width ratio of the building is 9 to 5, which signifies imperial dignity. The hall’s double-layer arched roof slopes down slightly towards the four eaves. There are nine animals and one phoenix on each of these four ridges. It was believed that they would protect the building from evil spirits.

Other important halls in the Forbidden City include:

The Hall of Military Prowess

The Hall of Mental Cultivation

The Hall of Union and Peace

The Hall of Imperial Zenith

The Palace of Heavenly Purity was commonly used by emperors as a place to rest and relax. The Qing emperors Shunzhi and Kangxi lived there and also handled state affairs from this palace. But the third emperor of the Qing Dynasty, Emperor Yongzheng, moved his base of operations to the Hall of Mental Cultivation.

Other important palaces in the Forbidden City include:

The Palace of Earthly Tranquillity

Other important places in the Forbidden City include:

The Office of the Privy Council

Explore the Forbidden City on the tour: Explore Chinese Culture through the Ages