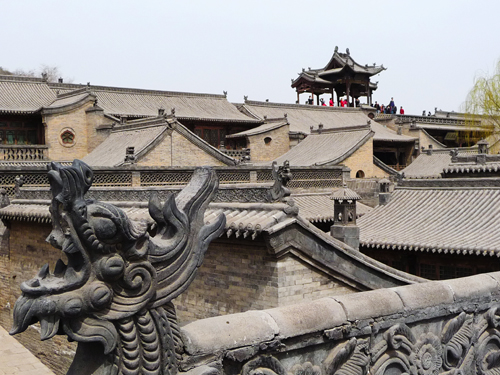 Shanxi Grand Compounds were magnificent courtyard houses that were originally built during the Ming (1368-1644) and Qing (1644-1912) dynasties by prosperous families hailing from Shanxi province. Many of them are scattered throughout Qi County, including the Qiao Family Compound, the Wang Family Compound, the Cao Family Compound, and the Qu Family Compound. These families largely skyrocketed to untold wealth by becoming merchants or bankers, which enabled later generations to take the imperial examinations and become powerful government officials. In short, the golden apple never falls too far from the money tree!

These compounds are so impressive in their grandeur that they are more like castles than mansions, with an architectural style that imitates the traditional “siheyuan” or “quadrangle” of northern China. The Chinese quadrangle is typically formed in the shape of a rectangle, with all of its rooms facing inwards towards a large courtyard. Shanxi Grand Compounds are like a composite of several small Chinese quadrangles, which are ultimately surrounded by high walls for defensive purposes. After all, such a large display of wealth is bound to attract unwanted attention! The layout of these compounds is usually symbolic and expresses the hopes of the resident family. For example, the Qiao Family Compound was designed in the shape of the Chinese character “囍”, which means “happiness” and conveys the family’s desire for a bright future.

If you are interested in the history of the Shanxi merchants who built these compounds, please read the article entitled Jin Merchants.

Thanks to its starring role in Zhang Yimou’s moving drama Raise the Red Lantern, the Qiao Family Compound is the most famous of its kind and has thus been beautifully preserved. Located within the village of Qiaojiabao approximately 30 kilometres (19 mi) from the historic city of Pingyao, the compound was originally known as Zai Zhong Tang (在中堂) and was constructed in 1756 by a renowned merchant named Qiao Guifa, who made his fortune selling tea and tofu.

In the ensuing 160 years following its completion, it was restructured and extended three separate times by Guifa’s successors. The finished estate, which covers a colossal 8,724 square metres (93,904 sq. ft.), is comprised of 6 large courtyards, 20 smaller courtyards, one ancestral temple, and a staggering 313 rooms. Its imposing 10-metre (33 ft.) high walls endow the compound with a fortress-like appearance from the outside.

While the history of this majestic mansion began with the venerable Qiao Guifa, by far the most renowned and successful businessman of the Qiao family was Qiao Zhiyong. During the period when he was head of the family, the Qiao clan controlled over 200 shops located throughout the country, including a number of prototype banks, pawnshops, teahouses, and granaries. It was Qiao Zhiyong who embarked on the compound’s largest expansion, resulting in the grand mansion that we see today. Yet it wasn’t just Qiao Zhiyong’s business acumen that enabled the compound to succeed. 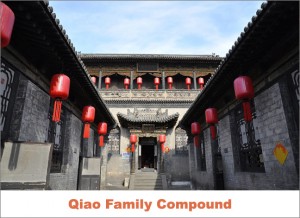 In 1900, the Eight-Nation Alliance sent troops to liberate their embassy in Beijing, which had been under siege as part of the violent Boxer Rebellion. Once they had resolved the issue with the embassy, they decided to invade and occupy the city of Beijing. In response, the governor-general of Shanxi province ordered that all foreigners in the region were to be killed on site. Seven Italian sisters, who were working in the country as missionaries, managed to escape the ensuing panic and eventually arrived at the Qiao Family Compound. They begged Qiao Zhiyong for protection and he accepted their plea.

To honour his benevolence, the Italian embassy awarded him with an Italian flag. Many years later, during the Second Sino-Japanese War (1937-1945), the Japanese army chose not to destroy the Qiao Family Compound thanks to the presence of this flag, as Italy was one of their political allies at the time. The compound was occupied by the Qiao family right up until 1985, when it was converted into a museum.

Wandering through the compound’s many rooms and corridors is a banquet of delights, resplendent with some of the finest wood carvings, brick carvings, stone carvings, murals, and wall sculptures in northern China. Nowadays it houses over 2,000 cultural relics, including porcelain, silk embroidery, paintings, and divine furnishings that are sure to transport you back to the luxurious lifestyle of the Qiao family. Just don’t stay too long, or you may never want to leave!

While it may not be as popular as the Qiao Family Compound, the Wang Family Compound is actually four times its size and rivals the Forbidden City in its magnitude! With six castle-like courtyards, six lanes, and one street incorporated into its vast complex, it stretches over an area of 150,000 square metres (161,4587 sq. ft.). Its five main courtyards were designed to symbolically represent the five lucky animals according to traditional Chinese culture: the Dragon, the Phoenix, the Tortoise, the Qilin (Chinese Unicorn), and the Tiger. In short, you could say the Wang family were living in the belly of the beast!

Like many of the Jin merchant families from this region, the Wang family began as simple farmers and eventually graduated to becoming small time businessmen. During the Ming Dynasty, they expanded their business gradually and hoped that, ultimately, their efforts would grant their successors the opportunity to gain official positions in the government. By the Qing Dynasty, the family had reached the peak of their prosperity and over 100 members of the Wang family were high-ranking officials. Talk about achieving your long term goals! Unfortunately all this good work would be undone towards the end of the dynasty, as future generations of the Wang family lacked their forebears’ ambition. After having lived in this grand mansion for 27 generations, the last members of the Wang family left in 1996 and it was opened to the public in 1997. 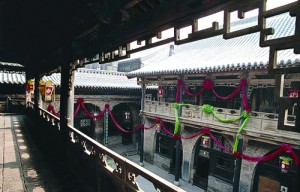 Nowadays, only two of the colossal courtyards and one of the ancestral halls are open to tourists, comprising a total of 123 smaller courtyards and over 1,100 rooms. The complex has been separated into three main areas: the Red Gate Castle; the Gao Jia Ya; and the Chongning Bao. Much like the Qiao Family Compound, these majestic halls have been transformed into exhibitions featuring artwork, calligraphy, sculptures, and other items that once belonged to the family. On August 18th of every year, a Tourism Festival is held in the Wang Family Compound, where visitors have the opportunity to watch and take part in traditional folk activities. It’s the ideal time to embrace the ancient culture in which this grand work of architecture was conceived.

Find more stories about Shanxi Grand Compounds and Jin Merchants on our tour: Explore Chinese Culture through the Ages