Different Miao communities celebrate different festivals and, in some cases, celebrate the same festival but at different times. However, the Miao New Year, the Sister’s Meal Festival and the Lusheng Festival are considered the most culturally significant and are celebrated by almost all Miao communities.

The Miao people celebrate a different New Year’s Day to that traditionally adhered to in China. It falls sometime during September to October according to the their lunar calendar. However, there is no exact date for the New Year’s Day each year and the official date is only announced two months prior to the festivities. In southeast Guizhou, the Miao community celebrate their New Year Festival on the “Rabbit Day” or the “Ox Day” of the lunar calendar according to ancient Miao tradition. During the New Year festival, women will wear traditional clothes and there will be large parades. The locals will celebrate by beating drums, dancing to the music of the lusheng, horse racing and sometimes horse fighting or bull-fighting. 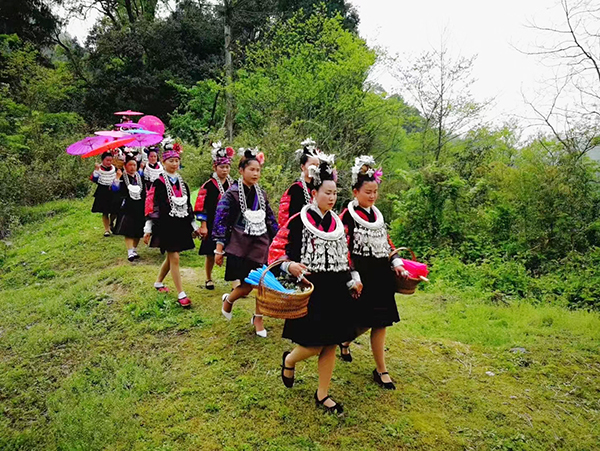 The Sister’s Meal Festival is considered to be the oldest version of what we know as Valentine’s Day. It is a favourite festival among the Miao communities in the Guizhou counties of Taijiang and Jianhe. It is celebrated from the 16th to the 18th of March according to the Chinese lunar calendar. Before the festival, Miao girls will go to the mountains to gather wild flowers and leaves, which are used to make coloured dye. This dye is used to make glutinous rice known as “sister’s rice”. When the festival begins, the Miao girls will adorn themselves in their finest silver jewellery and meet by the banks of a river to make “sister’s rice”. They dye the rice blue, pink, yellow and white to represent spring, summer, autumn and winter respectively.

Finally the men will arrive. They will each single out the woman they love and sing to them. The woman responds to these songs by giving the man a cup of rice wine and the sister’s rice, which is wrapped in a handkerchief covered in symbols. If the rice is offered with a pair of red chopsticks, it means the woman returns the man’s affection. If only one chopstick is offered, it is a polite refusal. If a piece of garlic or a red chilli is placed on the rice, this indicates a flat refusal. Pine needles scattered on the rice means the man should present silks and colourful cloths to the girl and she will wait for him to woo her. This festival is particularly important in terms of courtship, as it is one of the few occasions when men and women from other Miao villages are able to mingle freely.

The Lusheng Festival is considered the most significant of all the Miao festivals and is celebrated widely throughout Guizhou, Yunnan and Sichuan. It is celebrated from the 16th to the 20th day of January according to the Chinese lunar calendar. During the Lusheng Festival, Miao people from surrounding villages will all come together in traditional dress and the men will all bring their lusheng. The men will play the lusheng whilst the women dance. They believe that this ceremony will bring a good harvest and good health to the people in the coming year. However, the festival is not simply about playing the lusheng and also features other activities typical of the Miao, such as singing, bullfighting, and horse racing.

Although you can catch the Lusheng Festival in many Miao villages, the grandest one is considered to be the one held near Kaili in Guizhou. If you visit Guizhou in March, we recommend you visit Zhouxi Town, which is about 16 kilometres from Kaili city, where they hold a magnificent Lusheng Festival. If you miss it then there’s no need to worry! In Huangping County, about 75 kilometres outside of Kaili City, there’s another Lusheng Festival in November.

The Miao ethnic minority celebrate a wide variety of different harvest festivals based on their location and sub-group. By far the most common is known as the Eat New Festival, where communities gather to dance, sing, and pray for a bountiful harvest in the coming year. One of the main activities of this festival is to dance in large circles to the sound of raucous folk music, with a particular emphasis on a folk wind instrument known as a lusheng. In fact, the lusheng is so beloved by the Miao people that they even have an entire festival dedicated to it!

In Yunnan, the Miao people also celebrate a festival called “Stepping over Flower Mountains”. Childless couples often repeat their vows to the fertility god at this time of year. As part of a religious gesture, they will offer wine to the young people in their village. The young people will then dance under a pine tree which has a bottle of wine hanging from it. It is said that many young men and women fall in love during the festivities and childless couples hope that this will help bring them children.

Other commonly celebrated Miao festivals include the Dragon Boat Festival (national holiday), the Flower Mountain Festival (May 5th), the Tasting New Rice Festival (between June and July), the Pure Brightness Festival, and the Beginning of Autumn Festival.