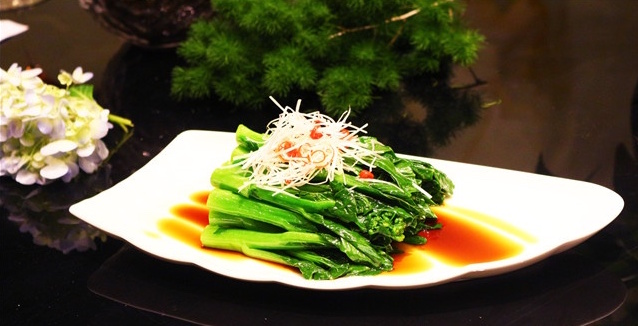 Out of the Eight Great Culinary Traditions of Chinese Cooking, Cantonese cuisine is undoubtedly the most internationally renowned. When droves of expatriates left Guangdong province in search of work across the globe, they took their love of their local food with them, and this eventually led to Cantonese food becoming the most widely spread style of Chinese cuisine in the world. So, when you next go to your local Chinese takeaway, chances are you’ll be ordering a variation of a Cantonese classic!

While Cantonese food in the West has largely been adapted to suit foreign palates, signature dishes in Guangdong province and Hong Kong have retained their traditional flavours. This style of cuisine is characterised by its use of the freshest ingredients, minimal seasoning, and quick cooking, predominantly by steaming or stir-frying. No Cantonese dish would be complete without soy sauce, spring onions, and ginger, which make up the bulk of the seasoning. Sweet sauces like oyster sauce and hoisin sauce are also popular, while other spices may be used, but always sparingly.

Since Guangdong province and Hong Kong are both coastal regions, the locals have a marked preference for seafood. Delicately steamed fish with finely sliced ginger and stir-fried shrimp with a dash of salt and pepper form just some of the dishes that exemplify the Cantonese dedication to freshness and natural flavour. Many Cantonese restaurants even go so far as to keep aquariums of live fish on the premises, ready for consumption at a moment’s notice. Yet the style has also become notorious for its use of strange and controversial ingredients, including shark’s fin, snake, rat, and abalone. So be sure to double-check your order before it arrives! 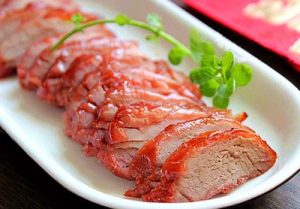 Char Siu or Barbecued Pork is a popular example of a Cantonese cooking style known as siu mei (烧味). This is where meats are roasted on spits over an open fire or in a wood-burning rotisserie oven to create a unique and intense barbecue flavour. Before being roasted, the meat is typically coated in a thick sauce, with different sauces being employed for different types and cuts of meat. As you can imagine, most family homes don’t come equipped with their own rotisserie oven, so siu mei is typically prepared at specialty shops! At these shops, patrons can purchase sliced meat on its own, or special meal boxes complete with tender roasted meat and fluffy white rice.

Char Siu literally translates to mean “fork roast”, and refers to the way in which strips of boneless pork are skewered with long forks before being roasted over a fire. In ancient times, wild boar was the meat of choice, although nowadays the cut of meat used is usually pork loin, pork belly, pork shoulder, pork fat, or pork neck-end. These cuts are chosen for their sumptuous fatty marbling, which ensures the roasted meat stays mouth-wateringly moist. The meat is seasoned with an aromatic mixture of honey, Chinese five-spice, red fermented bean curd, dark soy sauce, hoisin sauce, and rice wine, giving it a noticeably dark red complexion. Like most siu mei meats, Char Siu is often consumed with rice, noodles, or inside a bun as a form of dim sum. 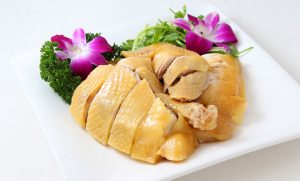 Although White Cut Chicken is usually classed as another type of siu mei, it can be somewhat misleading since the dish isn’t actually roasted. Instead, a whole chicken is first marinated with salt before being cooked in hot water or chicken broth seasoned with ginger. Other variations involve seasoning the broth with a myriad of ingredients, including spring onions and star anise. When the water starts to boil, the heat is turned off and the chicken is left to cook in the residual warmth for about 30 minutes. This ensures that the meat is deliciously moist, without being too rubbery or overcooked. Once cooked, the chicken’s skin will still be very light in colour, but the meat will be tender and packed full of flavour.

The chicken is usually allowed to cool before being chopped into pieces and served with the bone in. It is sometimes garnished with a mixture of coriander and ginger, but is typically accompanied by a dipping sauce made from finely chopped ginger, spring onions, salt, and the leftover chicken broth. Some restaurants may also offer hoisin sauce, soy sauce, oyster sauce, or chilli oil sauce as a fun twist on the traditional recipe. The tantalisingly fresh chicken is perfectly complemented by the subtle sauce, creating a dish that is simple and naturally flavourful. 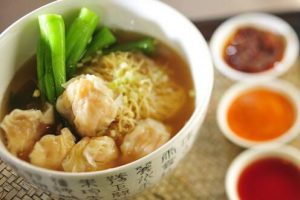 We’re sure you’re familiar with the venerable Wonton Noodle Soup, a family favourite that graces the insides of so many Chinese takeaway menus. Just like chicken noodle soup, a steaming bowl of this Chinese classic is sure to warm you up on a cold day. Yet you might be surprised to hear that this homely dish is often used to test the ability of many Cantonese chefs in training! The best wontons should always be bite-sized, and this requires a high level of skill. Too much filling and the wonton wrapper won’t close properly; too little, and the diner is left with a flavourless ball of pastry.

The wontons themselves are stuffed with a mixture of minced prawn, chicken, or pork, chopped spring onions, and mushrooms or black fungus. They are normally served in a broth, along with noodles and a garnish of leafy vegetables, such as Chinese kale. The perfect dish of Wonton Noodles should have four distinct features: the wontons should mainly contain prawn, with small amounts of minced pork or no pork at all; the noodles should taste fresh and smooth, with a slight al dente texture; the broth should be served piping hot and must be flavourful but not overwhelming; and the leafy vegetables used as garnish must imbue the dish with a pleasant aroma.

The most experienced Cantonese chefs follow a strict cooking process in order to achieve noodle perfection. The wontons are cooked first, and then placed in a bowl. The noodles are then blanched for just 10 seconds before being rinsed in cold water and placed alongside the wontons. Finally, the hot broth is scooped into the bowl on top of the wontons and noodles.

When served, the spoon must be placed at the bottom, with the wontons above the spoon and the noodles at the very top. This ensures that the noodles don’t soak up the broth for too long and thus become overcooked. After all, there’s nothing worse than soggy noodles! If you’d rather not risk it, there’s a version of this dish known as Lo Mein, which is served dry. The wontons are simply served on a large bed of noodles, with either a separate bowl of broth or a light sauce for dipping. 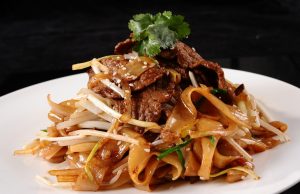 When it comes to Cantonese cuisine, with great noodles come great responsibility! Beef Chow Fun is a staple dish made from tender strips of stir-fried beef, crunchy bean sprouts, and a special type of noodle known as hor fun in Cantonese or Shahe fen in Mandarin Chinese. The star ingredient of the dish is the noodles, which are so-named because they are said to have originated from the district of Shahe in Guangzhou.

Hor fun is a type of rice noodle that is white in colour, chewy and elastic in texture, distinctly wide, and somewhat slippery. Since the noodles are quite delicate, they are typically cooked in soup or stir-fried to retain their shape. To make Beef Chow Fun, the beef is first marinated in a mixture of corn starch, sesame oil, and soy sauce before being seared in a swelteringly hot wok. Sliced ginger, Shaoxing rice wine, and chopped spring onions are then added, along with the noodles. Finally, a heaping helping of bean sprouts are thrown in, and the dish is considered ready once they become tender.

It is important that the wok is kept at a very high heat in order to impart what the Cantonese describe as “wok hei” (镬气) or “breath of the wok”, which is said to give the dish a strong umami flavour. Since the ingredients are cooked over a high flame, they must be stirred quickly to prevent the meat from burning but still handled carefully so the noodles don’t break into pieces. Therefore cooking this popular dish is another major test for Cantonese chefs wishing to prove their skill. That being said, don’t turn every meal into an examination, or you might just suck the “fun” out of Beef Chow Fun!