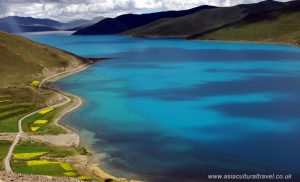 Often described as “the Roof of the World” and “the Land of Snows”, the Tibet Autonomous Region has a certain ethereal allure that has enticed foreign travellers for decades. Yet, beautiful though the region undoubtedly is, it is also shrouded in controversy. Although Tibet was officially a vassal state under the Qing Dynasty (1644-1912), it achieved independence in 1912 and wasn’t reincorporated into China proper until 1951. It was fully open to tourists for a couple of decades, but nowadays non-Chinese visitors are required to apply for a separate Tibet Entry Permit and sign up to a package tour before they are allowed to enter Tibet, as it is still considered a politically unstable region. Occasionally, during times of social unrest, it is even closed to foreign tourists entirely. 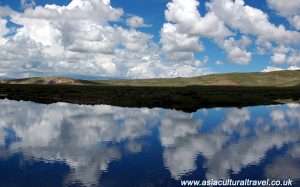 The Tibet Autonomous Region is located on the Tibetan Plateau, which is the largest and highest plateau on earth. With an average altitude of over 4,500 metres (15,000 ft.), it’s no wonder that it has the lowest population density of any region in China. It is renowned for its towering snowy mountains, the most famous of which is the magnificent Mount Everest, which marks the border between Tibet and Nepal. The climate is notoriously harsh, with bitterly cold winters and biting gale-force winds. Winter temperatures regularly drop to a chilling −19 °C (−2 °F) and plummet even further during the night. However, thanks to the low humidity and dry climate, Tibetan summers are generally mild and pleasant, with average temperatures of around 30 °C (85 °F). Therefore it’s usually recommended you plan your visit from June to October, so as to avoid the inhospitable winter months.

Approximately 90% of the population in Tibet is comprised of ethnically Tibetan people, with other ethnic groups such as the Han Chinese, Hui, Monba, and Lhoba people making up the other 10%. The Tibetan people are celebrated for their rich cultural heritage, most notably their dedication to the indigenous religions of Tibetan Buddhism and Bön. Bön is a shamanistic(1) and animistic(2) faith that is widely considered to be the first known religion in Tibet. As Buddhism from India disseminated across Tibet and rose to popularity, it gradually adopted rituals and concepts from Bön, which eventually contributed to the development of Tibetan Buddhism. 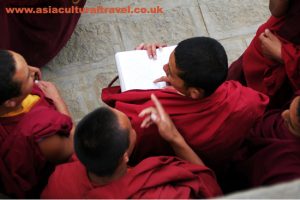 Nowadays Tibetan Buddhism is the more popular of the two, and its most influential branch is known as the Gelugpa or Yellow Hat sect, which was established sometime during the 17th century. This is the sect to which the Dalai Lama belongs, and there are numerous celebrated monasteries dedicated to it, including the Drepung Monastery and the Sera Monastery. From the colourful prayer flags that adorn every household to the decorative prayer wheels outside each temple, the piety of the Tibetan people is palpable wherever you go.

Tibet is renowned for its religious scroll paintings or thangka, which vividly depict lifelike images of Buddhist deities. In fact, many aspects of Tibetan culture revolve around religion, including their beautiful folk songs, dances, and operas. These wonderful spectacles are normally performed in groups during festival occasions and can last for several days, with the central themes being the peoples’ devotion to religion, their love of the land, and the brave deeds of their ancestors. Annual events such as the Monlam Prayer Festival and the Butter Lamp Festival are the ideal place to connect with this vibrant aspect of Tibetan culture.

Religious sites in Tibet are now popular tourist attractions, although it is important to always remember that these are active houses of worship and must be respected as such. The Potala Palace in the capital of Lhasa is undoubtedly the most spectacular and was designated a UNESCO World Heritage Site in 1994. Other places of exceptional beauty include Jokhang Temple, one of the region’s holiest sites, and the Norbuglingka or “Jewel Palace”, which acted as the traditional summer residence for the Dalai Lama until the 14th Dalai Lama’s exile in 1959.

The tranquillity of temples may appeal to some, but others travel to Tibet for far more adventurous reasons! The area is a popular centre for mountaineering, and places such as the glittering Yamdrok Lake, the colossal Yarlung Tsangpo Grand Canyon, and the North Face of Mount Everest have attracted adrenaline junkies from across the globe. With the high altitude and low oxygen count, Tibet represents one of the most challenging arenas for adventure tourism. So, whether you’re a spiritualist or a thrill-seeker, be sure to guard against altitude sickness and take plenty of sunscreen. Tibet may be breath-taking, but you don’t want it to literally take your breath away!

1. Shamanism: The practice of attempting to reach altered states of consciousness in order to communicate with the spirit world and channel energy from it into the real world. This can only be done by specialist practitioners known as shaman.

2. Animism: The belief that all non-human entities, including animals, plants, and even inanimate objects, possess a spiritual essence or soul.