As the provincial capital, Changsha represents the historical and cultural heart of Hunan province. With a history that stretches back over a staggering 3,000 years, its pedigree is without question. Yet, at first glance, you’d be hard-pressed to believe that this glittering metropolis was once a crude Neolithic settlement! From 1935 to 1936, archaeologists excavated the area and found that Changsha was once an integral part of the Chu State, which ruled the region during the Warring States Period (c. 476-221 BC). However, this incredible discovery would prove to be just the tip of the iceberg!

During the 1970s, the celebrated Mawangdui Tombs of the Han Dynasty (206 BC–220 AD) were unearthed. They were originally constructed between 186 and 165 BC, but were in phenomenally good condition for their age. In particular, the corpse of Lady Xin Zhui, who was interred in Tomb No. 1, made international headlines after it was revealed that her mummified body was so intact that doctors were able to perform an autopsy on her. The autopsy confirmed that she had died of a heart attack as a result of poor diet, proving that junk food was just as addictive 2,000 years ago as it is today!

Alongside the remains of Lady Xin Zhui, her husband Marquis Li Cang, and another man believed to be a relative, the tombs were brimming with historical artefacts of great significance, from silk garments and colourful paintings to manuscripts on astronomy, religion, and medicine. These relics gave historians an invaluable insight into life in ancient China, and many of them are now displayed at the Hunan Provincial Museum.

The museum itself is located about 11 kilometres (7 mi) away from one of Changsha’s major attractions: Mount Yuelu. This towering mountain rests on the western bank of the Xiangjiang River and is renowned for its picturesque scenery. Colourful azaleas blanket the area in spring, dense forests provide shade in summer, canopies turn a rich golden-orange in autumn, and in winter it is transformed into a snow-white wonderland. Its natural beauty is matched only by its cultural importance, as it was once the popular haunt of scholars, poets, and monks. The Yuelu Academy, Lushan Temple, Sarira Tower, Yunlu Palace, and Aiwan Pavilion can all be found within its vast expanse. 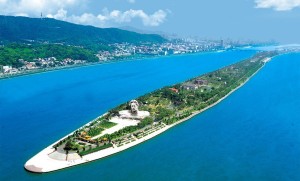 Resting at its eastern foot, the Yuelu Academy was built during the Song Dynasty (960-1279) and was considered one of the four most prestigious academies in China at the time. Numerous revolutionary scholars lectured or studied at this academy, including Zhu Xi, who is widely regarded as the father of Neo-Confucianism. In 1926, it was converted into a college for higher learning and is now the home of Hunan University. It seems the scenery on Mount Yuelu really did inspire revolutionary thought, since the Aiwan Pavilion was supposedly the place where Chairman Mao would relax with his friends while he was studying in the city.

On the luxurious Orange Isle, just 2 kilometres (1 mi) from the East Gate of Mount Yuelu, Chairman Mao has been immortalised in a rock carving known as the Youth Mao Zedong Statue. The island is so-named because of its abundant orange trees, which yield deliciously sweet oranges every year. Since it is the country’s largest inland island, it is sometimes nicknamed the “First Island in China”. With its own beach, park, fountain, fireworks show, swimming pool, and annual music festival, it should definitely be first on your list of places to visit in Changsha! 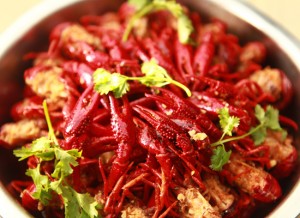 After exploring all of the exciting attractions the city has to offer, you’re sure to have worked up one serious appetite. Fortunately, Changsha is celebrated by gourmands as a hub of Xiang cuisine, one of the Eight Culinary Traditions of Chinese Cuisine. This style of cuisine originates from Hunan province, and is known for its perfect blend of spicy and sour flavours. Huangxing Pedestrian Street is the ideal place to get to grips with the local food, with numerous restaurants and street food stalls offering up an authentic taste of Changsha. From spicy shrimp to the city’s famous stinky tofu, you’re sure to find something to whet your appetite!