Unlike the preceding Qin Dynasty (221-206 BC), which is well-known for the burning of the books and burying of the scholars incident, the Han Dynasty emperors encouraged scholarship and were compulsive record keepers. Even though the dynasty began over 2,000 years ago, its culture and history have been incredibly well-documented. It was during this time that famous literary works such as Records of the Grand Historian by Sima Qian (145–86 BC) were written, and the imperial library boasted an impressive collection of literary texts. A growing civilization meant that the vocabulary of the Chinese language had to adapt to the people’s needs. The first Chinese dictionary indicates that by 121 AD over 9,000 characters were already in use!

The emperors had a particular fondness for works associated with Confucius, and Emperor Wu (r. 140–87 BC) even went so far as to establish the Imperial University in 124 BC, which was dedicated solely to the study of Confucian philosophies. This set the standard for the Classical education that would come to be expected of officials, scholars, and noblemen from the Han Dynasty right up until the Qing Dynasty (1644-1912). However, this Han Dynasty Confucianism was not based on the original ideology of Confucius himself, but was in fact the creation of a scholar named Dong Zhongshu (179-104 BC). He advocated the ethical Confucian ideals of ritual, filial piety, and maintaining a harmonious relationship with the five phases and yin-yang cosmologies. His teachings justified the existence of the imperial government as part of the natural order of the universe, so it’s no wonder the Emperor chose to endorse him!

As well as placing far more emphasis on academic pursuits, the Han emperors were also far more involved with religion. According to Chinese philosophy, not only was the Emperor the centre of the physical universe, but it was also his responsibility to appease the gods. If the Emperor didn’t conform to particular rituals, ethics, and morals, then this could potentially disrupt the cosmic balance and cause catastrophes such as earthquakes, floods, droughts, and pestilence. With the entire physical wellbeing of the country at stake, job responsibilities don’t get much greater than that! Securing the blessings of the deities was one of the Emperor’s solemn duties and, from the time of Emperor Wu onwards, rulers began playing a much more active role in worship and sacrificial rituals. However, as foreign travellers started entering China via the Silk Road, so too did their diverse spiritual beliefs. Sometime during the 1st century BC, Buddhism appeared in the country and, by the 2nd century AD, the Chinese religion of Taoism had begun to take shape. 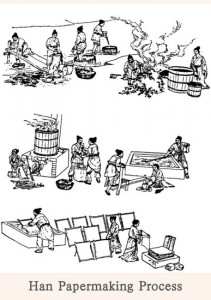 Yet spiritual enlightenment wasn’t the only thing on the Han emperors’ minds; science and technology also saw rapid advancement during their reign. This included the development of a standard papermaking process, the world’s first use of negative numbers in mathematics, and the invention of the mouldboard iron plough, the armillary sphere[1], and the world’s first seismometer. In light of the technological, cultural, scientific, and spiritual developments that were achieved during this time, it’s easy to see why the Han Dynasty is still regarded as a golden age in Chinese history.

[1] The Armillary Sphere: An invention of astronomer Zhang Heng (78-139 AD) of the Han Dynasty, the armillary sphere was a three-dimensional tool used in astronomy to record the movements of celestial bodies. Zhang was also responsible for inventing the world’s first seismometer in 132 AD.