Long ago there was a young princess, who spent lazy afternoons wondering what type of man she would eventually marry. One day, the princess turned to her male servant and asked him, “Who do you think I will marry?”. Without missing a beat and with great confidence, the boy replied: “You are going to marry me”. The princess was deeply offended by the servant’s gross impertinence and, in a fit of rage, grasped a knife from a nearby table and threw it at him. The knife grazed the boy’s forehead, leaving a deep gash that would never fully heal. The princess had him banished from the country and assumed she would never to see him again.

As the boy grew, he worked tirelessly to become successful and eventually became king of a neighbouring nation. Rulers would often use intermarriage to show solidarity between their countries, as was the custom back then, and so a marriage was arranged between the young king and the princess that he had once served. On their wedding day, the princess looked up at her husband-to-be and noticed the deep scar on his forehead. She immediately recognised him as the servant boy she had banished all those years ago and was overwhelmed with remorse. Placing her right hand between his, she twined their hands together as a symbol of her eternal devotion to him.

This simple yet poignant gesture, known as “shu huan” or “the twining of souls”, has become an integral part of Dai marriage ever since. Sometime between the Door Opening Festival and the Door Closing Festival, this thread twining ceremony will take place as part of an engagement ritual before the official wedding. It begins with the host first praying for the couple and then taking a long white thread, which he winds around the couple’s hands. Thereafter other family members will approach the couple and perform the same gesture, followed by other guests such as friends. This act symbolises that the two have intertwined their destinies and will have a long, healthy and happy life together.

On the wedding day, members of the extended family and friends will gather in the bride’s home, where a long bamboo table has been set up. On this table, the bride’s family will have laid out two cooked chickens, a cup of wine with a betel leaf next to it, a bowl of sticky rice, salt, and a white thread. The host is offered the most honoured position at the table, while other relatives and friends arrange themselves around it accordingly. The wedding begins with the bride and groom kneeling before the host as he gives a congratulatory speech. Other guests listen with their right hands firmly on the table to show politeness.

Once the speech is finished, the bride and groom must run for the betel leaf near the cup, as the first person to get to it will supposedly have the final say in future family life! If the same were the case with our tradition of catching the bouquet, I’m sure we’d see a lot more men with flowers in hand! The couple then each pick up a dollop of sticky rice and dip it in the cup of wine as a sacrifice. In much the same manner as before, the thread twining ceremony takes place again. 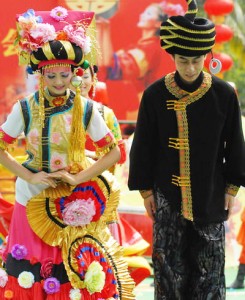 After this second thread twining, the first cooked chicken is given to the host and the other is divided amongst the unmarried men in the hopes that they’ll find love that year. I suppose it’s the Dai way of saying don’t chicken out when it comes to girls! The eldest guest is then asked to knead the sticky rice into a triangle, sprinkle salt on it, and place it on a tripod above a charcoal fire. The rice is allowed to burn and fall off the tripod unhindered, which foretells the stable and unobstructed progress of the couple’s love.

Later on, when the bride becomes pregnant, strangers are forbidden to enter her house at any time. If you happen to notice a special object made of bamboo hanging near the main door of a Dai household, this means that a member of the family is pregnant and nearing childbirth. All visitors will be refused at this time, including family members.