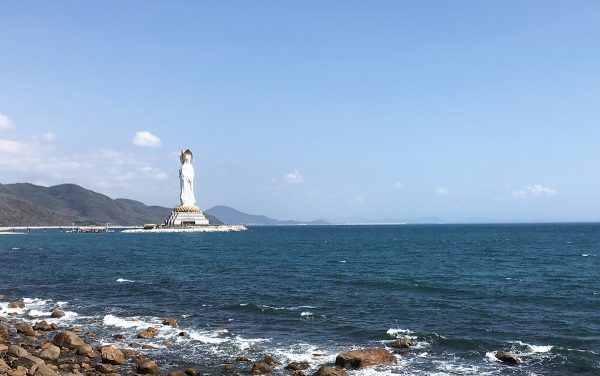 Hainan is China’s southernmost province and is comprised predominantly of Hainan Island, but also includes over 200 smaller, outlying islands. Historically, it was notorious as a place of exile for criminals and disgraced imperial officials. With its pristine sandy beaches, azure waters, and abundant coconut trees, it’s a small wonder more people didn’t commit crimes simply to get banished to this tropical paradise! Even the famous Song Dynasty (960-1279) official Su Shi, who was relegated there in 1094, extolled the beauty of the island in much of his poetry.

The main island is located in the South China Sea and rests south of Guangdong province, with only the narrow Qiongzhou Strait between them. With an area of just over 33,900 square kilometres (13,100 sq. mi), it is the smallest province in China. The island is somewhat oval-shaped and rises towards the southwest to ultimately reach an elevation of over 1,800 metres (6,100 ft.) at Mount Wuzhi, which is its highest peak. The majority of the island is blanketed in verdant greenery, from towering palm trees and exotic flowers to lush bamboo groves and dense rainforests. It even hosts a number of endemic animal species, including the Hainan black-crested gibbon, the Hainan hare, and the Hainan peacock-pheasant.

Hainan’s climate ranges from subtropical in the north to fully tropical in the south, with summer temperatures of around 28 °C (82 °F) and winter temperatures averaging at a balmy 18 °C (64 °F). Since temperatures almost never drop below 10 °C (50 °F) in winter, the island has become a popular resort for tourists desperate to escape their chilly hometowns! However, summer brings with it heavy monsoon rains, frequent tropical storms, and powerful typhoons, so it’s important to check the forecast carefully before planning your summer getaway.

Although the vast majority of Hainan’s population is made up of the Han Chinese ethnic group, about one-sixth is comprised of ethnic minorities. The Li people, who occupy much of the south-central and southwestern regions, are the largest minority group. They are believed to be the original settlers of the island and are descended from ancient tribes that immigrated there approximately 7,000 to 27,000 years ago. Their unique culture, vibrant traditional dress, and lively festivals are a source of fascination for tourists, who regularly flock to Li villages in order to experience their way of life.

From the late 1990s onwards, Hainan was transformed from isolated “prison” to a major tourist destination, complete with sandy beaches, thrilling attractions, gourmet restaurants, and a plethora of luxury resorts. Sanya Beach is widely considered to be the most beautiful, although unfortunately this means it is also the most crowded! Other natural attractions on the island include the Luobi or “Hanging Pen” Cave, a karst cave said to grant visitors the gift of creative writing, and Yanoda, a rainforest where visitors can embark on guided walking tours, slide down zip-lines, and climb waterfalls.

The celebrated Dongpo Academy of Classical Learning, which was first established in 1098 and is located near the city of Danzhou, is arguably the province’s most notable attraction. It was built in memory of Su Shi (Su Dongpo), and incorporates the building where Su gave lectures during his exile on the island. Similarly, the Temple of Five Lords is a temple complex dedicated to five condemned officials from the Tang (618-907) and Song dynasties, and can be found near the provincial capital of Haikou. While some of these officials were only sentenced to a minor 11 days, many of them were banished to the island for upwards of 11 years!

It seems these unruly officials certainly had an effect on the local people, because the Tomb of Hai Rui in Haikou is devoted to a Ming Dynasty (1368-1644) official named Hai Rui, who came from Hainan and famously fell out of favour with the Emperor for speaking out on behalf of his people. In 1589, his many admirers built this tomb in his honour and it has remained a site of outstanding cultural significance in the region ever since.

Combining the island’s natural beauty with its historical importance, the Nanshan Buddhist Cultural Zone in Sanya is yet another one of Hainan’s popular tourist attractions. The zone is made up of a vast rainforest, with countless temples, statues, and scenic gardens dotted throughout its expanse. While the Nanshan Temple is its official centre-piece, its crowning jewel is undoubtedly the 108-metre-tall (354 ft.) statue of the bodhisattva1 Avalokiteśvara (Guanyin), known as the Guanyin of the South Sea. At over twice the size of New York’s Statue of Liberty, it ranks as the fourth tallest statue in the world!

Hainan Island is also a haven for golfers, surfers, cyclists, and numerous other sports enthusiasts. Resorts such as Yalong Bay Golf Club and Sunrise Golf Resort have cropped up to accommodate the expanding golf industry, while competitions like Swatch Girls World Pro China and the Hainan International Surfing Festival invite surfers to test their skill in the South China Sea. That being said, the only competition you may want to take part in is who can get the best tan!

1. Bodhisattva: The term literally means “one whose goal is awakening”. It refers to a person who seeks enlightenment and is thus on the path to becoming a Buddha. It can be applied to anyone, from a newly inducted Buddhist to a veteran or “celestial” bodhisattva who has achieved supernatural powers through their training.