As China’s northernmost province, it goes without saying that temperatures in Heilongjiang can get a little chilly! The region is renowned for its crisp snowy scenery and the International Ice and Snow Sculpture Festival, which takes place in the provincial capital of Harbin, attracts droves of visitors every year. The name Heilongjiang literally translates to mean “Black Dragon River”, the Chinese name for the scenic Amur River which marks the border between China and Russia. Sharing both its northern and eastern border with Russia, it should come as no surprise that Heilongjiang’s architecture and culture has been heavily influenced by its neighbour.

Although the Han Chinese still represent the majority, a substantial number of Russian people call this province home, alongside other ethnic minorities such as the Manchu, Korean, Mongol, Hui, Ewenki, Daur, Oroqen, and Hezhen people. Each of these ethnic groups boasts their own colourful cultures, customs, and lifestyles, from the hardy Hezhen fishermen to the skilled Oroqen hunters. Venturing into the icy countryside of Heilongjiang, visitors are welcome to connect with these fascinating peoples and spend time in their isolated settlements. Just be sure to wrap up warm! 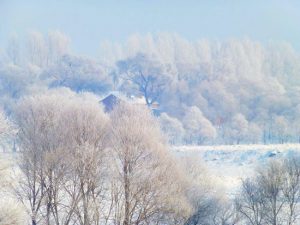 The province has become notorious for its harsh winters, which typically last for five to eight months. With a humid continental climate in the south and a subarctic one in the north, temperatures in January average from −31 to −15 °C (−24 to 5 °F), so don’t be offended if locals in Heilongjiang give you the cold shoulder! The short summers are warm and mild, ranging from 18 to 23 °C (64 to 73 °F). This bitter weather may seem unforgiving, but the province’s numerous mountain ranges are actually home to several endangered animal species, including the Siberian tiger, the Amur leopard, the red-crowned crane, and the lynx.

To the west and the north respectively, the Greater and Lesser Khingan ranges dominate, while the Zhangguangcai and Laoye ranges rise up to the east. Although much of the province is mountainous, the elevations are generally quite low, with very few mountain ranges exceeding 1,000 metres (3,300 ft.) in height. Of the many natural attractions on offer in Heilongjiang, the Wudalianchi Global Geopark and the Jingpo Lake Scenic Resort are undoubtedly the most magnificent. Wudalianchi is a series of five interconnected lakes that were formed when lava from a volcanic eruption dammed a tributary of the Amur River. Alongside the glistening lakes, the geopark boasts a myriad of unusual volcanic landforms, a handful of temples, and its own museum.

Similarly, most of the sights in the Jingpo Lake Scenic Resort were formed thanks to volcanic activity. Jingpo Lake itself is the largest mountain lake in China and is home to the spectacular Diaoshuilou Waterfall. Having been formed by a series of volcanic eruptions that occurred approximately 4,700 to 8,300 years ago, the lake is proof that fire and brimstone isn’t always a terrible thing!

Towering mountains and shimmering lakes aside, the real draw for tourists in Heilongjiang is its gorgeous snow scenery. If you’re feeling particularly adventurous, you may want to take a trip up to Mohe, China’s northernmost town. This region is home to thick Siberian forests, distinctive Russian architecture, and sparse settlements of various ethnic minorities. Thanks to the town’s northerly location, lucky visitors are occasionally treated to stunning views of the aurora borealis.

For those of you who fancy getting up close and personal with the snow, there are a number of fantastic ski resorts dotted throughout the province, the most famous of which is Yabuli Ski Resort. This resort acts as the training centre for the Chinese Olympic ski team and covers two mountains, with a good range of advanced, intermediate, and beginner slopes. You could even test your skills at the Heilongjiang International Ski Festival, although you may prefer spending the day drinking hot chocolate in the lodge instead!