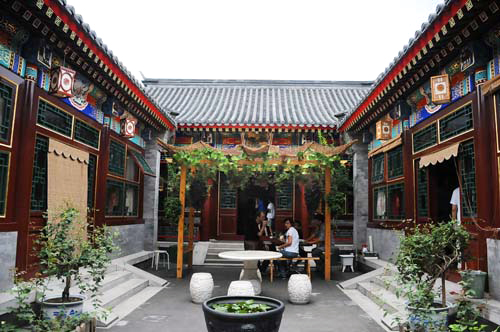 A Chinese Quadrangle is a traditional residential house in the North of China. They first appeared during the Yuan Dynasty (1271-1368). Their shape and size meant they worked especially well in old Beijing, where many of streets and alleys were in a chessboard-like pattern. In fact, the Forbidden City is also made up of differing sizes of these quadrangles.

A Chinese Quadrangle is called Si’he’yuan in Chinese. “Si” (四) means “four”, which refers to the four points of the compass – north, south, east, and west; “he” (合) refers to the surroundings; “yuan” (院) means “courtyard”. A Siheyuan is a closed-in space formed by houses built on all four sides. If the site for the house is small, a one-door quadrangle can be built, but if the site for the house is large, a two-door, three-door or multiple-door quadrangle courtyard can be constructed.

The layout of a Chinese Quadrangle 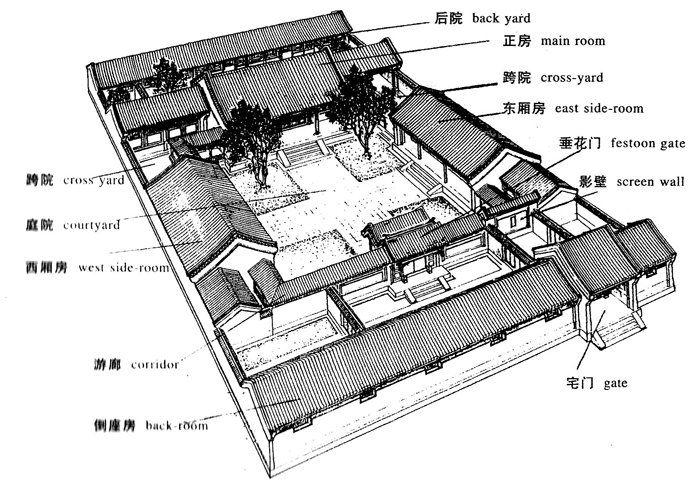 The houses in northern China usually face south so that they are facing the sunrise and thus will get as much light as possible during the day. Most Chinese Quadrangles also face south for the same reason. The center of the principal room in the quadrangle is the base point of the north-south central axis, which is to say it is the central point of the whole complex. The layout of the whole courtyard can be designed in accordance with the size of the site after determining where this central axis will be.

A simple and standard Chinese Quadrangle follows the one-door courtyard layout, which only has one yard and usually sits to the north, facing south. It has high walls to protect the whole property. The door in the southeast corner of the courtyard leads to the gateway and then directly to the main yard after turning left in front of the screen wall1. There is a row of north-facing rooms, named back-seat rooms, which are usually used as living rooms or study rooms because of where they are placed. The rooms in the center of the north side are the main rooms. There are generally three of these main rooms all under one roof, and they are often used as the bedrooms for the elder members of the family. There are one or two smaller, lower rooms on each side of these main rooms. These are called side rooms and are generally used as kitchens and storerooms. Metaphorically speaking, if the main rooms were a head, then the side rooms would look like its ears, so the side rooms are also called the ear-rooms. On the east and west side of the courtyard, there are bedrooms, called wing rooms, for younger members of the family.

The rooms on the four sides of the yard are independent of each other but are all connected by verandas, which makes moving throughout the complex more convenient. 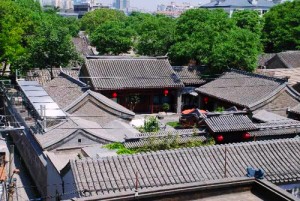 When it comes to the layout of a Chinese Quadrangle, a one-door courtyard can be changed into a two-door courtyard by building a wall to the south of the wing rooms in order to separate the back-seat rooms so that they are outside of the main yard. The gate on this new wall is called the second door. The three-door Chinese Quadrangle can be constructed by building another row of rooms (named backside rooms) behind the main rooms to form another independent yard. Backside rooms are usually used as bedrooms for young female members of the family because of their relative privacy. Both the two-door and three-door Chinese Quadrangle layouts have more living space available than the one door layout and are thus more suitable for a big family to live in.

There is an open space in the centre of the courtyard where the paths are paved with black bricks, cobbles or slab stones that make it convenient and safer to go out on rainy days. Flowers and trees can be planted in the courtyard if it is spacious enough. The locals in Beijing City like having pomegranate trees, Chinese flowering crabapples and oleanders growing in their yards. In addition, they often have a big bowl in the centre of the courtyard that is used to keep goldfish, and the water in the bowl is also kept as a precaution against fire.

The front gate of a Chinese Quadrangle is usually painted black. There are also festoon gates2 and moon gates within the quadrangle that are used to separate the outer and inner yards. Generally speaking, the living room (the room for greeting newly arrived guests), the gatehouse, the garage and the stable are in the outer yard while the inner yard is used for private, daily life.

A courtyard screen wall (called Zhao’bi in Chinese) is a shielding wall that is generally inside or sometimes outside the gate. Its function is to stop passersby from being able to see the inside of the courtyard when the entrance gate is open.

A screen wall can be made from carved tiles, stones, wood, adobe and other materials. Some screen walls are simply colored and decorated while others are intricately carved with patterns or words.

The festoon gate is the most magnificently-decorated door in the Quadrangle Courtyard, and its exterior eaves are usually lavishly painted with greens, reds, blues, whites and other colors, as well as having unique and exquisite floral designs known as festoons on them. There are two inverted, downward-facing pillars on either side of the festoon gate that are usually each carved and have colourful lotus flowers painted onto them.

Try the Quadrangle hotels on our travel: Hiking along the wild Great Wall.