During the chaotic Five Dynasties and Ten Kingdoms Period (907-960), China was fractured into five consecutive dynasties in the north and ten separate kingdoms in the south and west. When the Later Zhou Dynasty (951–960) took control of the country’s northern territories, it had grand dreams of uniting the empire, much like its predecessors. Little did the Later Zhou emperors know that theirs would be the last of the Five Dynasties. The regime enjoyed reasonable success, until the sudden death of Emperor Shizong led to a seven-year-old boy taking the throne in his stead. The atmosphere was ripe for usurpation and a militarist named Zhao Kuangyin wasn’t about to pass up this valuable opportunity.

In 960, Zhao seized the throne during a coup d’état and established himself as Emperor Taizu of the Song Dynasty. Although he may have started his career as a military strategist, Taizu’s real talent lay in the fine art of political manoeuvring. Rather than facing powerful generals in battle, he persuaded them to yield their territories in exchange for honorary titles, cushy government jobs, and generous pensions. This was an un-heard of political strategy in Chinese history, but it worked to Taizu’s advantage. Thanks to this policy of diplomacy, by 979 the Song Dynasty had annexed all of the Ten Kingdoms and united China under its rule. Firm proof that the carrot will always win over the stick!

However, the Song’s limited use of military force would prove to be both its blessing and its curse. The Liao Dynasty (916–1125), which was led by a nomadic group known as the Khitans, loomed ominously on the Song’s northern frontiers and presented a significant threat to the empire. When the opportunity arose to form an alliance with the powerful Jurchen people and potentially destroy the Liao, the Song seized upon it without a second thought. With the Liao thus disposed of, the Jurchen imperials annexed their empire and established the Jin Dynasty[1] (1115–1234).

Since the Jurchens had done most of the fighting, they swiftly became disgruntled with the Song and accused them of not doing their fair share. In a bold move, they denied the Song many of the victory spoils that they had promised during the alliance. This represented the beginning of the long and harrowing Jin-Song Wars (1125–1234). With such a formidable enemy at their gates, the Song were eventually forced to abandon their northern territory and retreated south, establishing their capital at Lin’an (modern-day Hangzhou). This rift in the timeline has led to historians dividing the dynasty into two distinct periods: the Northern Song (960–1127), when the capital was held in the northern city of Bianjing (modern-day Kaifeng); and the Southern Song (1127–1279), when they lost the northern territories to the Jurchens and were driven south.

Although the Song Dynasty had lost control of a valuable region, it continued to prosper thanks to the thriving economy in the south. It wasn’t until the Mongolians overtook the Jin Dynasty in 1234 that the Song imperials finally met their match. In 1271, Kublai Khan, the fifth Great Khan of the Mongol Empire, established himself as Emperor of the Yuan Dynasty (1271-1368). After two decades of sporadic warfare, he was finally able to conquer the Song Dynasty in 1279. In a bizarre twist of fate, it was a non-Chinese people that finally succeeded in uniting China’s territories.

The Song is rarely listed by ancient historians alongside the Han (206 BC–220 AD) and Tang (618-907 AD) dynasties as one of China’s golden ages, but this does the dynasty a great disservice and undercuts the huge cultural impact that this period in history had on the country. Throughout the 10th and 11th centuries, China was so prosperous under the Song government’s rule that the population doubled in size, making it the richest, most skilled, and most populous country on earth at the time! 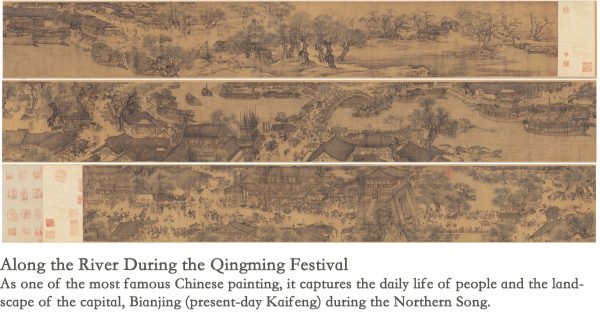 It was also the first time in world history when the government of any country issued banknotes or paper money nationally; it was the first time a Chinese government would establish a permanent standing navy; it saw the first known use of gunpowder; and it was a Song scholar who first discerned true north using a compass. The invention of moveable-type printing during the 11th century and the expansion of woodblock printing meant that literature became cheaper and more widespread, leading to the dissemination of knowledge amongst the masses.

This in turn led to a wider variety of people from a broader spectrum of social backgrounds becoming qualified to take the imperial examinations. Although these examinations had been used to select government officials since the Sui Dynasty (581-618), they weren’t use to great effect until the Song. It was these officials, who were selected based on merit rather than social background, that eventually led to the imperial government become a bureaucratic rather than an aristocratic entity. Meanwhile, highly educated philosophers such as Cheng Yi and Zhu Xi reinvigorated the practice of Confucianism, infused it with Buddhist ideals, and laid the foundations for Neo-Confucianism. From technological advancement to cultural enlightenment, the Song Dynasty was undoubtedly one of the most formative periods in Chinese history.