Zhejiang is a province abounding in culinary traditions, with dishes that are as diverse as they are delicious. While the city of Ningbo has been famous for its sugary confectionaries since the Qing Dynasty (1644-1912), Shaoxing’s gastronomic pedigree in fermented foods stretches all the way back to the Warring States Period (c. 476-221 B.C.)! From coastal delicacies to quick-fried street food, the snacks of Zhejiang are packed full of flavours that have been refined over hundreds of years. After all, the greatest teacher of any skill is time! 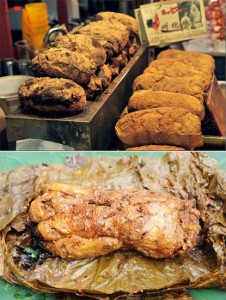 Beggar’s Chicken is a gourmet dish that is so delicious you’ll be begging for a taste! Its unusual name is derived from yet another local legend about a beggar living in Hangzhou during the Qing Dynasty. This beggar was so hungry that he eventually stole a chicken from a small farm. The farmer chased him down to the riverbank and, in a desperate effort to hide his loot, the beggar buried the chicken in mud before fleeing the scene. When night fell, he returned to the river and retrieved the chicken from the muddy bank. He had no oven to cook with, so he simply lit a few twigs and set the mud-soaked chicken over the bonfire.

After some time, a light brown crust formed over the chicken and, when it was cracked open, the feathers miraculously dropped off. All that was left was the chicken’s meat, which was so moist and tender that the beggar couldn’t believe his luck. In some versions of the story, the Emperor happened to pass by the beggar and was drawn in by the chicken’s sumptuous aroma. Supposedly the Emperor was so taken by this flavourful dish that he had it added to the imperial court menu! Needless to say, the beggar soon started selling his unique creation to the local villagers and wasn’t a beggar for much longer. Nowadays, the chicken is normally stuffed with aromatic spices, wrapped in lotus leaves or a flour-based dough, and baked over a low heat for upwards of 6 hours, although some restaurants still follow the traditional method of covering the chicken with clay. After all, you shouldn’t muck about with a centuries-old recipe! 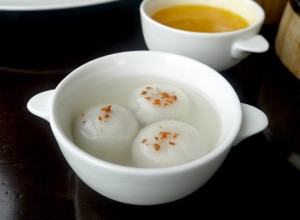 Ningbo Rice Balls or Tangyuan are one of the city’s most celebrated confections. Tangyuan are a popular festival food throughout China and are believed to have appeared sometime during the Song Dynasty (960-1279), although they didn’t reach significant popularity until the Ming (1368-1644) and Qing dynasties. Like many great innovations, it seemed that these sweet dumplings were a little before their time! They are made using glutinous rice, which has been rolled into the shape of a ball and boiled, steamed, or fried before typically being served in a syrupy soup. Stuffed tangyuan are made by first rolling the filling into a ball before wrapping a flattened piece of glutinous rice dough around it. The best tangyuan must have a chewy skin that does not stick to your teeth and are said to be so soft that you can push the filling out with a small bite.

The Ningbo variety is marked by its distinctive filling, which is made using lard, soft white sugar, and black sesame paste. The lard melts as the tangyuan are boiled, softening the black sesame paste and sugar into a tantalisingly sweet syrup. Although these squishy treats are traditionally eaten during the Lantern Festival, locals in the Ningbo region love them so much that they even eat them for breakfast on the morning of Chinese New Year! Nowadays they are no longer exclusively a festival food, and are served as a dessert or simply as a sugary snack throughout the year. 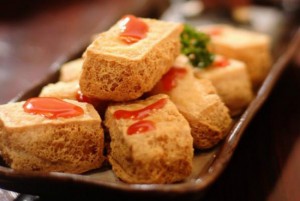 The name “stinky tofu” hardly inspires one with confidence. Comical though it may seem, this unusual epithet is tragically not a mistranslation. Foreigners and locals alike have described the snack’s odour as resembling “rotting garbage” or “an open latrine”, so it goes without saying that you might want to keep a nose-peg handy if you fancy trying this strange dish! The distinctive aroma originates from the liquid that the tofu is fermented in, known as lu or fermenting brine.

It is made using woody amaranth stalks that have been covered in cold water and left in a clay pot until they start to rot. This process normally takes between 2 to 4 days, and the resulting brine is so pungent that people unused to the smell can’t stand to be near it. The amaranth stalks are then removed and served up as part of their own dish; one of Shaoxing’s well-known chou mei or “stinky and rotten” delicacies!

Batches of tofu are soaked in a mixture made from this brine, along with fermented milk, mustard greens, bamboo shoots, and Chinese herbs. This formula varies from region to region and individual to individual, so each batch of stinky tofu has its own unique stench! Once it has been left to ferment for a number of days or even months, the tofu is removed and is either deep-fried or steamed. The stinky tofu eaten in the average household is normally steamed with green beans, while tofu sold at street food stalls is usually deep-fried and served with a hot chilli sauce. This odorous delight is said to have a strong, mature flavour that somewhat resembles blue cheese. Apparently, the smellier the tofu is, the better it tastes! 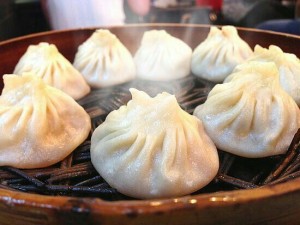 Originating from the small northern county of Shengzhou, these steamed buns or xiaolongbao may not be as famous as their counterpart in Shanghai, but they’re certainly no less delicious! Unlike other regional delicacies, which normally have histories dating back hundreds of years, Shengzhou Steamed Buns are a relatively new culinary treat. They were the brainchild of Tu Fuyuan, a local from Yuxi Village who travelled to Guizhou province during the 1980s in order to make money for his family.

He ended up working as an apprentice under a local steamed bun merchant and, after learning the basics, he returned home to open his own steamed bun shop. His buns were so popular that they even spawned a string of copycats, who each attempted to recreate Tu’s original recipe. After all, imitation is the sincerest form of flattery! Nowadays authentic Shengzhou Steamed Buns must be made with top-quality rice flour, fresh meat, and five different seasonings, including the local rice wine. These scrumptious dumplings are normally steamed on a bed of fresh vegetable leaves, in order to give them an aromatic boost.