Like many of China’s ethnic minorities, the Bouyei celebrate several of the traditional Chinese festivals, including Spring Festival. They also follow a few of the Zhuang’s festivals, such as the Ox Soul Festival, but have a few festivals of their own, which normally revolve around their religious beliefs and may differ depending on where you are. 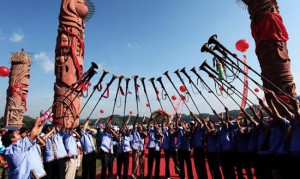 Though the Zhuang ethnic minority also celebrate the Sanyuesan Festival, the two versions of this festival have vastly different origins. The name “Sanyuesan” literally means “March 3rd” so it’s unsurprising that the festival is held on the 3rd day of the 3rd month according to the Chinese lunar calendar, although it usually falls sometime during April in our calendar. The festival honours the God of the Mountain and on this day villagers will make sacrifices to him in the hopes that he will protect their livestock and provide them with a good harvest in the coming year.

As with all good festivals, they celebrate by singing, dancing and having a feast. Five-coloured rice is the feature dish and it is made using rice that has been coloured red, black, purple, white and yellow using natural plant dyes. In fact, this rice looks so marvellous that it’s hard to tell whether you’re meant to eat it or appreciate it as a work of art! In the Bouyei villages near Guiyang they normally hold a song contest and they believe that the winner will be blessed by the gods with a golden throat, which endows the singer with the ability to scare off harmful pests and birds from their crops when they sing! 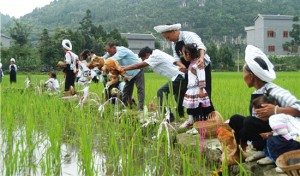 Like the Sanyuesan Festival, this festival revolves around a particular date, namely the 6th day of the 6th lunar month. However it actually falls sometime during July according to our Gregorian calendar. It is a time for the Bouyei people to worship the God of the Fields, the God of Land, and the God of the Mountain as well as the legendary Pangu, who created the earth according to Chinese mythology and supposedly died on June 6th. Typical offerings to the gods include paper figures, paper horses, wine, meat, and a type of rice dumpling known as zongzi. In some regions, the plough, rake and other farm implements will be placed in a shrine in the hopes that they will be blessed. Along with making sacrifices, people celebrate by dressing in their traditional outfits, singing in antiphonal style and dancing to the rhythm of several instruments. 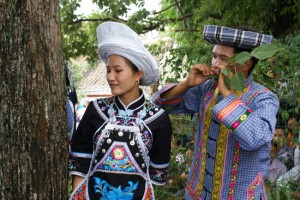 This festival takes place on the 21st day of the 6th lunar month and so usually falls sometime during July. It’s a huge event where tens of thousands of people will gather from neighbour villages, counties and even provinces to engage in a series of singing competitions. Just when you thought X-Factor was an original idea, it seems the Bouyei have been doing it for years! During the day, the contests will be held in an arena but in the evening they will be performed in the courtyards and homes of the local villagers.

The festival dates back to the Ming Dynasty (1368-1644) and is celebrated in remembrance of two young lovers named Chalang and Baimei, whose names are combined in the festival’s title. Chalang and Baimei fell in love at first sight but a local landlord, who coveted the beautiful Baimei, killed Chalang and kidnapped the girl against her will. The landlord forced her to marry him but, during the wedding, she set fire to the landlord’s house and threw herself upon the flames. Baimei’s devotion to her lover Chalang even after death is a testament worth honouring, but probably not repeating!

This is more of an annual ceremony than a festival and it takes place on the 1st day of the 6th lunar month, so it also falls sometime in July. Before the ceremony, all of the villagers will contribute some money to pay for the wine, pigs, and chickens that will be used as sacrifices. A bumo or local shaman presides over the ceremony and performs invocations asking the gods to protect the village and its people.

The bumo will visit every house in the village and at each house he will ask “Does the demon leave, or not?” To which another bumo will reply “He leaves”. So, if you ever have a demon squatting in your house, don’t call in an exorcist, just politely ask him to leave! Once the bumo have cleansed every house, they will place a talisman at the village gate which will prevent evil from entering. In the evening, all of the villagers will gather at the temple of the God of the Village and take part in a sumptuous banquet, where they will eat, drink, sing and dance late into the night.