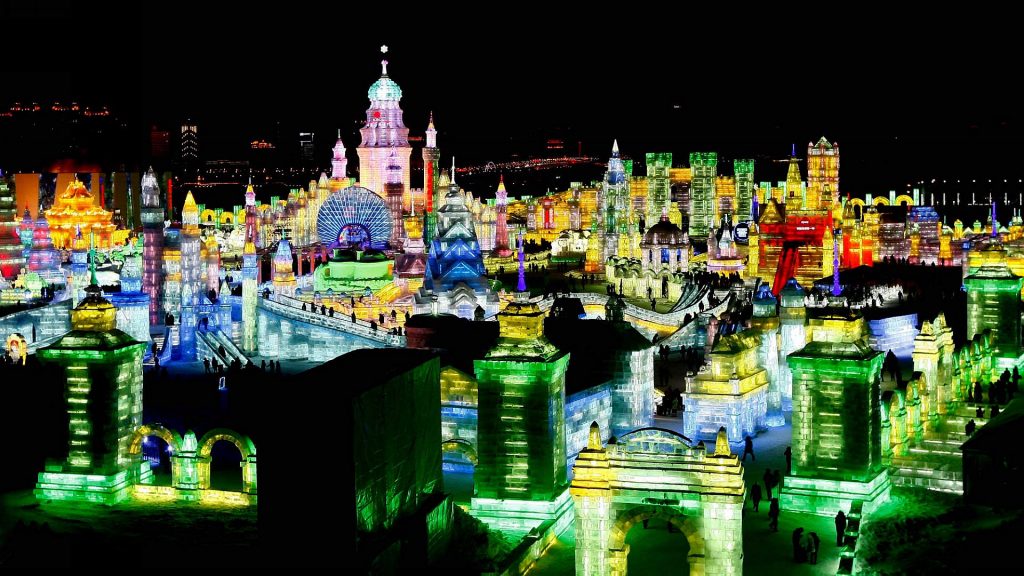 During the Qing Dynasty (1644-1912), local farmers and fishermen in northeast China would look forward to the bitterly cold winter, when temperatures would frequently drop to below -30°C (-22°F) and snow would lay claim to the landscape for upwards of seven months. While most people would dread such harrowing weather, they welcomed it, as it meant they could practice their most beloved winter-time tradition: the making of ice lanterns. First, they would simply pour water into a bucket and leave it outside to freeze. Once it was almost frozen solid, they would gently warm the sides of the bucket and ease the block of ice out.

They would then chisel a hole in the top and any water remaining inside would be poured out, creating a hollow vessel. A candle would be placed inside the hole, thus producing a windproof lantern that could be used as a jack-light to guide the farmers and fishermen during the long winter nights. As time went on, the popularity of these ice lanterns grew and people began using them as decorations. Artisans would fashion progressively more delicate and artistic lanterns until finally, in 1963, the Ice Lantern Show and Garden Party was born in Heilongjiang province’s capital of Harbin. 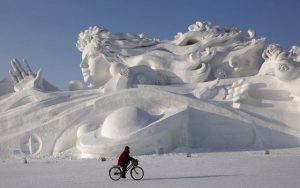 Although it was briefly interrupted during the Cultural Revolution (1966-1976), the festival returned with new force in 1985 and gradually developed into a much larger event known as the Harbin Ice Festival, with magnificent ice and snow sculptures blanketing the city for months at a time. In 2001, it was combined with Heilongjiang’s International Ski Festival and was given a new official title: the Harbin International Ice and Snow Sculpture Festival. Informative though this title undoubtedly is, many people choose to save time by truncating it back to the Harbin Ice Festival!

Nowadays it has grown to become the largest winter festival in the world, taking up over 600,000 square metres (6,458,346 sq. ft.) of space and attracting about 10 to 15 million visitors every year. It is usually held from the end of December right through to the start of February, and boasts the tallest ice sculptures of any event in the world, with some of the “ice buildings” towering in at 46 metres (151 ft.) in height. In terms of location, the festival is separated into three main exhibition areas: Sun Island, Ice and Snow World, and Zhaolin Park.

Sun Island is an island resting within the Songhua River that is used as a recreational area throughout the year. During the festival, enormous snow sculptures dominate the island, delighting visitors with their grandeur and elegance. They are made using compacted snow, which helps to preserve their shape, and are best viewed during the day, as they are not lit up at night. If you happen to be traveling in Harbin outside of the festival times, don’t fret! The Ice and Snow Art Hall on Sun Island is a refrigerated indoor arena where award-winning snow and ice sculptures from the festival can be viewed year-round. 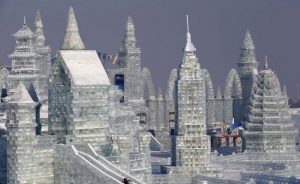 While Sun Island is undeniably impressive, the festival’s star attraction has always been Ice and Snow World. Over 15,000 people work tirelessly for 16 days in order to create a miniature city made entirely out of ice, complete with dazzling ice sculptures, slides, mazes, and skating rinks. Many of these “ice buildings” are made using ice from the Songhua River and are recreations of real buildings from across the world, such as the Great Sphinx of Giza in Egypt and the Hallgrímskirkja in Iceland. Some of these icy constructions are so large that you can even walk inside them!

Ice and Snow World dazzles during the day, but doesn’t truly come to life until night-time. When the dark sets in, colourful lights illuminate the ice and produce a truly breath-taking spectacle. If you’re feeling particularly adventurous, this area also offers numerous unusual activities, including ice rock-climbing, ice archery, ice golf, and raucous snowball fights. Nothing gets you in the festive spirit quite like pummelling your friends with snowballs! 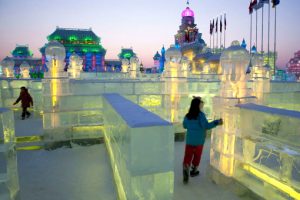 Although Ice and Snow World and Sun Island are the two largest venues, Zhaolin Park was the place where the magic all started. It was the site of the original Ice Lantern Show and Garden Party, and to this day remains the display area for the glittering ice lanterns. Much like Ice and Snow World, it is best visited in the evening, when the lanterns are lit up and shimmer like colourful beacons in the frosty night air. The display is typically constituted of over a thousand lanterns, some of which are carved by the locals themselves. They may not be as colossal in scale as those exhibited in the other areas but their designs, which are usually of mythical characters or animals, are beloved by children. After all, this wintry fairy-tale wouldn’t be complete without a few magical creatures!