With its 72 peaks jutting majestically into the sky, Mount Heng[1] creates a striking tableau in the countryside of Hunan province. Its beauty has earned it the status of “Nanyue” or “South Mountain”, marking it as one of the Five Great Mountains of China. The mountain range itself stretches for a colossal 150 kilometres (93 mi), with Huiyan Peak at its southernmost point and Yuelu Mountain at its northern tip. At a staggering 1,300 metres (4,266 ft.) in height, Zhurong Peak is its highest elevation. Although its natural scenery and cultural significance has attracted a number of visitors, it is probably the least-visited of the Five Great Mountains and makes for an enjoyable hike if you want to escape the tourist crowds.

Many of the forests that blanket its peaks are primeval, with trees averaging at an age of 300 to 400 years and some that are over 1,000 years old. Bent-double and covered in lichen, they somewhat resemble elderly men hunched over from the pain of old age! From rolling clouds to meadows resplendent with colourful flowers, Mount Heng is full of stunning panoramic views. Its spectacular scenery during the four seasons is often described as the “four oceans”: an ocean of flowers, an ocean of trees, an ocean of clouds, and an ocean of snow. 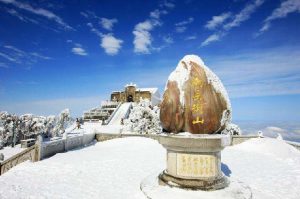 The city of Hengyang acts as a gateway to the mountain, although the town at its base is eponymously named Nanyue. Since it is regarded as a sacred mountain, its expanse is littered with marvellous temple complexes and ancient inscriptions. Hidden among the dense pine forests and lush canyons, they have remained as a testament to mankind’s fascination with the mountain. Evidence suggests that scholars and members of the imperial family were visiting Mount Heng as early as 2,000 years ago, leaving stone inscriptions of poetry in their wake.

During the Han Dynasty (206 BC–220 AD), Taoism made its way to the mountain and Taoists designated various “blessed spots” where they would practice their faith. By the Tang Dynasty (618-907), ten large Taoist temples and eight hundred bamboo houses had cropped up to accommodate the influx of Taoist priests. About 200 years after Taoism’s arrival, Buddhism was introduced to Mount Heng. During the Northern and Southern Dynasties Period (420-589), a large group of accomplished Buddhist monks settled there and gradually formed their own religious sects, the most influential of which was the Tiantai Sect. Many of the philosophies that these monks expounded ended up significantly affecting Buddhist religious practices not only in China, but also in Japan and Southeast Asia.

At the foot of the mountain, you’ll find the largest temple complex in southern China, the Grand Temple of Mount Heng. Although its founding year is technically unknown, records indicate that it was built in the year 725. Throughout the Song (960-1279), Yuan (1271-1368), Ming (1368-1644), and Qing (1644-1912) dynasties, it suffered through six fires and underwent 16 large-scale renovations. In 1882, it had to be almost completely rebuilt after being burned down, and it was constructed following the layout of the Forbidden City in Beijing. This earned it the nickname “Little Palace in South China”. As a testimony to the mountain’s multi-religious nature, the temple’s eastern wing is made up of the Eight Temples of Taoism and its western wing hosts the Eight Temples of Buddhism.

However, the highlight of any trip to Mount Heng is undoubtedly seeing its Four Wonders: Zhurong Peak, Water Curtain Cave, Fangguang Temple, and the Sutra[2] Collection Hall. These are famed for their height, oddity, spiritual depth, and architectural elegance respectively. Three may be the magic number, but four is evidently the most wonderful!

[1] This is not to be confused with Mount Heng in Shanxi province, which is also one of China’s Five Great Mountains.