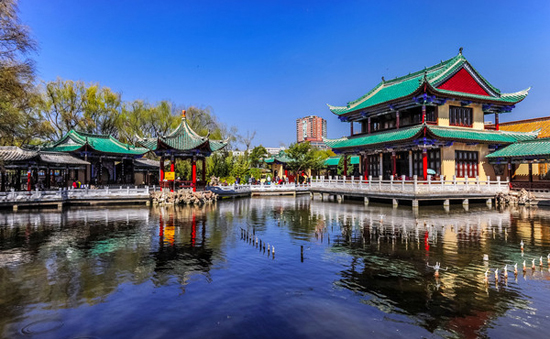 In most places across the globe, seagulls are regarded as vermin, but in Kunming they are met with admiration, flocks of visitors, and heaps of tasty titbits. That being said, these are not just any seagulls. These are the rare black-headed seagulls, which have migrated from Siberia to Kunming every winter since 1985. From early November through to late May, Cuihu Park plays host to a flurry of lively seagulls as they prepare to settle down for the temperate winter in the city. With its verdant islets, emerald pools, towering pavilions, and tropical forests, it’s no wonder that seagulls and humans alike descend on the park every year to take advantage of its many attractions.

Back during the Yuan dynasty (1271-1368) the site of Cuihu Park was just a swampy marsh that locals used to grow vegetables, lotuses, and rice, earning it the name “Vegetable Lake”. It was originally part of Dianchi Lake, but as the water-table dropped it eventually separated, leaving behind the Green Lake or “cuihu” (翠湖) that merited the park its current name. The park consists of about four small sub-lakes and four islands that are connected by elaborately decorated bridges. These are Mid-lake Island, Goldfish Island, Bamboo Forest Island, and Palm Island. Each island has its own unique delights on offer, from watching the shimmering carp meander through the lakes to relaxing with a picnic under the shade of tree.

On Mid-lake Island you’ll find the Lotus Temple, Fish-Viewing Pavilion and Mid-lake Pavilion. A part of the Mid-Lake Pavilion, known as the Water Moon Pavilion, was once the site of one of the earliest cinemas in China. Nowadays the entirety of the pavilion is used by locals for recreational activities, such as practising Tai Chi, singing, and the playing of traditional instruments. If you’re lucky, you may even catch some of the elderly local women dancing there at night. These women may be older, but they still know how to have a good time! At festival time, this pavilion plays host to a myriad of wonderful performances, such as lantern shows and flower shows. Unsurprisingly, the Fish-Viewing Pavilion is a platform where visitors can admire and feed the resident koi carp as their while away their lazy days in the lake. But be warned, if you try feeding the fish during winter you may end up with a flock of jealous seagulls instead!

In the northeast of the park, near the Bamboo Forest Island, you’ll find the Nine-Dragon Pond. This is in fact a spring, not a pond, and earned its name because the water trickles from nine holes, which the locals believe are home to nine dragons. The Bamboo Forest itself boasts an array of bamboo species, including several varieties of the rare Chimonobambusa. These towering poles of stunning, hollow grass are both beautiful and rather haunting. With all this tantalising bamboo around, it’s a small wonder Kunming isn’t overrun with pandas.

In the southwest section of the park, the aptly named Palm Island is host to a variety of verdant tropical plants. This sudden burst of colour in the middle of the city provides locals with a welcome slice of nature and is also a perfect place to have a picnic. The famous statue of Nie Er, composer of the Chinese National Anthem, stands proud on this island. Nie Er originated from Kunming and it was rumoured that he liked to practise playing his instruments near the Green Lake. It is easy to see how Nie Er composed the rousing tunes of the national anthem in a place as inspiring and peaceful as Cuihu Park.

The park is so treasured by the locals that they often refer to it as the “Jade of Kunming”. With its luscious tropical vegetation, calm clear waters, zigzagging bridges, and lavishly decorated architecture, the park looks like a watercolour painting poised in the centre of the bustling city. From its gate, lined by the finest restaurants, teahouses and hotels in the city, to its serene bamboo groves and crystal-clear springs, you’ll be sure to while away many peaceful hours in Cuihu Park.