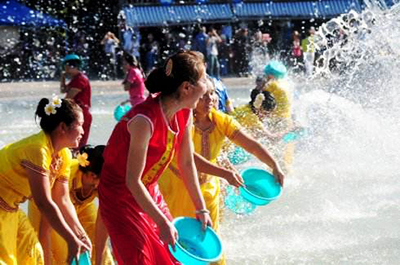 The Dai calendar begins with a New Year celebration known as the Water Splashing Festival, which takes place sometime in April and is their first Buddhist festival of the year. It is sometimes called “Shanghan” or “Jingbimai” in the Dai language, meaning “New Year”, but is more often referred to as “Hounan” or “Water Splashing Festival”. The jovial nature and lively atmosphere of this festival has earned it great fame throughout China. That and it provides anyone with the opportunity to douse their friends in water!

The first day, known as “Wanduoshanghan” or “New Year’s Eve”, is marked by dragon-boat races and the firing of gaosheng (a type of homemade firework). These acts symbolise saying goodbye to the old year. The following two days are called “Wannao” and involve similar activities. The final day of the festival, known as “Wanbawanma” or “when the King of Days comes”, is the most famous and involves the characteristic water splashing. Early in the morning, all of the villagers will take a ceremonial bath, change into new clothes, and carry offerings to the local temple. On arrival, they will build a tower of sand and arrange themselves around it. There they will listen to the preaching of Buddhist scripture and then help clean the temple.

Finally a statue of Buddha is carried out of the temple and is bathed by the local women. This is followed by a more playful display, where villagers splash one another with water. This water fight, so to speak, can involve anyone who happens to be passing by and is a favourite pastime among younger members of the community. It is punctuated by the sprightly sound of elephant-foot drums and bronze gongs. The Dai believe that anyone who is splashed with water during the festival will have good luck in the following year, so splashing someone is a sign that you are wishing them well. There is even a popular Dai saying which goes: “At the Water Splashing Festival, soak whoever you think is worthy”.

The origin of the Water Splashing Festival is rooted in an ancient legend involving a demon that once plagued the Dai people. Long ago, the Evil King of Fire descended on the Dai homeland and perpetrated all kinds of misdeeds. The local people hated him bitterly but his powerful magic meant no one was capable of opposing him. He had already taken seven beautiful wives from the community, who all despised him, but one day the seventh wife hit upon an ingenious plan. She grew close to the demon and persuaded him to expose his weaknesses. It turned out the demon was impervious to human weapons but his hair, which was sharp as razor wire, could harm him.

Once he was sound asleep, all of the wives gathered by his bedside and wrapped his hair around his neck. With one mighty pull, the hair sliced through the demon’s throat and cut off his head. However, once the head touched the ground it caught fire and would have burned down their bamboo house were it not for an act of selflessness by one of the women. Swiftly she rushed to scoop up the head and held it tightly in her arms. To her amazement, the fire died out immediately. Yet as soon as she dropped the head it would start burning again.

So the seven women agreed that each year they would take turns holding onto the head, exchanging it only on the fateful day when they killed the demon. When the time came to pass the head on, the local people would splash water on the girl who had previously held the head to wash away the demon’s blood. Over time, this ritual came to signify the beginning of a new year and developed into the happy festival we know today.

If you’ve read any of the legends behind many Dai customs, you’ll know that the Dai people have something of a complicated relationship with dragons! On the one hand, dragons can bless man with a good harvest, but they can also be vicious and dole out punishment indiscriminately. The Dai regard dragons as deities and the Dragon Homage Festival, which normally falls sometime in January, is the closest celebration in the Dai calendar to the traditional Chinese Spring Festival.

During this festival, a monk from the village temple will arrange a collection of food and clothing to be sacrificed to the Dragon God. Every villager must contribute, regardless of their wealth or social standing, but gifts will be commensurate with one’s wealth. For example, a rich family might offer gold or silver while a poor family may simply offer rice or flowers. All offerings are placed inside the temple, where they are preserved in a makeshift “Dragon Palace”. When the time comes, the monks carry the “Dragon Palace” down to the Menglong River and place it on a bamboo raft. The raft is then left to float away while the locals pray and the monks chant Buddhist scripture.

Other Dai festivals include the Door Closing and Door Opening Festivals, which take place in mid-September and mid-June respectively. They predominantly involve the sacrifice of food, flowers, clothes, and other wealth to Buddha.