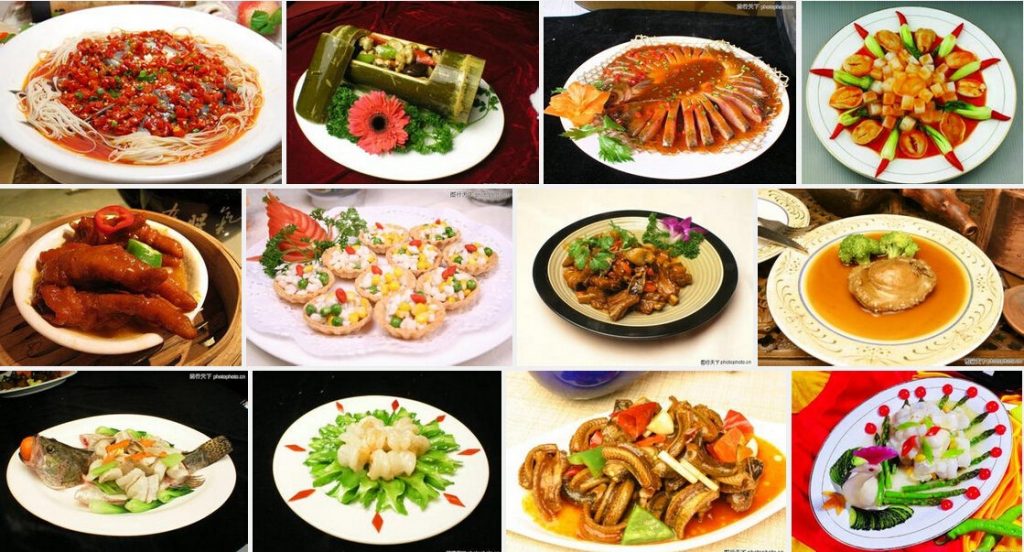 Jiangsu or “Su” cuisine is heralded as one of the Eight Culinary Traditions of Chinese Cooking and its subgroup, Huaiyang, is even considered to be among the Four Great Traditions of Chinese Cuisine. It was once the second most popular style among the imperials and is now frequently served at state banquets. With that in mind, you’re pretty much guaranteed to enjoy your stay in Jiangsu; or at least, your stomach is! This style of cooking places emphasis on presentation, meaning local specialities are as visually pleasing as they are mouth-wateringly delicious. Chefs train for years in order to perfect how to carve, sculpt, shape, and pair certain foods for the ultimate visual feast.

In terms of flavour, this style aims to draw out the natural essence of its ingredients through various cooking techniques, so seasonings and spices are used sparingly. This means that its signature dishes are sumptuously aromatic, slightly salty, moderately sweet, and glide across the tongue, leaving a strong sense of flavour without being oily or greasy. The ingredients are usually seasonal and are chosen not only for their taste, but also for their unique medicinal properties. Since Jiangsu is a coastal province, fish and other types of seafood feature prominently, along with pork, lotus root, Chinese chestnuts, water bamboo, and water chestnuts. With all of this aquatic goodness, you’ll practically be swimming in scrumptious food!

There are four different regional styles of Jiangsu cuisine: Jinling, Suxi, Xuhai, and Huaiyang. The Jinling style originated from the provincial capital of Nanjing and is famous for its duck dishes, as well as its fine cutting techniques and delicate preparation. The Suxi style developed around the cities of Suzhou and Wuxi, and is distinctly sweeter than the other styles, with a strong emphasis placed on the use of seasonal vegetables.

The Xuhai style, which originates from the cities of Xuzhou and Lianyungang, is the least famous of the four and combines a perfect mixture of sweetness, sourness, bitterness, heat, and saltiness. Last but certainly not least, Huaiyang style is praised as the finest of the four and is centred on dishes from the cities of Yangzhou and Huai’an. It is rumoured to have originated from chefs who worked for wealthy Qing Dynasty (1644-1912) salt merchants living in Yangzhou, proving once and for all that a golden key can open any door, particularly the ones to the best restaurants! 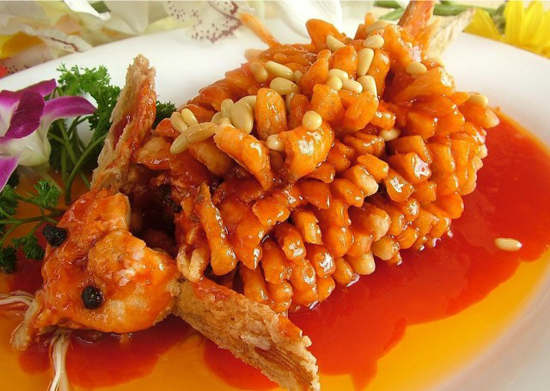 This dish is so famous and so prevalent throughout China that it’s now considered one of the emblematic dishes not only of Jiangsu cuisine, but of Chinese cuisine as a whole. Yet you wouldn’t be the first person to be confused by its rather unusual name! According to local legend, the Qianlong Emperor of the Qing Dynasty was touring the area south of the Yangtze River when he decided to stop at a restaurant in Suzhou. The chef knew that he had to pull out all of the stops to impress the Emperor, so he took the meatiest mandarin fish, covered it in egg-yolk paste, and fried it before delicately cutting it, shaping it, and serving it with his homemade sweet and sour sauce. The Emperor praised the dish for its novel presentation and savoured the crispy golden strips of fried fish.

From then on, Squirrel-Shaped Mandarin Fish has remained one of the finest gourmet dishes in China. In order to make the dish, the chef first cuts the flesh of the mandarin fish into a delicate pattern resembling a blossoming flower and then covers the tender white flesh in a mixture of starch and eggs. The fish is deep-fried until it turns a crispy golden brown before being arranged on the plate with its mouth wide-open and its tail bent upward. A sizzling sweet and sour sauce is then poured over the freshly fried fish as it is presented to the lucky gourmand. The golden-brown colour of the flesh and the shaping of the fish are designed to make it look like a squirrel, while the crackling sound of the hot sauce being poured over the meat is said to resemble a squirrel’s chirrup. Moulding a fish to look like a squirrel may seem a little fishy, but trust us; this dish is as delicious as it is strange! 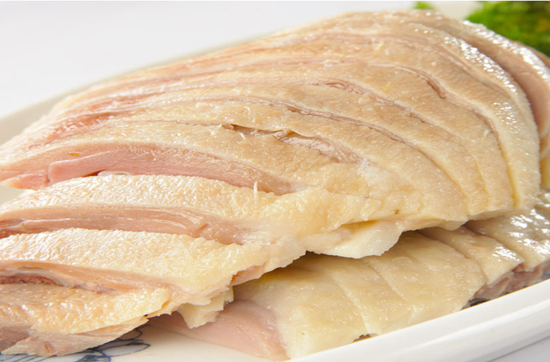 According to local legend, when Nanjing was the imperial capital, the Hongwu Emperor of the Qing Dynasty was desperate to solve the city’s noise problem and issued an edict demanding that all of the resident roosters be killed, in order to stop them from waking him up. The city was certainly quieter, but people suddenly realised that they had no chickens to eat! The citizens turned their hungry gaze towards the local duck population and this is supposedly the reason why Nanjing is so famous for its duck dishes. And it seems the locals have really gotten creative with this one ingredient, because Nanjing Salted Duck is one of the most complicated dishes to cook!

It takes approximately two days for the duck to properly marinate in a rub made from Sichuan peppercorns and salt before it can be boiled in the master stock, which is a fragrant broth made from ginger, spring onion, rock sugar, sea salt, star anise, cinnamon, fennel, cumin, Sichuan peppercorns, whole dried citrus peel, and liquorice root. Even after the duck has been simmered in the broth, it still needs to be left to infuse overnight before it can be served. So, if you’re feeling a little bit peckish and want some fast food, you might want to reconsider this dish because the only thing you’ll be consuming is time!

Nanjing Salted Duck is celebrated for its tender meat and fatty but not overly greasy flavour. Supposedly the best time to eat it is shortly before or after mid-Autumn, during the sweet osmanthus blooming season. During these months, osmanthus is added to the spice mixture to give the duck a boost of aromatic flavour. Just start preparing right away, or the season might have ended before you even finish cooking the duck!

Unusual names seem to be something of a trend in Jiangsu cuisine! Once again, this dish is named for its shape rather than its content, so don’t expect to be presented with a roaring lion’s head anytime soon. It is made using minced meat (usually pork but occasionally beef) that has been mixed with chopped water chestnuts, spring onions, ginger, and eggs for texture and then rolled into large meatballs, about the size of your hand. It is imperative to use fatty meat, as lean meat will result in the meatballs being too dry.

There are two distinct varieties of this robust dish: White or Plain Lion’s Head and Red Lion’s Head. The plain variety is simply stewed or steamed with Chinese cabbage and served with a clear soup, while the red variety is stewed in soy sauce with either Chinese cabbage or bamboo shoots and tofu. The large meatballs are said to resemble the head of a lion and the surrounding cabbage looks like its mane, which is how the dish earned its extraordinary name. These ferocious meatballs are packed with umami flavour and a pleasant saltiness that just glances across the tongue.