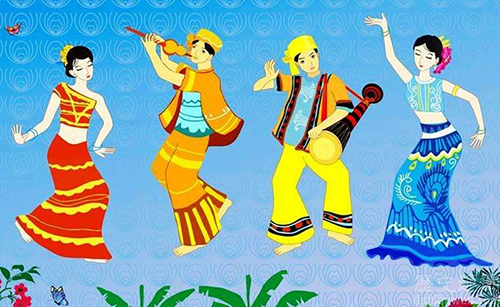 In their multi-coloured silk skirts and tight-fitting shirts, the Dai women look as fragile and beautiful as flower petals. Their clothes, particularly their underclothes, are normally block, pastel-colours such as sky blue, spring green, blossom pink, or snow white. Traditionally their short shirts expose a portion of their lower back and have a bejewelled collar. They button down the front or the right side, and can be sleeveless, short-sleeved, or long-sleeved.

The accompanying skirt or sarong is tight-fitting, narrow and long, ranging from calf to floor-length. In some areas, women will wrap multi-coloured silk girdles around their waist to further emphasise their slender midriff. Resplendent in their simple elegance, with their long hair curled in a bun and fastened by a decorative comb, the Dai appear like lithe pixies gliding through the tropical rainforests.

With such a wealth of natural beauty, the women rarely bother with embellishments but some young women will decorate their hair with fresh flowers while older women will wear a bamboo straw hat for practical reasons. Although jewellery is not as popular among the Dai as it is with other ethnic minorities, they will sometimes wear silver earrings, necklaces, and bracelets, and are fond of articles made from jade, agate or coloured glass.

Historically, a bizarre tradition amongst the Dai women resulted in them being referred to as the “old teeth” or “blackened teeth” people during the Tang (618-907) and Song (960-1279) Dynasties. This tradition involved chewing betel nuts until ones teeth became completely black. Blackened teeth were considered a modicum of beauty and modesty by the Dai, and from a practical standpoint it appears that the betel nut juice also prevented cavities! A similar practice was carried out by Japanese women during the 16th century for roughly the same reasons so you never know, with fashion becoming ever stranger and dentistry becoming more expensive, we may see a revival of the “old teeth” look in the coming years!

The traditional dress of Dai men resembles that of the women, although it is not as ornate and they don’t wear skirts! They prefer tight-sleeved collarless jackets that are buttoned from the front or the right side, which are accompanied by loose trousers. They are often seen wearing white, black, or blue turbans and, during the winter months, it is not uncommon to see a man with colourful blankets draped over his shoulders. However, like the black-toothed women, the Dai men have an obscure aesthetic tradition that dates back hundreds of years.

When a boy reaches the age of about 11 or 12, he will normally invite a tattoo artist to adorn his torso or limbs with designs of animals, flowers, geometric patterns, or letters of the Dai script. First the pattern will be drawn on the skin using a coloured dye, and is then pricked into the skin using a fine needle. This allows the dye to sink into the skin and, after a period of time known as the “curing period”, the tattoo is permanent.

According to local legend, the Dai people were once nomads who were desperately searching for a suitable homeland. They would move from river to river in search of fish to eat but, one day, they came upon a river guarded by a fierce dragon. The dragon’s eyesight was poor so it would only attack based on colour. In an attempt to deceive the water dragon, the Dai painted their skin in the colours of the dragon himself.

However, as they entered the river to fish, the paint gradually washed off and the dragon, realising they were not kin, fell upon them with renewed rage. Luckily, the Dai managed to escape but were crestfallen that their plan had failed. It was then that a clever shaman figured out how they could make the paint permanent. By applying the paint and then pricking the skin, the colour would sink into the skin itself and the pattern would stay. This is how the Dai practice of tattooing was born and, when it comes to tattoos, the Dai men believe “the more, the better”. I suppose you’d feel the same way if your tattoos were the only thing standing between you and an angry dragon!