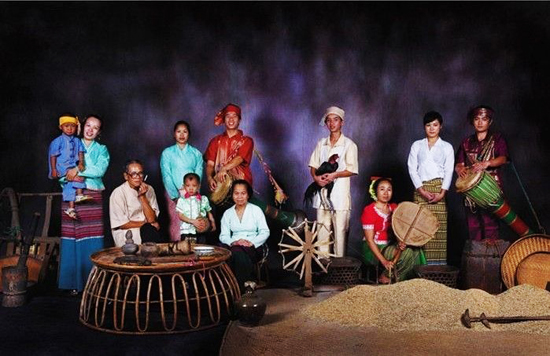 The Dai are one of the happiest and most carefree of all the ethnic minorities in China and this is reflected in their chosen name, which means “freedom” in the Dai language. Just over one million Dai people currently live in China, predominantly concentrated in Yunnan province, but the term Dai can also be applied to communities in Thailand, Laos, Burma, Myanmar and Vietnam. This is because the illustrious ancestors of the Dai people, known as the Bai Yue, Bai Yi, or Bai Ye people, are thought to be shared with the Lao people of Laos, the Shan people of Myanmar and the Thai people of Thailand. Talk about a big family! And if that wasn’t enough, the Zhuang, Dong, Shui, Bouyei, and Li ethnic minorities also identify the Bai Yue as their ancient ancestors. Although we doubt there’s a space large enough for a family reunion, these ethnic groups all share undoubtedly similar features that point towards their common heritage.

According to historical records, the first references to the Dai’s ancestors were made during the Qin (221-206 B.C.) and Han (206 B.C. – 220 A.D.) dynasties. The first Dai prefecture, known as Yizhou Prefecture, was set up in 109 BC by Emperor Wu of the Western Han Dynasty. It took up a large portion of southwestern Yi, which in turn covered parts of modern-day Yunnan, Guizhou and Sichuan. It appears the Dai people lucked out, as the patch of land they were designated was incredibly fertile and benefited from an excellent climate! This encouraged the Dai to become accomplished farmers and they are believed to be the first to have used elephants and oxen to plough the land. They also developed complex irrigation systems to help farm rice more effectively, so next time you’re in China and you’re enjoying a hearty bowl of rice, remember to thank the Dai. And the elephants!

Nowadays the vast majority of the Dai population can be found in Xishuangbanna Dai Autonomous Prefecture and Dehong Dai and Jingpo Autonomous Prefecture, both in Yunnan province. They can be further subdivided into the Dai Neua, which are mainly found in Dehong, and the Dai Lue, which are mainly found in Xishuangbanna. Like many ethnic minorities, their language is incredibly complex and different Dai communities will speak one of some five southwestern Tai languages, known as Tai Lü, Tai Nüa, Tai Dam, Tai Ya, and Tai Hongjin. All of these spoken languages are closely related to those of the Zhuang and Dong ethnic minorities.

In keeping with this level of complexity, they also have an alphabetic writing system that is separate from the character-based Chinese script and can be split into four branches. If you thought learning French at school was hard, imagine trying to learn five different spoken languages and four different ways of writing! Their writing system originates from the Indian alphabet and is classified as a variant of Sanskrit. They use this script to keep a record of their history and preserve their folklore.

The average Dai village is usually made up of about 40 households, with larger villages consisting of nearly 100. They are normally situated close to rivers or streams, as the Dai people revere water, and feature a large banyan tree or sacred forest, where the locals believe the spirits of their ancestors live. Even the smallest of villages will have its own Buddhist temple or pagoda, as the Dai are devout Buddhists. The peacock is also greatly admired as a symbol of beauty, honesty, and peacefulness. Their Peacock Dance has garnered great fame in China for its grace and use of complex arm movements. Just imagine Swan Lake but with a lot more colour!

If you want to experience Dai culture first-hand or simply take part in their delightful Water Splashing Festival, we recommend visiting either Manting Park or the Dai Ethnic Garden in Xishuangbanna. There you can enjoy some of their delectable bamboo fried rice, take part in the water splashing festivities, or simply admire the elegant dress of the Dai women.