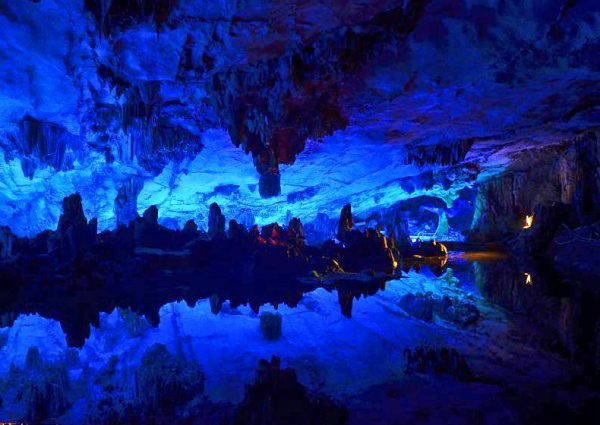 Reed Flute Cave (Ludi Yan) earned its unusual name thanks to the plentiful reeds growing outside of the cave’s entrance that are often used to make flutes or other small wind instruments. The cave is about 5 kilometres northwest of downtown Guilin and the main entrance to the cave is situated on the south side of Guangming Hill or “Bright Light” Hill. Reed Flute Cave is a natural limestone cave that has formed over a period of 180 million years. Although it was only officially opened as a tourist attraction in 1962, it has in fact been a tourist site for over 1,200 years. As a testament to its popularity throughout the years, more than 70 inscriptions have been written in ink on the cave’s walls, some of them dating all the way back to 792 A.D. These inscriptions are evidence that the cave has been a beloved attraction since the Tang Dynasty (618-907).

For many years, the cave remained untouched until, in the 1940s, a group of Chinese refugees fleeing from Japanese troops during World War II came upon the cave and used it as a hiding place. The cave itself is 240 metres long and boasts a glittering array of stalagmites, stalactites, stone columns and bizarre karst formations. All of these fantastically alien shapes have been created by the deposition of calcium carbonate in the water as it trickles through the limestone. When the water hits the floor, it deposits tiny particles of calcium carbonate that eventually grow upwards to form stalagmites. When the water drops from the ceiling of the cave, it leaves behind tiny deposits of calcium carbonate that eventually form stalactites. It is estimated that the stalactites and stalagmites in Reed Flute Cave grow on average about 1 millimetre per year. 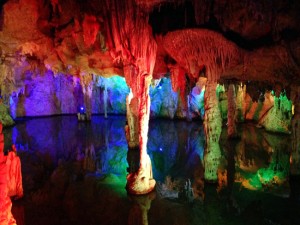 Visitors enter the cave at Bright Light Hill and follow a U-shaped path that eventually leads them to an exit not far from the entrance of the cave. It takes approximately one hour to make your way through the entire cave at a steady pace. We strongly recommend that you wear appropriate shoes and warm clothes in the cave, as the floor of the cave is wet and muddy and, although it may be warm outside, the cave tends to stay very cool. Inside the cave, the interior has been beautifully lit with differently coloured lights. This myriad of colour illuminating and bouncing off of the strange shapes of the rock gives the cave an almost mystical feel, as if you are travelling through a fairy-tale world.

As you travel through the cave, you’ll come across several rock formations that have been given whimsical names based on their appearance, such as the Dragon Pagoda, Mushroom Hill, the Red Curtain and Pines in the Snow. There is even a rock formation that looks just like the Statue of Liberty. Perhaps the most impressive part of the cave is a grotto known as the Crystal Palace, which is large enough to hold just over 1,000 people. In this grotto, there is a stalagmite that appears to be in the shape of a human being. This stalagmite was once supposedly a visiting scholar who came to Reed Flute Cave with the aim of writing a poem that would perfectly capture its majesty. He spent so long in the cave trying to find the right words for his poem that he eventually turned to stone. There are so many beautiful rock formations such as these in Reed Flute Cave that it is now often referred to as “Nature’s Art Palace”.

Unfortunately the cave is so dark that it is very difficult to get any decent photographs within the cave unless you are using specialist photographic equipment. However, at certain stations throughout the cave, such as the Crystal Palace, camera equipment has been set up so that visitors can pay to get their photograph taken near some of the more fantastic rock formations. These photographs, along with the reed flutes which can be purchased at the entrance and exit of the cave, make a wonderful souvenir. At the cave’s exit, a park has been built with many elegant pavilions, crystal clear ponds, wonderfully engraved stone bridges and numerous colourful flowerbeds. It is the ideal place to relax after a long trek through the cave. There are public buses that run between Guilin city and Reed Flute Cave, although they are not very regular so we recommend that you check the bus schedule in advance.