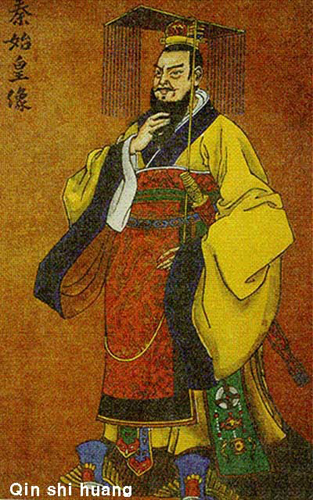 Qin Shi Huang (259-210 B.C.) is a figure who’s met in China with both reverence and disgust. He was the First Emperor of China and the first man to single-handedly unify the country, but he was also a tyrant whose dictatorial reign had him reviled for centuries after his death. He masterminded the construction of the Terracotta Army and ordered the construction of what would eventually be the Great Wall. However, his all-consuming greed decimated the country’s resources and it is thought that, under his reign, the population of China more than halved in size. He was so despised by his own people that he was the target of several unsuccessful assassination attempts, one of which was the inspiration for the martial arts epic Hero starring Jet-Li. Qin Shi Huang’s rise to power and his dynasty, though bloody and brutal, has undoubtedly become the stuff of legends.

There is much controversy surrounding Qin Shi Huang’s birth. He was born in 259 B.C. in the city of Handan and was given the name Ying Zheng. He was the eldest son of the Qin prince Yiren. His mother was the Lady of Zhao, Yiren’s beloved concubine.

Before Ying Zheng’s birth, his father Yiren was supposedly being held hostage by the State of Zhao and was liberated by a wealthy merchant named Lü Buwei. Yiren then ascended the throne as King Zhuangxiang of Qin. According to historian Sima Qian[1], Lü Buwei introduced Yiren to Ying Zhen’s mother, Zhao Ji. However, unbeknownst to Yiren, Zhao Ji had been Lü Buwei’s concubine for some time and was pregnant with his child. It was rumoured that Ying Zheng was in fact the illegitimate son of Lü Buwei. Ying Zheng’s potential illegitimacy was widely believed throughout China at the time and contributed to the negative view that many people had of him. Modern analysis suggests that Sima Qian probably added this rumour to his records to slander Ying Zheng as, according to Confucian principles, merchants like Lü Buwei were among the lowest of the social classes.

After his father’s death in 246 B.C., Ying Zheng ascended the throne at the age of 13. In light of Ying Zheng’s inexperience, Lü Buwei was appointed as regent prime minister. Lü Buwei was worried that, if he continued as prime minister, Ying Zheng would eventually find out about his affair with Zhao Ji, so he made Lao Ai prime minister instead. However, when an attempt by Lao Ai to overthrow Ying Zheng failed, he was executed. Lü Buwei’s involvement in this coup led to his exile and in 235 B.C. he committed suicide. It was then, at the age of 22, that Ying Zheng took complete control of the State of Qin.

Ying Zheng became King of Qin during what is known as the Warring States Period (r. 475-221 B.C.), which followed the Spring and Autumn Period (r. 770-476 B.C.) of the Zhou Dynasty. During the Zhou Dynasty, dukes were appointed to rule over separate fiefdoms. As the Zhou Dynasty began to collapse, these fiefdoms began to develop into separate states. When the Zhou Dynasty finally fell, these former dukes took control of their respective states and each claimed to be the rightful King. This was a period of great political unrest as the Seven Warring States were constantly at war with one another in a desperate bid to try and expand their empires. Only these major seven states survived as the smaller states, lacking the protection of a centralized government, were swiftly annexed. After seizing control of Qin, Ying Zheng began a military campaign to conquer the six other Warring States. 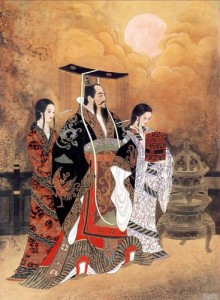 The State of Qin was shielded by mountains, which provided a natural barrier and made it difficult to invade. This gave Ying Zheng a military advantage. Behind these mountains, Ying Zheng built up a large and powerful army. Between 230 B.C. and 222 B.C., Ying Zheng conquered the States of Han, Zhao, Yan, Wei, and Chu. Finally, in 221 B.C., he annexed the State of Qi and completed his domination of the Warring States. For the first time in history, China was unified under one ruler.

Ying Zheng gave himself the regnal name Shi Huangdi. He believed he was greater than the divine Three Sovereigns (Sān Huáng) and the legendary Five Emperors (Wŭ Dì) of Chinese prehistory, so combined their names to create the title Huangdi or “Emperor”. The “Shi” part of his regnal name indicates that he was the first, so his title can be translated to mean “First Emperor”. His intention was that his successors should be named “Second Emperor”, “Third Emperor” and so on. He is now commonly referred to as Qin Shi Huangdi to differentiate him from emperors of other dynasties.

Qin Shi Huang was responsible for unifying China in more ways than just conquering the Warring States. He centralized the government by abolishing the rulers of the previous States and placing the whole country under his rule. He changed the imperial system so that official appointments were based on merit rather than on hereditary right, meaning he chose his own officials.

With the help of his chancellor, Li Si, Qin Shi Huang standardized Chinese units of measurement, such as weights and measures, and also units of currency. He created a standardised currency known as the Ban liang coin, a circular coin that has a square hole in the middle. He created an extensive network of roads and canals that helped link all regions of his empire, enabling people to trade much more easily. These measures helped to unify the country economically. Perhaps his most significant achievement was his regularisation of Chinese script. Under the guidance of Li Si, the seal script of the State of Qin became the standard script for the whole country. This was the first time in history that there had been one language and one system of communication across the whole country.

Yet, even after he had unified China, he was still the target of several assassination attempts, including one in 218 B.C. when he was traveling through the mountains and an unidentified strongman supposedly threw a colossal, metal cone, weighing approximately 97 kilograms (160 lbs.), at his carriage. The vitriol levelled against him was in part due to the many pitfalls of his reign. He banned all other schools of thought besides legalism and eliminated the Hundred Schools of Thought, which included Confucianism and older forms of Buddhism. The ideology behind legalism was that people should obey the laws or be punished accordingly, making it a strict and ruthless philosophy of governance.

In accordance with his attempt to quash these schools of thought, on the advice of Li Si, Qin Shi Huang had almost all of the books written before his Dynasty burned. He spared only books on astrology, agriculture, medicine, divination, and the history of the State of Qin. According to Sima Qian, he also had 460 scholars buried alive, although modern analysis suggests that this was a fabrication used by Confucian scholars to distance themselves from the failed dynasty.

In terms of his architectural achievements, the construction of the Great Wall is often attributed to him. During his reign, in order to protect the northern frontier from the Xiongu people, he masterminded the building of a huge wall to the north that connected the existing state walls and incorporated mountains and cliffs as defensive structures. This was the precursor of the Great Wall. He also built the Lingqu Canal, which was intended to transport supplies to his army. This massive canal is 34 kilometres in length and links the Xiang River and Li River, connecting North China with South China. The Lingqu is considered one of the three great feats of Ancient Chinese engineering, along with the Great Wall and the Sichuan Dujiangyan Irrigation System. However, his greatest legacy is arguably his mausoleum. It contains the Terracotta Army, an army formed of over 6,000 clay figures. Each figure is unique and was based on a real soldier in Qin Shi Huang’s army. His tomb remains unopened to this day.

Qin Shi Huang was notoriously superstitious and was obsessed with trying to find the elixir of life. In his lifetime, he visited Zhifu Island three times in the hopes of finding the Mountain of Immortality (Penglai Mountain). Yet his quest for immortality would eventually prove his undoing. In 211 B.C., Qin Shi Huang was plagued by a dark omen, a meteor that landed in Dongjun. Someone supposedly carved the words “The First Emperor will die and his land will be divided” into the meteor. Qin Shi Huang had all of the people in the vicinity executed and had the meteor burned and pulverized.

A year later, the Emperor died at his palace in Shangqiu prefecture. His death was caused by ingesting mercury pills, which ironically had been prescribed to him by alchemists to make him immortal. He was succeeded by his son, Huhai, but Huhai was not as capable a ruler as his father. Revolts soon broke out across the country and, only four years after the First Emperor’s death, the Qin Dynasty collapsed. Perhaps the meteor’s prophecy was true and Qin Shi Huang was right to have been so superstitious after all.

[1] Sima Qian (145–90 BCE): A Chinese historian whose most noted work was called Shiji or Records of the Grand Historian