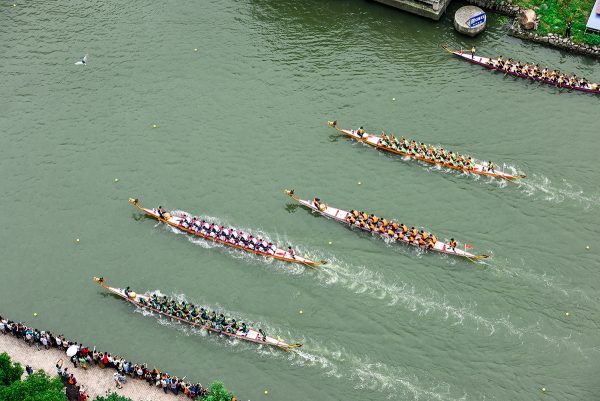 The figures of powerful men furiously driving their dragon-headed boats through choppy waters, the crowds raucously cheering on the banks, the people ceremoniously throwing rice into the river; these iconic images of the Dragon Boat Festival have become as famous throughout the world as the loosing of the lanterns and the dragon dance during the Chinese New Year. Dragon boat races now take place across the globe, from America through to Holland, but few spectators know the tragic history behind them.

The Dragon Boat Festival, known in China as the Duanwu Festival, is over 2,000 years old and was made an Intangible Cultural Heritage by UNESCO in 2009. It takes place on the 5th day of the 5th month according to the Chinese lunar calendar, so it is sometimes referred to as the Double Fifth Festival. This means that, according to our calendar, the dates for the festival change every year. If you’re planning a trip to China, be sure to check the festival dates for that year or you might miss it. It’s now a statutory public holiday in China, so be prepared for crowds!

The festival usually takes place on or around the summer solstice; the longest day of the year. The force of yang and the sun are considered to be at their strongest around this time. Since the sun and the Chinese dragon were both traditionally associated with masculine energy, the dragon naturally became connected to this festival. Chinese people celebrate mainly by hosting dragon boat races, eating zongzi and drinking realgar wine. However, the lively atmosphere of the festival can be misleading, as its origins are actually rather dark.

Most Chinese people regard the festival as a commemoration to the poet Qu Yuan (340–278 B.C.). During the Warring States Period (c. 476-221 B.C.), Qu Yuan was a loyal advisor to the king of the State of Chu. He was one of the few advisors who opposed the alliance with the State of Qin, as he was worried that his homeland would be subsumed by the Qin Empire. Soon other advisors, who supported the alliance and disliked Qu Yuan, conspired against him and he was exiled. He wrote much of his poetry in this state of exile.

In 278 B.C., the Chu capital of Yingdu fell to the Qin army. Overcome by his intense grief, Qu Yuan penned his final poem, “Embracing the Sand”, and drowned himself in the Miluo River. Local fishermen jumped in their boats and rushed down the river in an attempt to find him, but to no avail. Out of respect, locals threw packets of rice into the water to distract the fish so they would not eat his body. In one variation of the story, a local shaman threw realgar into the river in order to intoxicate a water dragon, which the fishermen promptly killed. During the festival, the dragon boat races imitate the fishermen rushing to find Qu Yuan’s body, the zongzi represent the rice packets thrown into the river, and the realgar wine symbolises the shaman’s use of realgar. Thus the celebrations are intended to pay tribute to Qu Yuan’s sacrifice.

In some parts of China people still attribute the festival to the scholar Wu Zixu. Wu Zixu was an advisor to King Fuchai of the State of Wu but tragically, like Qu Yuan, his advice went ignored. The king forced him to commit suicide and had his body thrown into the river on the fifth day of the fifth month, which some believe is why the festival is celebrated on this date. In places such as Suzhou near Shanghai, which is believed to have been part of the State of Wu, he is commemorated alongside Qu Yuan.

Some researchers believe that the stories of Qu Yuan and Wu Zixu were superimposed on to a pre-existing holiday. It is believed that Confucian scholars encouraged the promotion of these stories in order to strengthen their authority as a school of thought during a time when other belief systems were gaining influence in China. This belief is substantiated by historian Sima Qian[1], who praises both Qu Yuan and Wu Zixu but makes no mention of their connection to the festival. Since many of the festival customs focus on the avoidance and prevention of disease, researchers believe the original festival may have originated from a desire to protect the community against infectious diseases that were common during the mid-summer months.

The three main activities are the racing of dragon boats, the eating of zongzi, and the drinking of realgar wine. Zongzi are packets of glutinous rice wrapped in bamboo leaves that are filled with either savoury or sweet ingredients. The making of zongzi is a family activity and each family will normally have their own recipe and cooking method for this tasty treat. Realgar wine is made from Chinese cereal wine that has been laced with powdered realgar (a mineral made from arsenic and sulphur). Since alcohol is associated with yin, this wine will supposedly help dispel the force of yang during the summer months and thus protect the drinker from infectious diseases. That being said, it won’t protect you from getting drunk! Only adults will drink the wine; children will have the word “king” (王) drawn on their forehead or chest with the realgar slurry or will wear amulets containing realgar.

Dragon boats are so named because the fore of the boat is designed to look like a dragon’s head and the rear is carved to look like its tail. These elaborately decorated boats are truly spectacular, both resting on land and gliding through the water. During the race, a team of people will work the oars whilst one person at the front will beat a drum to keep time. The winning team will supposedly bring good luck and a good harvest to their village in the following year. The best places to see the magnificent dragon boat race are Hangzhou in Zhejiang province, Yueyang or Fenghuang Ancient Town in Hunan province, Kaili in Guizhou province, and Hong Kong.

Other, less common activities during the festival include hanging up icons of Zhong Kui (an immortal guardian figure), hanging Chinese mugwort and calamus root from windows and doors to deter mosquitoes and other insects, taking long walks, wearing perfumed incense pouches designed to ward off evil spirits, and the “making the egg stand” game. In this game, if you manage to make a raw egg stand directly upright at exactly 12:00 noon on the day of the festival, you will have good luck for the next year. If you don’t, you’ll just have raw egg all over your hands!

Several regions practise their own unique customs during the festival. For example, in Beijing all food stores will sell an item known as the “Five-Poison Cake”. This is a rose-flavoured pie with images of the five most poisonous creatures (scorpions, frogs, spiders, centipedes, and snakes) imprinted on it. Don’t worry; it’s designed to protect you from these creatures, not to poison you! Similarly, in Linqing county of Shandong province parents will make yellow cloth shoes for their children which have the five most poisonous insects painted on them. This is designed to protect the child from these insects, perhaps by giving the shoes enhanced squishing power!

[1] Sima Qian (145–90 B.C.): A famous Chinese historian whose most noted work was called Shiji or Records of the Grand Historian