In Dong culture, courtship traditionally takes place in three stages. The first stage, known as the early meeting phase, is when the man and the woman will sing songs and recite poems to one another as part of a group. The second stage, known as the deepening love phase, is when the man and woman single one another out so their interaction is on a one-to-one basis and the songs are more spontaneous. The final phase, known as the exchange of a token phase, is when the man offers the women a token of his affection and the woman is expected to make excuses to test the persistence of her suitor. This token is usually a small gift that has little monetary value but it is incredibly symbolically important, as it is the Dong equivalent of offering the woman an engagement ring. 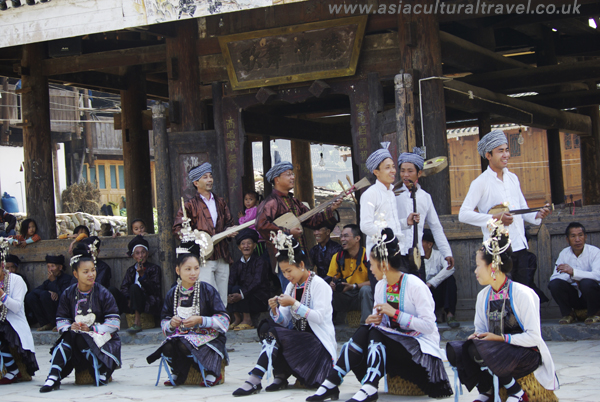 Dong weddings normally last three days and begin in the bride’s family home. After the ceremony in the bride’s home, the bride is transported to the groom’s home, where the groom’s family will host an afternoon reception and an all-night feast. The following day, the guests take part in the “block the horse” ceremony, where the hosts block the village gate whilst singing songs. In Liping region, traditionally the bride continues to live at her parents’ home until she gives birth to her first child. Thereafter she will live with her husband permanently. In some Dong communities, the bride will living with her family after the wedding for a couple of years, since many Dong women get married when they are still very young. The family’s silver jewellery will usually be passed onto the bride by the mother after she is married.