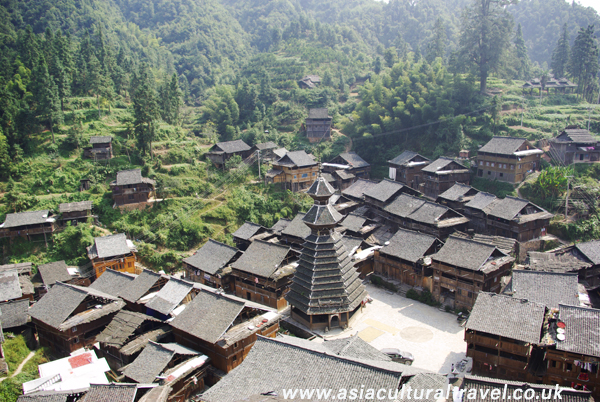 The Drum Towers that loom over every Dong village look like giant cedar trees winding their way to the sky. Drum Towers are a triumph of Dong architecture and are deeply culturally significant to the Dong ethnic minority. They are the place where the elders meet, socialise and, at one point in history, even passed judgement. They are an important social hub in any Dong community and are thus the perfect place to experience authentic Dong culture. There is a Drum Tower in every Dong village and, though they all bear basic similarities, no two towers are ever exactly the same.

There are two different types of Drum Tower: single-pillar towers and multi-pillar towers. As the name suggests, single-pillar towers are braced by only one pillar. They are the less popular of the two types. Multi-pillar towers are braced by four main pillars and 12 smaller pillars, which are believed to represent the four seasons and the 12 months of the year. The four central pillars are sometimes referred to as the “Golden Pillars”. Like the Wind-Rain bridges, the Drum Towers are built without using any nails and instead rely on groove joints, which hold the beams and columns of the tower together perfectly. Most Drum Towers will have a square base but the tower itself will usually be hexagonal or octagonal in shape. The storeys of the tower get wider as they go from top to bottom, giving the tower a tapered appearance. Every Drum Tower will have an odd number of storeys, as the Dong people believe this is a symbol of good fortune. 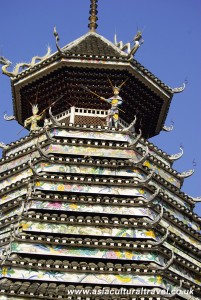 In accordance with the Dong people’s worship of trees, the outline of the Drum Tower is supposed to look like a large tree, specifically a cedar tree. The shape of the tower is supposed to represent the legendary Cedar King from Dong folklore. The tower’s interior and exterior will be lavishly decorated with carvings and paintings of animals, famous historical figures, flowers and tableaus of legendary stories, festivals and daily life. The first storey is usually the most elaborately decorated. In every village, the local clan will have built their own Drum Tower. The size of the tower and the artistic beauty of its decoration indicate the status of the clan who built it, so a large and extravagantly decorated Drum Tower is a sign of a wealthy and powerful Dong community.

Inside the Drum Tower there are benches between the four main pillars. These benches encircle what is called the “fire pond”, which is a fire pit that is kept lit throughout most of the year. It is believed that one of the functions of this “fire pond” is to dry out the inside of the Drum Tower so the wood does not rot, as Guizhou’s climate is notoriously damp and rainy. A large leather drum hangs down from the top of the tower, which is why they are called “Drum Towers”. The drum is beaten whenever something of import happens within the village, although nowadays most towers do not have working drums.

Historically the Drum Tower has always had an important social function within any Dong community. In the past, the council of elders in a Dong village would gather in the tower whenever someone from the village had violated one of the village rules. There they would confer and decide upon a suitable punishment for that individual. Once they had reached a decision, the elders would beat the drum and the villagers would gather to hear the verdict. This custom is no longer practised, although some small disputes may still be handled by the council of elders within the Drum Tower. Nowadays it is a place where villagers can gather to entertain each other by singing, playing instruments, dancing or simply meeting and socialising. The tower is also still the main venue for important festivals.

The number of Drum Towers in each village depends on how many clans or large families live within the village. Each large family or clan will erect their own Drum Tower as a monument to their family. Small Dong villages will only have one Drum Tower because they usually only house one clan and all of the villagers will have the same family name. Larger Dong villages, such as Zhaoxing, will have more than one Drum Tower because the village is home to a number of different clans, all with different family names.

The Zengchong Drum Tower is regarded as one of the archetypal Dong-style Drum Towers and it is the largest Drum Tower in Guizhou province. It is located in Zengchong Village, about 50 kilometres northwest of Jingxian County. It was built in 1675, during the Qing Dynasty (1644-1911), and it covers an area of over 100 square metres. It is a five-storey octagonal shaped tower, stretching 20 metres from top to bottom, with 13 eaves and a pyramidal roof. The “fire pond” within the tower is nearly 2 metres in diameter. There are three doors into the tower, on the south, north, and west sides respectively, and there is a horizontal tablet on the ground floor. This tablet was carved in 1830 and has four Chinese characters inscribed upon it, which read: “Ten-Thousand-Li[1] Soft Breeze”. The leather drum within the tower is still intact and in use today.

Drum Towers are often considered holy shrines by the local people and so, if you visit Zengchong village, be sure to note what is hanging from the village gate. If there is a thatch design hanging from the gate, this means religious celebrations are taking place and only residents are permitted entrance to the Drum Tower.

Unfortunately, at the moment there is no direct transport to Zengchong village. In order to get to the village, you first need to take the bus from Kaili to Rongjiang, which takes about 4 hours. After that, you must take another bus from Rongjiang to Congjiang and get off at Tingdong. From Tingdong, the only way to get to Zengchong village is to flag down a tractor that is heading that way, as there will be no taxis or public buses in Tingdong. There are private hostels in Zengchong village that are very cheap and near to the Drum Tower, although they may not be equipped with all modern amenities. Alternatively, you can visit the Drum Towers in the Dong villages of Sanbao, Yintan or Xiaohuang, which are all much easier to get to.

Join a tour with us to explore more about Drum Towers: Explore the Culture of Ethnic Minorities in Guizhou