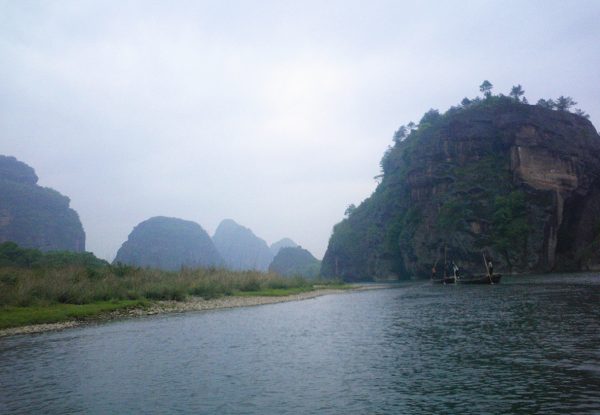 Jiangxi province has long been renowned for the blue-and-white porcelain that has been produced in the region for over 1,800 years. You could almost say that this province puts the china in China! Yet it has much more to offer than just fine teacups and saucers. Bounded by the Huaiyu Mountains in the northeast, the Wuyi Mountains in the east, the Jiulian and Dayu ranges to the south, and innumerable mountain ranges to the west and north, Jiangxi has long been celebrated as a haven of great natural beauty. Lake Poyang, the largest freshwater lake in China, shimmers at its southern tip, while the Gan River winds its way gracefully through the province from south to north.

Surrounded by mountain ranges as it is, you’d expect Jiangxi to be reasonably isolated from its neighbouring provinces. However, as if by design, these mountains rise in disconnected masses and contain numerous corridors, which allow access to the nearby provinces of Hunan, Hubei, Anhui, Zhejiang, Fujian, and Guangdong. Historically, this meant that Jiangxi played a crucial role as the connecting province between the maritime trading hub of Guangdong in the south and the Grand Canal[1] in the north. Armies, traders, monks, and migrants; all invariably passed through Jiangxi on their way north or south.

Throughout history, its importance as a cultural and commercial hub meant that Jiangxi gave birth to numerous celebrated talents, including the great Jin Dynasty (265-420) poet Tao Qian and the Song Dynasty (960-1279) philosopher Zhu Xi. It was Zhu Xi who pioneered the development of Neo-Confucianism, arguably one of the most influential schools of thought in Chinese history. The White Deer Grotto Academy where he once taught is still a popular tourist attraction in the province. With such a strong tradition of Confucian principles, it may come as quite a surprise that Jiangxi was also notorious for its peasant rebellions!

The provincial capital of Nanchang was even the site of the Nanchang Uprising in 1927, the first major clash between the Chinese Communist Party and the Kuomintang[2]. The Communists used the Ruijin area in southeastern Jiangxi as their first major revolutionary base, from which they began their famous Long March in October of 1934. Thus the province has long been a hot spot for Red Tourism, with numerous attractions catering to those fascinated by China’s modern history.

In terms of climate, Jiangxi’s southerly location means that it’s largely subtropical, with long humid summers and short damp winters. Winter temperatures average at a mild 3 to 9 °C (37 to 48 °F), while the sweltering summer heat can reach elevations of 27 to 30 °C (81 to 86 °F). This climate, coupled with the mountainous terrain and marshy areas, makes Jiangxi the ideal home for numerous animal species, including the endangered Chinese giant salamander, the South China tiger[3], and the Siberian crane. Nearly 3,000 white cranes migrate to Lake Poyang every winter, creating a scene that looks as if it was taken straight from a watercolour painting!

Other areas of exceptional natural beauty include Lushan National Park and Mount Sanqingshan National Park, which were both designated UNESCO World Heritage Sites in 1996 and 2008 respectively. From the Tengwang Pavilion in Nanchang to the Donglin Temple near Jiujiang, you’ll be spoilt for choice among the more than 2,400 scenic sites dotted throughout the province. Yet the highlight of Jiangxi has always been its unparalleled handicrafts.

During the Song Dynasty, Emperor Zhenzong decreed that the town of Fouliang should be made the country’s centre for porcelain production, and renamed it Jingdezhen. For over a thousand years, this quaint town has supplied the Chinese people with porcelain wares of impeccable quality, ranging from everyday items to artistic works of spectacular beauty. It is such an ingrained part of their culture that most modern-day residents of Jingdezhen are still involved in the porcelain industry. The nearby city of Jiujiang is famous for its yunwu or “cloud-and-fog” tea, which is grown on Mount Lu. So, if you’re traveling in Jiangxi, be sure to treat yourself to a cup of yunwu tea in a Jingdezhen teacup!

[3] South China tigers have not been sighted in the wild for more than 25 years, so they are classified as functionally extinct.