Liaoning is often regarded as something of an “outsider” when compared to other provinces in China. Although nowadays its population is dominated by the Han Chinese, this region frequently found itself under non-Han rule throughout the course of history. Whether it was the Khitans of the Liao Dynasty (907–1125), the Jurchens of the Jin Dynasty (1115–1234), or the Mongolians of the Mongol Empire, Liaoning was passed around between different ethnic groups faster than a hot potato! It even formed part of several Korean kingdoms, such as Gojoseon, Goguryeo, and Balhae. In particular, it played a focal role as the main political centre from which the Manchu people of the Qing Dynasty (1644-1912) conquered the Ming Dynasty (1368-1644).

On the collapse of the Qing Dynasty, Liaoning soon found itself embroiled in yet another power struggle! During the early 20th century, it was occupied by Russia and Japan, who both contributed to the development of heavy industry in the region. Nowadays this mingling of numerous ethnic influences can be seen in Liaoning’s cosmopolitan nature, which sets it apart from many other provinces in China. From the ruins of the Goguryeo imperial capital on Wunü Mountain to the Japanese- and Russian-style architecture in the port city of Dalian, the effect of foreign cultures is clearly palpable throughout the province.

The province itself is located in a northeastern region of China that was formerly known as Manchuria. Since it is bounded by North Korea to the east, the Yellow Sea to the south, and Inner Mongolia to the northwest, it is sometimes referred to as the “Golden Triangle” because of its strategic trading location. The Liao River, which flows through the centre of the province, is where the name “Liaoning” is derived. When literally translated, the name means “Peace on the Liao”, which hints at the province’s turbulent past. Geographically, it can be divided into four main regions: the central plains, the Liaodong Peninsula, the western highlands, and the eastern mountainous zone.

Its varied topography means that Liaoning’s climate suffers from extremes, which depend on the proximity to the coast. On average, the temperature oscillates from a comfortable 23 °C (74 °F) to 25 °C (77 °F) in summer, but drops to a chilly −5 °C (23 °F) to −12 °C (10 °F) in winter. Summer rainfall is usually torrential, but there is a marked lack of rain in spring. Its mild weather makes it the ideal rest-stop for migrating birds, which annually flock to a nature reserve on Mount Laotie during the autumn. Thousands of birds from over 200 different species take refuge here every year, making it a haven for bird-watching.

In fact, Liaoning boasts a plethora of gorgeous natural attractions, including the Benxi Water Cave National Park and the Qianshan National Park. The Benxi Water Cave is the largest water cave in Asia and contains a 3-kilometre-long (1.8 mi) underground river, which is supposedly so clear that the riverbed is always visible. Visitors can take a scenic boat ride along the river and admire the many strange rock formations within the cave, or spend the day exploring the numerous other areas in the national park, such as misty Mount Tiecha and the lush Tanggou Valley.

Similarly, Qianshan National Park is centred on the celebrated Qianshan Mountains. The name “Qianshan”, which literally means “A Thousand Mountains”, is an abbreviation of the original name “A Thousand Lotus Flower Mountains” and is an allusion to a famous legend, which states that the mountains were formed when a goddess dropped her beautiful lotus flower embroidery to earth. Alongside the mountain range, the park is littered with stunning Buddhist and Taoist temples, monasteries, and nunneries that are just waiting to be explored.

Yet the crowning jewels of the province are undoubtedly its three UNESCO World Heritage Sites: the Mukden Palace in Shenyang, the three imperial tombs near Shenyang, and the ruins of the ancient Goguryeo capital on Wunü Mountain. In addition, the easternmost section of the Great Wall cuts across the southwestern corner of the province. 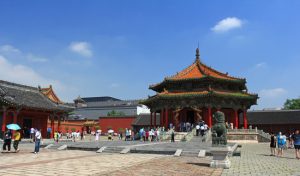 The Mukden Palace was built for the Qing Dynasty emperors before they conquered the rest of China, and was designed to be a smaller version of the Forbidden City. It provides a fascinating insight into palace architecture at the time and exhibits Han Chinese, Manchu, and Tibetan architectural features, making it relatively unique among imperial buildings in China. It has now been converted into a museum, where visitors can delve into the history of the Manchu emperors. In the same vein, the three imperial tombs near Shenyang were all dedicated to different Manchu emperors and are known as the Zhaoling Tomb, the Fuling Tomb, and the Yongling Tomb respectively. With such a wealth of historical sites on offer, Liaoning may be the cultural “outsider”, but it certainly isn’t an underdog!