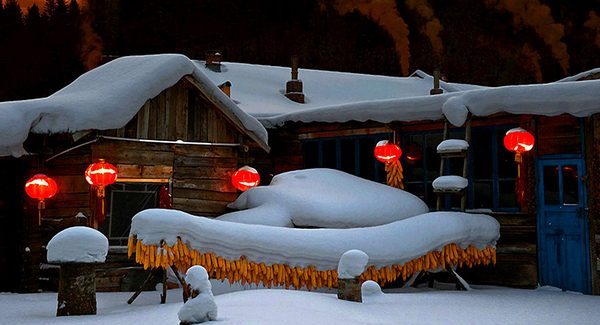 Get ready to feel like you’re on top of the world! Or at least on top of China. Resting at the tip of Heilongjiang province, Mohe is the northernmost county in China. Its most celebrated attraction is the almost perpetually frosty Beiji or “Northernmost” Village, which lies close to the border with Russia and represents the country’s northernmost settlement. Every year, tourists flock to the village to peer across the Amur River at the snowy climes of Russia’s Siberian forests or to take a photo in front of a stone monument that marks China’s most northerly point. Those that are lucky enough to arrive at just the right time are treated to a rare glimpse of the aurora borealis, or Northern Lights.

Mohe may sound like a winter wonderland, but it is important to note that it can be somewhat inhospitable. Its vast forests are home to bears and wolves, while its subarctic climate means winters can last for up to seven months and temperatures can regularly drop to below -30°C (-22°F)! That being said, these primitive forests are undeniably picturesque and are rich with rare animal species like sika deer, wild boar, snow hares, red deer, pheasants, sables, and reindeer.

National parks such as the Huzhong National Nature Reserve have become popular retreats for hunting, hiking, and fishing. Many of the unusual plant species found there are used to brew wine and make herbal remedies according to traditional Chinese medicine. So, even if you get the flu in this chilly place, you’ll never be too far away from a cure!

While the village of Beiji is undoubtedly the region’s star attraction, the town of Mohe is not without its charms. In 1987, the town was tragically destroyed by fire and was entirely rebuilt in a Russian architectural style. From colourful cupolas and arched windows to decorative golden lettering, it looks more like a scene from a Tolstoy novel than a traditional Chinese folktale. These European-style buildings, coupled with the dense woodlands that envelop the town, evoke the atmosphere of a dark fairy-tale. Russia’s influence on the town is still palpable not only in its architecture but also in its tourist shops, which continue to sell Russian nesting dolls and chocolate.

During the close of the 19th century, the region also benefited from a brief gold rush. Statues of gold-panners in Mohe Town act as a testament to the droves of speculators from Russia, Japan, and Korea who flocked here in the hopes of making their fortune. Mohe’s very own Yellow Brick Road, known as the “Golden Path”, was once a famous gold mining region and remains a popular tourist draw to this day. Who knows; during your trip, you may just strike it rich!