As one of the Eight Great Culinary Traditions of Chinese Cooking, it should come as no surprise that Shandong province offers a plethora of snacks that are as unique as they are delicious. Shandong cuisine is renowned for its liberal use of pungent ingredients such as garlic, onion, and spring onions, its saltiness, its crispy textures, and its locally produced vinegar, which is much darker and more complex than other Chinese vinegars. Seafood is a popular ingredient in this coastal province, but Shandong chefs are so skilled that they are able to bring out the natural flavour and essence of whatever they cook, from delicate river fish to simple vegetables. In short, you’ll never be too far away from a satisfying snack in this province! 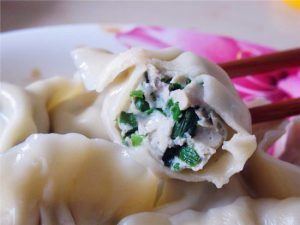 When it comes to Chinese cuisine, dumplings are always a fan favourite. Sumptuously soft dumpling skins, moist morsels of pork mince, mouth-wateringly aromatic dipping sauce; what’s not to love? Shandong-style dumplings utilise a dumpling skin fashioned from a simple mixture of rice flour and water, with a hearty filling made from pork mince, dried shrimp, soy sauce, salt, Shaoxing rice wine, sesame oil, shredded ginger, and chopped spring onions. In the coastal Jiaodong region, a special version of these dumplings is made using a species of fish known as a Spanish mackerel as its main ingredient.

A liberal dollop of filling is ladled into each dumpling skin before they are sealed and placed in a large pot of boiling water. Cold water must be periodically added to the pot and stirred in order to make sure none of the dumplings burst. When the dumplings are thoroughly cooked, they are delicately scooped out of the water and served with a fragrant dipping sauce made from soy sauce, rice vinegar, sesame oil, and chilli paste. Each dumpling is packed full of flavour, and the dipping sauce adds a pleasantly sour tang that glances off of the tongue. 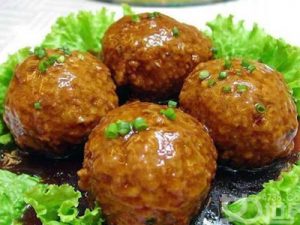 While many of us associate meatballs with Italy, you’ll be surprised to hear that they actually originated from Shandong province! The recipe for Four-Joy Meatballs is one of the oldest in the world, dating all the way back to the Qin Dynasty (221-206 BC). Very few dishes can match its pedigree, and still fewer can compete with its simple but hearty flavour. The meatballs are rolled from a mixture of pork mince, diced onions, ginger, lotus root, Shaoxing rice wine, pepper, soy sauce, eggs, and starch. They are then fried before being steamed with more soy sauce and Shaoxing rice wine until they are perfectly cooked.

The result is a bite-sized snack that is crispy on the outside but irresistibly moist on the inside. The crunchy texture of the lotus root is complemented by the softness of the pork mince, while the umami flavours of the meat intermingle beautifully with the aromatic ginger. The round shape of the meatballs is said to symbolise gathering and union in Chinese culture, and the meatballs are always served in fours to signify the Four Joys of Life traditionally marked by family gatherings: Courtship, Marriage, Child-Rearing, and Aging. 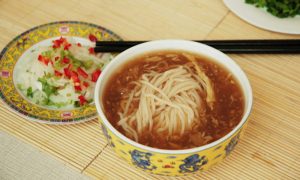 Penglai Noodles are a famous traditional snack hailing from the coastal city of Penglai. The noodles are made and stretched by hand in order to ensure that they’re thin but retain their toughness and durability. According to the locals, these noodles are so thin that they simply melt in your mouth without you having to chew. So, if you’re feeling particularly lazy, this might be just the snack for you! The noodles are first boiled before being served in a light broth made from red snapper. They are often eaten for breakfast, because there’s nothing quite like a steamy bowl of noodle soup to ward off the brisk sea breeze.