The Hui are a deeply religious people and strictly follow the Islamic faith, meaning they live a puritanical lifestyle. They are forbidden from smoking, drinking alcohol, and gambling, and young people are not permitted to sit alongside elders. They rarely like to joke and their dress code is reasonably strict, since it is considered inappropriate to bare your arms or any part of your chest in public. The Hui people may not be the ethnic minority you’d want to party with, but their fascinating mixture of Eastern and Central Asian culture is a wonder to observe.

They strictly follow Islamic dietary laws and are forbidden to eat the meat of pigs, dogs, horses, donkeys, and mules as well as the blood of any animal. They have a particular aversion to pork as, according to the Quran, pigs are the only animals that can never be properly cleaned. That being said, I don’t think the pigs are going to complain about this arrangement! They are not permitted to eat the meat of any animal that has died naturally or has been slaughtered by anyone other than an imam or approved butcher. It is also unacceptable to make jokes about food or use the forbidden foods in a metaphor. For example, the terms “blood red” or “as filthy as a pig” would be considered highly inappropriate.

Cleanliness is one of their main concerns and so they always wash their hands before and after any meal. Before attending religious services, they will take part in either a “minor cleaning” or a “major cleaning”. A minor cleaning simply involves washing the face, mouth, nose, hands, and feet, while a major cleaning entails a thorough bathing of the whole body. So, if you thought your sister took a long time in the shower, be thankful you aren’t sharing your bathroom with a Hui family!

They are very particular about their drinking water so people should never water their livestock or wash themselves or their clothes near a water source. Before heading to a well or spring to collect water, one must wash their hands thoroughly and any remaining water in a container must never be poured back into the source.

When a person dies, their body must be thoroughly cleaned with water and then wrapped in a white cloth. They are then buried promptly and without a coffin in the presence of an imam, who acts as the presider. The Hui people do not wail during funerals, as this is seen to be a sign of hatred for the deceased. 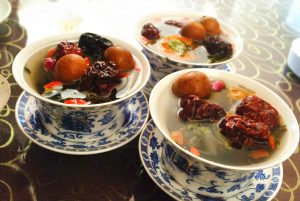 When a Hui family receives visitors, they will always welcome them with tea, fruits, and homemade cakes. They have a rich tea drinking culture and use a three-part tea cup made up of a saucer, a cup with no handle, and a cover, so be careful how you hold it or you may end up with a three-part mess! The host will always prepare the tea and, if there are several guests, they will serve it according to age and status. For example, the most honourable or eldest guest should be served first.

Traditionally, when longans are in season, they will add three fresh longans to the cup with their skins still on. The tea leaves are placed on top of the longans and then boiling water is added. Out of season, they will use dried longans or longan paste. The cup can be refilled with boiling water many times and so many cups of tea can be had from just a few ingredients! The tea leaves used can vary, as each family will have a preference for which type of tea they like.

Above all else, you must never set aside a cup of tea that has been offered to you without trying it first. If you start to eat the fruit, this signifies to your host that you do not want any more tea. It also lets them know you’re hungry, so you may get a cheeky piece of cake out of it too!