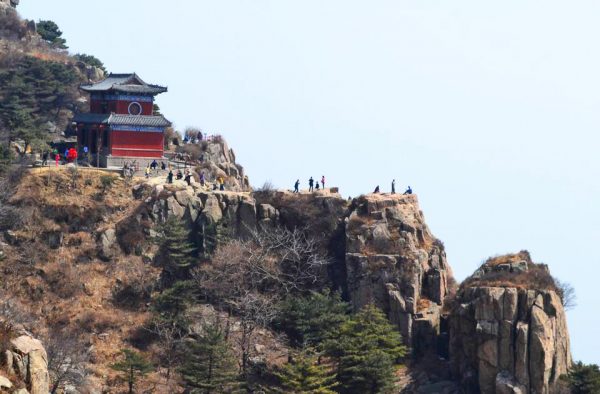 Through misty climes and dense forests the emperors of old would navigate Mount Tai, making the harrowing climb in order to offer sacrifices to the gods. For nearly 3,000 years, it has been a hallowed and sacred place. As the Eastern Mountain of China’s Five Great Mountains, it is often regarded as the foremost of the five. East was believed to be the holiest point since it was the direction from which the sun and the moon would rise, leading it to be associated with birth and renewal. There is even an old Chinese proverb which states: “If Mount Tai is stable, so is the entire country”. While the mountain range’s natural beauty is undeniable, its cultural importance is immeasurable. As early as 1987, it was designated a UNESCO World Heritage Site.

Archaeological evidence from the nearby Dawenkou site indicates that the area was settled and may have been a place of worship as early as the Neolithic Period (c. 8500-2100 BC). By the Shang Dynasty (c. 1600-1046 BC), it was firmly believed to be the home of powerful spirits that could influence the weather, the harvest, and the prosperity of any hopeful dynasty. However, it wasn’t until the Zhou Dynasty (c. 1045-256 BC) that it became the site of highly ritualised ceremonies, during which feudal lords would make sacrifices of food and decorative jade items. Many of these sacrifices would be buried on the mountain, so be sure to keep your eye out for any precious artefacts whilst you’re hiking!

These rituals reached a peak during the Qin Dynasty (221-206 BC), when Qin Shi Huang conquered the warring states and became the First Emperor of a unified China. In 219 BC, he held a ceremony on the mountain’s summit where he proclaimed the unity of his empire. He paid tribute to Mount Tai using an imperial rite known as the Fengshan sacrifices. The “feng” or “heaven” part of the rite would take place on the summit, while the “shan” or “earth” portion would be made at the base. In this way, the emperor paid homage to both heaven and earth in what was considered one of the most important imperial rituals in history. At the end of the ceremony, an inscription would be carved marking the event and the supposed attainment of the “great peace”.

By the Han Dynasty (206 BC–220 AD), Mount Tai was so highly regarded that it was believed to be the place where the souls of the deceased returned for judgement. Yet, in spite of the mountain’s significance, the Fengshan ritual was carried out at very rare intervals. From the Han Dynasty to the Tang Dynasty (618-907), it was only performed on seven separate occasions. After all, mountain climbing may seem hard now, but imagine trying to do it over a thousand years before the invention of hiking boots! Emperors would have to climb a flight of 6,660 steps, which winds its way passed fourteen archways and four pavilions, all decked out in traditional Chinese grandeur and seamlessly incorporated into the natural landscape. The summit itself is known as Jade Emperor Peak and is a breath-taking 1,545 metres (5,069 ft.) tall.

As time went on, Mount Tai’s holiness manifested not only in the imperial inscriptions, but also in a collection of 1,800 stone tablets and 22 temples that can be found throughout the mountain range today. Most famous of these is the Dai Temple at the southern foot of the mountain, which is dedicated to the God of Mount Tai and was originally built during the Qin Dynasty. Its architecture is largely considered to be a prototype of the imperial palace style and its design greatly influenced the construction of other major palace structures in China, such as the Forbidden City in Beijing and the Confucius Temple in Qufu.

The temple itself is made up of five major halls and numerous satellite buildings. Its star attraction is a Taoist painting known as “The God of Mount Tai Making a Journey”, which was completed in 1009 and is widely regarded as a masterpiece of traditional Chinese art. This epic mural is over 3 metres (10 ft.) high and 62 metres (203 ft.) long, extending across the eastern, western, and northern walls of the Palace of Heavenly Blessings. This makes it roughly the same height as an African elephant and approximately 15 times the length of an anaconda!

While the God of Mount Tai was arguably the mountain’s central spiritual figure in early Chinese history, he was swiftly overtaken in popularity during the Ming Dynasty (1368-1644) by his daughter, the Lady of Mount Tai. She is often known by her alternate name of Bixia Yunjun or “Goddess of the Colourful Clouds” and the Azure Cloud Temple was erected in her honour during the Song Dynasty (960-1279).

Both of these temple complexes boast a myriad of ancient trees, which attest to the intermingling of man-made and natural elements on Mount Tai. In particular, there is one pagoda tree that is approximately 1,300 years old, and six cypresses that are over 2,000 years of age! With 72 caves, 130 streams, 72 springs, and a staggering 64 waterfalls, Mount Tai is a paradise for nature lovers. After spending a day hiking up its verdant slopes, you’ll understand why ancient people believed it was blessed by the gods!