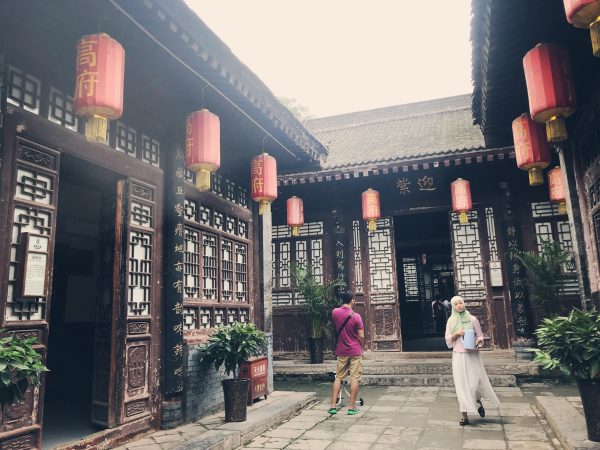 With a history stretching back over 400 years, the Gao Family Mansion is the ideal place to experience what ancient life would have been like in the rapidly expanding metropolis of Xi’an. Its entrance is an unassuming gate on the side of Beiyuanmen Street in the city’s bustling Muslim Quarter and it offers a slice of tranquillity amongst the lively chaos of this popular dining area. This venerable mansion was originally established during the Ming Dynasty (1368-1644) and served as the former residence of a scholar-official named Gao Yuesong. During his illustrious career, Gao Yuesong achieved the second highest mark in the imperial examination and was awarded with this mansion by the reigning Chongzhen Emperor for his loyal service as an imperial official. His story might be worth mentioning next time you talk to your boss about Christmas bonuses!

Gao Yuesong’s mansion was often a hive of activity, as he regularly hosted events with prominent writers, thinkers, scholars, and performers. Unfortunately, he wasn’t able to enjoy his luxurious home for long, as he tragically died at the age of 31. His family, however, continued to live in the mansion for seven generations and many of his descendants went on to have successful careers as officials within the imperial government.

The mansion itself sprawls over an area of over 2,500 square metres (26,910 sq. ft.) and is made up of 86 rooms, 56 of which are currently open to the public. The entire complex is separated into two courts, the north court and the south court, which in turn each contain four small courtyards. Wandering through this labyrinthine complex, visitors will be met with rooms lavishly decorated with period furnishings and walls beautifully bedecked with traditional Chinese paintings. Alongside being a popular tourist attraction, the Gao Family Mansion serves as the offices for four different organisations, including the Xi’an Chinese Painting Academy.

Nowadays, the Gao Family Mansion acts as a beacon of ancient culture in the city of Xi’an. Every day, performances of traditional Chinese opera and Shadow Puppetry take place on its main stage. Shadow Puppetry is a type of performance that uses simple colourful figures made from leather or paper to act out its stories and is believed to have originated in Shaanxi province during the Han Dynasty (206 BC–220 AD). In-keeping with this local flavour, both the opera and shadow puppet shows at the mansion utilise the local dialect of Shaanxi province and the stories they tell revolve around popular folk legends. These lively performances are complemented by classes on the traditional Chinese art of papercutting and peaceful tea ceremonies at the courtyard teahouse.

Make your dream trip to The Gao Family Mansion come true on our travel: Explore the Silk Road in China