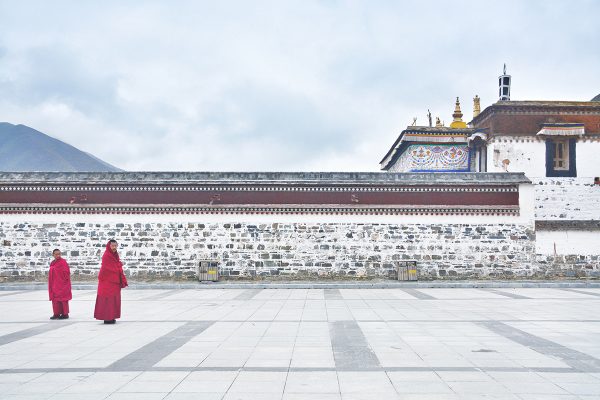 With its white-washed walls and golden roofs, the Labrang Monastery rises up along the banks of the Daxia River in Xiahe County like an imperial palace hidden amongst the trees. Its location places it at an intersection between four major ethnic groups, the Tibetans, Mongolians, Han Chinese, and the Hui people, meaning that over the years it has been influenced by numerous cultures. It boasts the largest population of resident monks outside of Tibet and is one of six major monasteries dedicated to the Gelugpa branch of Tibetan Buddhism, standing alongside other prestigious academies such as the Drepung Monastery in Tibet and the Kumbum Monastery in Qinghai.

It was founded in 1709 by a first generation Jamyang Zhépa named Ngawang Tsöndrü (1648–1721), a title which meant that he ranked third in importance after the Dalai Lama and the Panchen Lama[1]. The northern district of Xiahe City is almost completely dominated by the monastery complex, meaning it’s largely regarded as a monastic city. Let’s just hope the locals don’t develop a holier-than-thou attitude! Unlike many of the cities dotted throughout Gansu province, over 50% of Xiahe’s population is made up of Tibetan people and this is reflected in the culture, architecture, and lifestyle enjoyed by the locals.

In its heyday, Labrang was home to nearly 4,000 monks, but these numbers rapidly declined due to disruption during the Cultural Revolution. The population is now capped at 1,800 monks, who travel from across China for the coveted opportunity to study there. During their study, each monk chooses to join one of the six dratsang or colleges within the complex, which each offer different specialities ranging from theology to traditional Tibetan medicine. From then on, the monastery’s library is their best friend, as it contains over 60,000 sutras[2] dedicated to various topics. Imagine trying to get through all of those in your lifetime!

The complex is separated into 18 halls, one golden stupa[3], and a sutra debating area, which are all a stunning mixture of Han and Tibetan architectural styles. There is even a museum within the complex, which features exhibitions of statues, sutras, and murals along with an array of Tibetan language books, history books, medicines, and other artistic objects that can be purchased.

The Grand Sutra Hall is the main area used for religious activities and its interior is delicately decorated with shrines, murals of Buddha, and bookcases stacked with sutra scrolls. Located just to its northwest is the Grand Golden Tile Hall, which is a six-storey building with a roof made from bronze tiles that are plated with gold. The architecture has a certain Nepalese flair and, within the hall, there stands a bronze statue of Buddha crafted by Nepalese artisans. In front of the hall gate, there stands a stele[4] with Han, Tibetan, Manchu, and Mongolian characters inscribed upon it by the Jiaqing Emperor of the Qing Dynasty (1644-1912). As if being multilingual wasn’t impressive enough!

Another major highlight of the complex is the three-storey Barkhang, which is the monastery’s traditional printing press. Hidden down a small lane, this hall boasts rows and rows of over 20,000 wood blocks that are used for printing sutras and religious texts. Near to the Barkhang, the Hall of Hayagriva serves as a repository for vivid murals and contains a rare 12 metre (39 ft.) high statue of Hayagriva, the wrathful manifestation of the goddess Guanyin with six arms, three faces, and a characteristically fierce scowl. This is just one of the many thousands of statues scattered throughout the complex, some of which are made out of gold, silver, aluminium, bronze, wood, jade, and all manner of opulent materials.

Nowadays the monastery is still an important pilgrimage destination for Tibetans living across China. Vibrant and lively festivals take place here throughout the year, but none are more magnificent than the festivities that surround Losar or the Tibetan New Year. Each year during Losar, a huge Thangka or Buddhist painting is hung on the monastery’s Thangka Wall. Thousands of pilgrims travel to attend the celebration and then walk the kora path or pilgrimage circuit, which winds around the complex and is littered with colourful prayer wheels. So, if you’re taking a trip to Labrang, be prepared for lots of walking!

[1] The Panchen Lama: The highest ranking lama after the Dalai Lama according to Tibetan Buddhism.

[3] Stupa: A hemispherical structure with a small interior designed for storing Buddhist relics and for private meditation.

[4] Stele: An upright stone slab or pillar that bears an inscription and usually marks a burial site, like a tombstone.