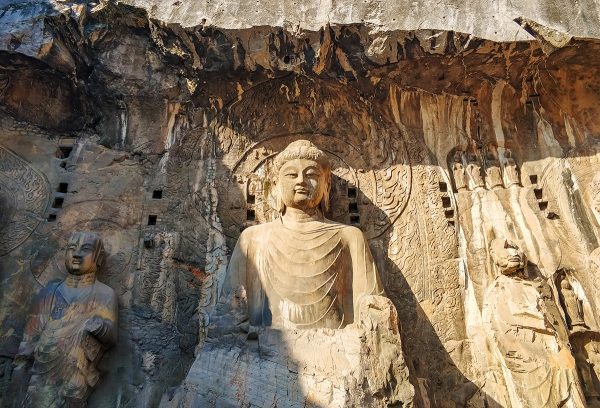 Carved deep within the limestone rock-face of Mount Xiang and Mount Longmen, the Longmen or “Dragon’s Gate” Grottoes are regarded as one of the finest examples of Buddhist art in China. This colossal complex stretches along both banks of the Yi River and boasts over 2,300 caves, which contain more than 110,000 Buddhist statues, 60 stupas(1), and 2,800 stele(2) inscriptions. In 2000, its historical significance and undeniable aesthetic value meant it was designated a UNESCO World Heritage Site. Its location, just 12 kilometres (8 mi) south of the city of Luoyang, is a telling clue as to how these magnificent grottoes came to be.

During the late 4th century, the Tuoba clan of the Xianbei people controlled much of northern China under the Northern Wei Dynasty (386–535). In 495, they made the bold decision to move their imperial capital from northern Pingcheng (modern-day Datong, Shanxi province) to Luoyang. After having masterminded the Yungang Grottoes near Datong, the Northern Wei aristocracy turned their attention toward the mountains near Luoyang. After all, there’s no sense in giving up the habit of a lifetime, particularly if that habit is financing lavish works of art! By the late 5th century, the first of the Longmen Grottoes had been carved.

While over 30% of the caves were constructed during the Northern Wei Dynasty, the complex wouldn’t reach its peak until the Tang Dynasty (618-907). It was during this time that the artistic style of the paintings and statuary within the caves radically changed, from the blocky and simplistic style typical of Indian Buddhist art to the refined and opulent designs that became characteristic of Chinese Buddhist art. In particular, this “Longmen style” is known for portraying the Buddha in the traditional flowing garments of a Chinese scholar.

Over time, this sophisticated form of Buddhist art spread throughout China, and had a wide-reaching influence across other Asian countries. Caves continued to be carved at Longmen right up until the Song Dynasty (960-1279), but its development was eventually halted due to internal warfare between the Jurcen-led Jin Dynasty (1115-1234) and the Yuan Dynasty (1271-1368). Tragedy struck yet again during the Second Sino-Japanese War (1937-1945), when the Japanese army looted the site and took many of the statues back to Japan. These relics are now mainly housed in Japanese museums.

Nowadays, the Longmen Grottoes are one of the most popular tourist attractions in China and provide a window into the history of Buddhism as it gradually rose to become one of the most prominent religions in the nation. While all of the caves have their own unique charm, there are a few that are usually singled out for special praise. After all, not all art is created equal! These exceptional areas of the complex are known as Guyang Cave, the Three Binyang Caves, Wanfo Cave, Yaofang Cave, and Fengxian Temple.

Guyang Cave was originally constructed under the orders of Emperor Xiaowen and is the oldest, as well as the largest, of its kind in the complex. Evidence suggests it was begun in the year 478, meaning that Emperor Xiaowen may have decided to start building the Longmen Grottoes long before he moved his capital to Luoyang. Talk about thinking ahead! Over time, the cave was filled with sculptures and inscriptions, all of which are conveniently accompanied by a record of the artist’s name, the date of construction, and the reason they were carved. Even in ancient times, it was important to make sure no one took credit for your hard work!

Not content to be outdone, Emperor Xiaowen’s son, Emperor Xuanwu, decided to construct three caves of his own, two dedicated to his father and one dedicated to his mother. These are known collectively as the Three Binyang Caves or separately as North, Middle, and South Binyang Caves. Of these, Middle Binyang Cave is the most well-known and widely celebrated for its artwork. At its centre, there is a statue of Shakyamuni(3) Buddha flanked by bodhisattvas(4), while the two side walls also each have a statue of Buddha with accompanying bodhisattvas. These are designed to represent the Buddhas of the past, present, and future.

While three Buddhas may sound like the magic number, Wanfo or “Ten Thousand Buddha” Cave contains over 15,000 statues of Buddha, the smallest of which is only 2 centimetres (0.79 in) in height! If the sight of so many Buddhas proves too much for you, the nearby Yaofang or “Medical Prescription” Cave is sure to cure what ails you. This cave is covered in over 140 inscriptions, which contain information on how to treat medical conditions ranging from the common cold right through to insanity!

Yet none of these caves compare to the spectacular Fengxian Temple. This colossal cave shrine was sponsored by Empress Wu Zetian, the first woman in Chinese history to have ruled as emperor. It contains a seated figure of Vairocana(5) Buddha that is over 17 metres (56 ft.) tall. To put that into perspective, it’s over 5 times the size of an African elephant! It is accompanied by eight other huge statues, including Vairocana’s disciples Kasyapa and Ananda. The sculptures within this cave shrine are considered emblematic of the Tang Dynasty style. Surrounded by murals, sculptures, and artwork beyond compare, it’s hard not to feel inspired after a trip to the Longmen Grottoes!

1. Stupa: A hemispherical structure with a small interior designed for storing Buddhist relics and for private meditation.

2. Stele: An upright stone slab or pillar that bears an inscription and usually marks a burial site, like a tombstone.

3. Shakyamuni: One of the titles of Gautama Buddha, the central figure and founder of the Buddhist faith. It is derived from the place named Sakya, which is where he was born.

4. Bodhisattva: The term literally means “one whose goal is awakening”. It refers to a person who seeks enlightenment and is thus on the path to becoming a Buddha. It can be applied to anyone, from a newly inducted Buddhist to a veteran or “celestial” bodhisattva who has achieved supernatural powers through their training.

2 Replies to “The Longmen Grottoes”