Like many facets of their culture, the traditional dress of the Hui people has been heavily influenced by their Islamic faith. The key to their outfits is to look clean, bright, and sombre, although some embellishment is allowed. The men wear small black or white caps without brims, and these hats can be pentagonal, hexagonal, or octagonal depending on the branch of Islam that they follow. They have a preference for double-breasted white shirts and, in some cases, white trousers and socks. Both men and women like to wear blue waistcoats and some men will wear an extra waistcoat to create a tidy, crisp contrast. In colder areas or during harsh winters, some men and women will wear fur garments made from sheepskin. 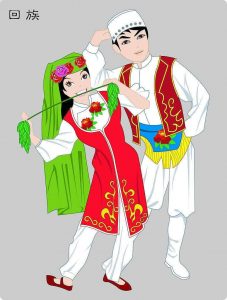 The women’s dress, though not as elaborate as many other ethnic minorities, is rather more decorative than the men’s. They tend to wear headscarves or veils but these vary depending on their age. Young women typically wear green or coloured veils that have a golden trim and have been embroidered with elegant floral patterns. Married women will wear black veils that cover them from head to shoulder, while elderly women will wear white veils that stretch from their head all the way down their backs. They normally wear a dress that fastens at the side over a pair of trousers and, although they are usually muted in colour, younger women’s clothes may be embroidered with decorative patterns. Women of all ages liven up their outfits with gold or silver bracelets, earrings and rings because, after all, diamonds aren’t a girl’s only best friend!