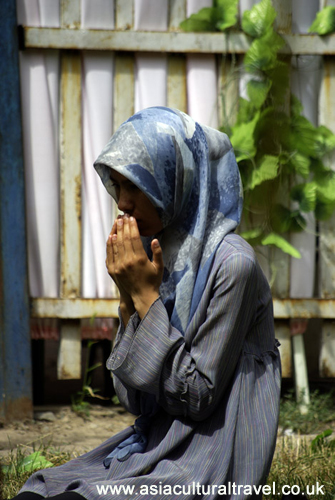 Throughout their long and illustrious history, the Uyghur people have adopted numerous religions, including shamanism[1], Tengrism[2], Manichaeism, and Buddhism. However, by the 17th century, the vast majority of Uyghurs had converted to Islam. This means that they pray in mosques, follow priests known as imams, and worship the holy book known as the Quran. They rank as the second largest Muslim group in China, directly after the Hui people. That being said, Uyghurs and Hui people rarely worship in the same mosques.

Nowadays, the majority of Uyghur people follow the Sunni branch of Islam, although there are existing conflicts between those who subscribe to the mystical tradition of Sufism and those who do not. Generally speaking, Uyghurs living in the southern regions of Xinjiang, particularly surrounding the city of Kashgar, are much more conservative. In these regions, women will most likely wear the full veil, which is uncommon in other parts of Xinjiang. In less conservative areas, many people will still drink alcohol, will not object to women working, and will allow young women to wear Western clothes.

In rural parts of Xinjiang, many shamanistic and animistic[3] traditions endure. These traditions appear to have intertwined with Islam, as shamans will chant passages of the Quran to heal the sick and people will wear amulets inscribed with Arabic script to ward off evil spirits. In Gansu province, there is a small pocket of people known as the Yugurs or “Yellow Uyghurs” who still practice Tibetan Buddhism. It is thought that they share a common ancestry with the Uyghur people, although they are a distinctly different ethnic group.

[2] Tengrism: This is a Central Asian polytheistic religion that incorporates features of shamanism, animism, totemism, and ancestor worship. The religion is founded on the belief that the meaning of life is to live in harmony with the natural world. Historically, it was of great significance to the Turks, the Mongols, and the Hungarians.

[3] Animism: The belief that all non-human entities, including animals, plants, and even inanimate objects, possess a spiritual essence or soul.