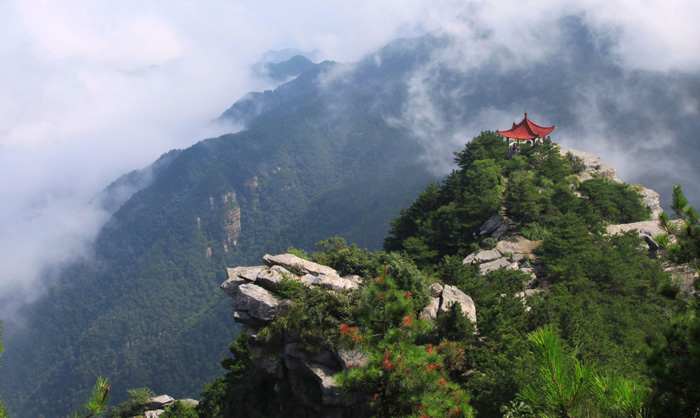 Rising up mistily in the countryside of Jiangxi province, Mount Lu was once one of the major cultural and spiritual centres of ancient China. In fact, its undeniable historical significance meant that it was honoured as a World Heritage Site by UNESCO in 1996. Located approximately 20 kilometres (12 mi) south of Jiujiang City in the northern part of Jiangxi province, it forms the eastern extremity of the Mufu Mountains and culminates in the 1,474 metre (4,836 ft.) tall Dahanyang Peak. To the north, it offers spectacular views of the Yangtze River, while to the south it overlooks the shimmering Lake Poyang. 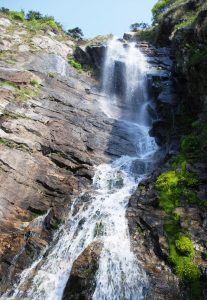 In ancient times, this mountain range was known as Mount Kuanglu and was regarded as a holy place. As early as the Han Dynasty (206 BC–220 AD), a prominent Taoist priest named Zhang Daoling travelled to the mountain in order to worship there. During the Jin Dynasty (265-420), the Donglin or “Eastern Wood” Temple was established on the mountain’s northern slope by a celebrated monk named Huiyuan, who founded the Pure Land Sect of Buddhism. From then on, numerous temples dedicated to Buddhism and Taoism began cropping up across the mountain, until there were over 300 of them. Talk about prime spiritual real estate!

Arguably the mountain’s greatest claim to fame is the White Deer Grotto Academy at the base of Five Old Men Peak, named for its supposed resemblance to five old men sat side-by-side. The academy was originally established during the Tang Dynasty (618-907) by the poet Li Bo and was so-called because he kept a white deer as a pet. However, it didn’t become truly famous until the Song Dynasty (960-1279), when it was revived by a celebrated philosopher named Zhu Xi.

Zhu was the founder of Neo-Confucianism, which is widely regarded as one of the most influential schools of thought in Chinese history. Thanks to his efforts, the academy rose to prominence as one of the Four Great Academies of China and, by the 19th century, it had expanded into a colossal complex, complete with its own temples, study halls, and libraries. Over time, countless writers, artists, and calligraphers have sung the mountain’s praises, immortalising it in over 900 cliff inscriptions and more than 300 steles[1] that can be found throughout the range.

Before the Second World War, Mount Lu became the official Summer Capital of the Republic of China (1912-1949) and was a popular retreat for expats throughout the country. Chiang Kai-shek, leader of the Kuomintang[2], would often spend his summers there and it became the setting for a number of major political events, including in 1937 when Chiang announced his intention to fully mobilise for war against the Japanese and in 1946 when he met with the US General George C. Marshall. The mountain continued to play a major political role in Communist China, when Mao Zedong led three large meetings in 1959, 1961, and 1970 known as the Lushan (Mount Lu) Conferences. 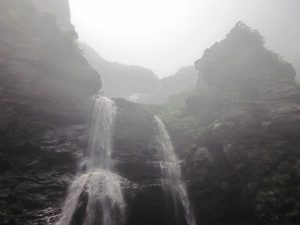 Nowadays, with its beautiful scenery and elegant temples, the mountain range is a popular tourist attraction. Geographically speaking, it’s known as a horst-style block mountain, meaning it’s a narrow section of land that lies between two fault lines and has been pushed up as a result of tectonic pressure from either side. Scattered throughout its expanse, you’ll find rippling streams, deep ravines, rocky outcroppings, mysterious caves, and rushing waterfalls.

Of the mountain’s 12 main scenic areas and 37 attractions, the Three Step Waterfall is undoubtedly one of the most magnificent. On its way down, the waterfall spills over three natural, glaciation-formed terraces and drops approximately 155 metres (509 ft.). It’s considered so integral to the mountain range that an old local saying states a visit to Mount Lu would be wasted if you missed seeing the Three Step Waterfall. After all, three is the magic number!

Hanpo Pavilion, which is located at the top of Hanpo Pass, is the ideal place to enjoy a panoramic view of the entire area surrounding the mountain. Marvel at aerial views of Lake Poyang glistening in the sunlight or absorb the breath-taking vistas of the peaks as the sun slowly rises behind them. If you fancy staying on the mountain to ensure you capture the beauty of the sunrise, there’s a village located at the heart of the mountain range known as Guling. The village’s name, which translates to mean “bull”, is derived from the fact that its layout supposedly resembles the shape of a bull. After a long hike up the mountain, nothing is sure to relax you more than a cup of locally grown Yunwu tea in one of the village teahouses!