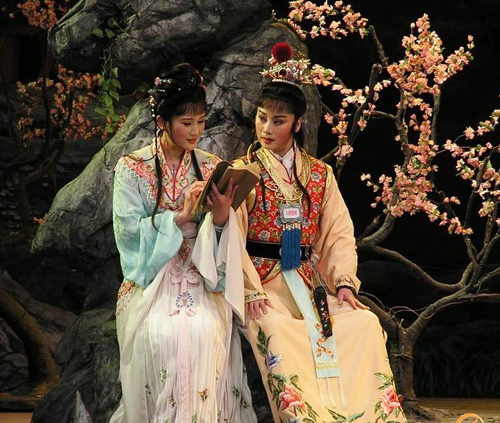 Yue Opera is the second most popular style of Chinese opera after the world-renowned Peking Opera, which is no small achievement when you consider that there are over 360 opera genres in China. After all, there’s nothing wrong with getting a silver medal! It originated from Sheng County (modern-day Shengzhou City) in the Shaoxing region of Zhejiang province and is thus sometimes referred to simply as Shaoxing Opera. The name “Yue” is derived from the ancient State of Yue, which ruled the region during the Spring and Autumn Period (c. 771-476 BC). It enjoys great prestige in Zhejiang, Shanghai, Jiangsu, and Fujian, although the style attracts audiences from all over China.

Like many styles of Chinese opera, it evolved from the conversations that farmers would have and the folk songs they would sing when working. They became particularly popular with rural communities because they contained vivid and romantic descriptions of normal daily life. Kind of like watching your favourite soap opera! During economic downturns, many farmers would turn to this folk art as a secondary job in order to supplement their income. Over time, performers began to integrate simple acting sequences and musical accompaniments to further enhance the art.

Towards the end of the Qing Dynasty (1644-1912), the opera form began to take shape and groups of performers were known as “Didu Troupes”, a name derived from the characteristic “didu, didu” sound made by the accompanying drum and sandalwood clappers. Imagine having someone name your band “Guitar Riff” or “Drum Beat”, and you can see why the performers may have been dissatisfied with the title! In 1906, the first official performance of this operatic style was staged in the city of Shengzhou and by 1917 Didu Troupes had started performing in Shanghai. Finally, in 1922, they formally changed the style’s name to “Shaoxing Wenxi” or “Shaoxing Literal Opera”. It may not exactly roll off the tongue, but at least it was better than being named after a sound effect! 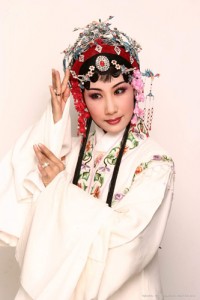 Originally this style was performed solely by male actors, but in the late 1920s an all-female troupe named the Women’s Refined Opera emerged. In a true demonstration of girl power, this troupe became so popular that all-male troupes were completely replaced by all-female troupes during the 1930s and 1940s. It was around this time that the name “Yue Opera” was formally adopted. Yet precisely why this opera style switched to exclusively female troupes is still a subject of great debate among opera enthusiasts.

On the one hand, the economic downturn caused by the Wall Street Crash in 1929 had far-reaching effects in China, which caused many women to seek out alternative ways to make money and thus train as opera singers. On the other hand, many people argue that this style of opera lends itself to a more feminine performance and this is why all-female troupes were simply more popular. Regardless of motive, the presence of these female performers and their dominance over the art was an undoubted boost to the women’s rights movement at the time.

During the 1950s, the style went through a huge artistic reform driven by woman named Yuan Xuefen. It adopted several features from other performance arts, including the ancient Kunqu Opera[1] and modern Western music. In this way, Yue Opera was able to drastically distinguish itself from other styles of Chinese opera. Not long thereafter, the traditional Mu Biao system, where performers would only have an outline of the story but were free to improvise, was abandoned in favour of conventional scripts and directors. Modern stage settings and lighting were introduced, as well as some western musical instruments, which further helped to establish Yue Opera as a more progressive style of Chinese opera.

After the establishment of the People’s Republic of China in 1949, the style became popular with several members of the Communist Party and reached the peak of its fame during the late 1950s and early 1960s. However, like many traditional Chinese art forms, it was outlawed during the Cultural Revolution (1966-1976) and this proved to be an almost fatal setback. It enjoyed a revival during the 1980s and, although it has never recaptured the success of its glory days, it continues to captivate foreign and domestic audiences to this day.

It is characterised by its fresh, graceful, and lively style of singing, which is sweet-sounding and lends itself to the telling of love stories. Unlike other forms of opera, which incorporate acrobatics, martial arts or dancing, the focus in Yue Opera is almost solely on the singing. Subject matter is usually derived from fairy tales, literary classics, or historical stories, such as Liang Shanbo and Zhu Yingtai (The Butterfly Lovers), Dream of the Red Chamber, Peacocks Flying to the Southeast, and Fang Qing Visits His Aunt. Bear in mind that making a humdrum visit to see a family member seem exciting is no mean feat!

When it comes to costume, silks and satins take centre stage as clothing materials are chosen for their soft texture and appearance. The use of plain, block colours gives these costumes an unparalleled elegance, although a type of embroidered robe known as a mangpao is also sometimes used. To complement this subtle style, natural make-up is often employed to give the actors a softer appearance. So, if you’re searching for that au naturale look, perhaps a trip to the theatre is in order!

[1] Kunqu Opera: Also known as Kun Opera or simply just Kunqu. It is the oldest surviving form of Chinese opera and dominated Chinese theatre from the 16th right through to the 18th century. Many popular styles of Chinese opera, such as Peking Opera and Yue Opera, were greatly influenced by this style.