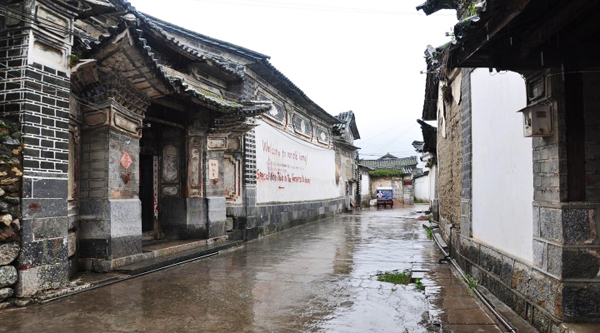 Xizhou literally means the “happy prefecture” and, if you take one look at its idyllic surroundings, you’ll see why. The town lies on the richly fertile strip of land between Erhai Lake and the Cangshan Mountains, and is only 18 kilometres north of Dali Ancient Town, making it a rural paradise that should not be missed. The town has achieved great renown throughout Yunnan for its beautifully preserved buildings, which are a seamless mixture of Bai ethnic minority and Qing Dynasty style architecture. Over 200 of the households are registered as national cultural relics, which practically makes the town a living museum. And, if that doesn’t tempt you, the locals even have their own kind of pizza!

The town was originally formed by the Yan, Dong, Yang and Zhao clans from the Bai ethnic minority. Many of the mansions scattered throughout Xizhou were founded by these families and the Yan Family Compound has now been converted into a delightful museum. The houses were built based on the Bai concept of “three rooms and one wall screening, four joints and five courtyards”.

The first half refers to the structure of the main house, which will usually have one main room, two side rooms and a “shining wall” that reflects light back into the house at sunset. The second half refers to the four courtyards in the corners of the compound that join the four walls together and the fifth courtyard that sits at the centre. The homes themselves are decorated with hexagonal honeycomb patterns, elaborately carved gateways, colourful paintings, and marble ornaments. They are considered some of the most well-preserved examples of Qing Dynasty (1644-1912) architecture and their Bai ethnic flair is what makes them unique.

But how were these ancient farmers able to build such fine mansions? By becoming rich of course! During the Ming Dynasty (1368-1644), the four clans of Xizhou amassed great wealth through trade. Thanks to the Tea-Horse Road, Bai merchants were able to trade locally sourced tea and marble throughout Asia. The rich merchant families then encouraged their children to pursue a life of academics and many went on to successfully take the imperial examinations. Thus Xizhou rapidly became a community of prosperous merchants, officials and scholars.

When the Qing Dynasty collapsed in 1911, the Bai businessmen didn’t panic; they just kept on trading! Some of these families were so wealthy that they were able to send their children overseas to study. During the second Sino-Japanese War (1937-1945), the National Army used Xizhou as a stronghold. They successfully protected the town from Japanese soldiers and thus it suffered little damage throughout the war. When many Chinese intellectuals fled to this safe haven, the Huazhong University was established and Xizhou soon came to be known as the “Cambridge of the East”. Thus much of the town’s architecture was saved from destruction and many of its locals went on to become professors in universities around the world. When you consider just how small and isolated Xizhou is, its economic and academic development is truly outstanding.

Nowadays most activity in the town circulates around Sifang Jie, the old town square. There you can find many vendors selling charming souvenirs, such as Bai batik[1] cloth, embroidered clothing, marble ornaments and various antiques. You can also sample many local snacks there, including Yunnan-style barbecue and Xizhou baba (喜州粑粑). Xizhou baba is a lardy flatbread that is either topped with minced pork and spring onions or filled with sweet red bean paste. Its circular shape and use of meaty toppings has earned it the nickname “Xizhou pizza”. Just don’t go asking any of the vendors for stuffed crust or pepperoni!

Part of the town rests on the shores of Erhai Lake, making it the ideal place to go for a swim or simply take in the pleasant scenery. If you fancy a longer stay, the old Yang family compound has been converted into a hotel and is now named the Linden Centre, after its American owners. The hotel also acts as a cultural retreat, running numerous tours throughout the year.

This ancient mansion is considered one of the most characteristic examples of Bai architecture in the town. It once belonged to the Yan family but was donated to the local government and converted into a museum. The “shining wall” of the principal house is adorned with stunning calligraphy, while inside the museum you’ll find many of the precious items signifying the wealth of the Yan clan.

Here you can also to take part in the traditional Three Teas Ceremony. During the ceremony, you drink three cups of tea; the first is bitter, the second is sweet, and the third is a cleansing tea that is bitter, sweet and spicy. The first cup symbolises suffering, the second represents the happiness of overcoming hardship, and the third signifies reflection on the past. Just don’t get too wrapped up in your own spiritual musings, or your tea will go cold!