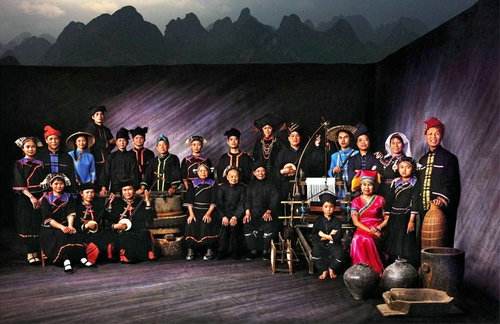 With an estimated population of approximately 18 million people, the Zhuang are the most populous of all the ethnic minorities in China. Nearly 90% of Zhuang people can be found in Guangxi Zhuang Autonomous Region, with smaller constituencies in the provinces of Yunnan, Guangdong, Guizhou, and Hunan. Compared to Mandarin Chinese, which only has 4 tones, their indigenous language has a staggering 8 tones and is closely related to the languages of the Dong, Bouyei and Dai ethnic minorities, as well as the standard Thai of Thailand and the standard Lao of Laos. As if that wasn’t confusing enough, they also boast two different writing systems!

Though nowadays many Zhuang people use the Romanised script that was created in 1957, some locals still use an ancient writing system known as Sawndip or Old Zhuang Script. This system uses Chinese characters but only for their sound value and in some cases new characters have been created by adding or removing strokes from existing Chinese characters. Sawndip was mainly used by shamans to write anything from folktales and myths to songs and medical prescriptions, and has become an invaluable academic resource for people researching Zhuang history. Their most famous literary work, Baeu Rodo, is an epic poem about the creation of the world. It is over 10,000 lines long and phenomenally has been transmitted orally for over 1,000 years!

Now I don’t know how far you can trace your family back, but I’m willing to bet that the Zhuang have you beat! According to contemporary archaeological evidence, the Zhuang’s origins can be traced all the way back to the Palaeolithic Age, which occurred over 2.6 million years ago. They were initially conquered by the Han people in 214 BC, during the Qin Dynasty (221-206 BC), and suffered from a tenuous relationship with the imperial government up until the abolishment of imperial rule in 1912.

Frequent peasant revolts broke out in Guangxi primarily because the Zhuang were mistreated by the government and subjugated into a landownership system that favoured the Han authorities but deprived the local Zhuang farmers. This system was abolished when the Qing Dynasty (1644-1912) ended and the Zhuang have led a peaceful and largely uninterrupted existence ever since.

They are thought to be related to the ancient Luoyue people and the earliest indication of this connection can be found among the Rock Paintings of Mount Hua. While the Han people spent their time plotting their domination of China, evidently the Zhuang were far too busy painting! These paintings date back to the Warring States Period (c. 476-221 BC) and cover a colossal length of over 200 kilometres. They are made up of 287 groups of murals that are distributed throughout 183 different places.

The Mother Frog, an ancient deity who looks half-human and half-frog, is a common theme throughout these murals and is almost always painted red. Other motifs include running dogs, birds, bronze drums, the stars, and the sun. In Ningming County, there is one mural that is over 40 metres high and 170 metres wide, meaning it is 10 times as tall as an African elephant, over 3 times as long as an Olympic swimming pool, and the largest of its kind in the world!

Nowadays most Zhuang villagers live in stilted wooden houses known as diaojiaolou. These are two-storey dwellings that are suspended on stilts, with the ground floor being used for storage and the upper floors being used as living spaces. The key difference between the Zhuang diaojiaolou and those of other ethnic minorities is the incorporation of a central room where an ancestral shrine is kept. This shrine is used to worship the family’s ancestors, as well as deities such as the Kitchen God and the God of Wealth. If you want to get to known the Zhuang first-hand, we recommend visiting Ping’an Village or Longji Ancient Zhuang Village in Guangxi.