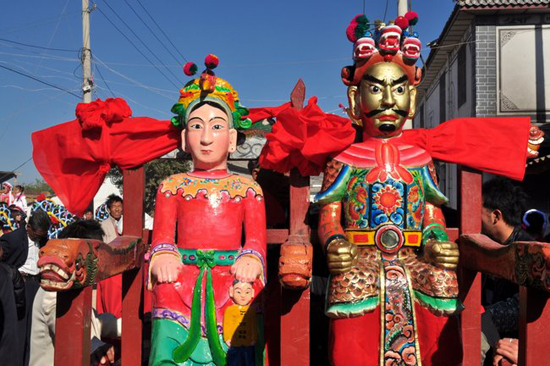 The Bai people believe in a mixture of Buddhism, Confucianism, and an indigenous religion known as Benzhuism. In fact, their religious beliefs are so diverse that it is not unusual to find a Buddhist, Taoist, Confucian, and Benzhu temple within a single Bai village. After all, when it comes to the afterlife, you’ve got to have your bases covered! They adopted Buddhism sometime during the 7th century and Guanyin, the Buddhist deity of mercy, features prominently in some of their oldest myths.

However, by far the most fascinating are the beliefs surrounding their native religion of Benzhuism. This religion revolves around the worship of what they call ngel zex and what the Chinese call benzhu (本主), which roughly translates to mean “local lord” or “local ancestor”. Though its popularity has waned throughout the years, it has recently made a comeback and, according to a census done in 1990, there were approximately 986 Benzhu shrines in Dali Bai Autonomous Prefecture alone!

The Bai are polytheistic and their beliefs incorporate aspects of animism[1] and traditional Chinese religion. In fact, they worship pretty much anything, including natural objects, such as stones and trees; ancient deities, such as the God of the Mountain and the God of the Sun; historical heroes from various ethnic groups; legendary characters from folklore; and kings, princes, generals or ministers of the Nanzhao (738-902) and Dali (937-1253) Kingdoms. However, all of these deities act as subsidiaries to the local lord or benzhu.

Generally speaking each village will have its own benzhu, which is the main subject of worship for the villagers, although several villages will sometimes share the same benzhu. Other gods, such as the Dragon King who controls rainfall, the Mother God who distributes children to parents, and the God of Fortune who allocates wealth, all continue to function but are subordinate to the benzhu. 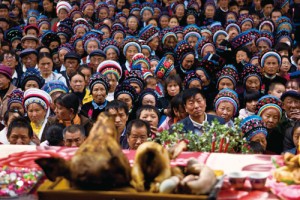 The villagers believe that the benzhu protects their village and passes on their wishes to the heavens, effectively acting as an intermediary between heaven and earth. These gods are always historical heroes, warriors, sages, leaders, or ancestors that have some sort of link to the village they protect and have been deified. For example, according to legend, the royal Duan family came from Qingdong village near Xizhou and thus their local benzhu is Duan Siping, the founder of the Dali Kingdom.

The mythology surrounding each benzhu is wonderfully rich, as every one of them will have a magnificent story to justify their position as a god. They have considerable power and are able to protect crops and livestock, dispel illness, and bring prosperity to the villagers. Whenever a member of the community is born, is sick, dies, or gets married, the villagers will perform certain ceremonies at the Benzhu Temple.

Some scholars believe that Benzhuism was the Bai people’s way of reinforcing their entitlement to certain territories. By worshipping a historical figure who first settled the area or who saved it during some kind of catastrophe, they emphasised their right as the historical figure’s descendants to inhabit that area.

The Nama branch of Bai people, who live near the Lancang River, have preserved the cult of the white stones, which they are believed to have inherited from the ancient Qiang people. However, the origins of these beliefs aren’t entirely clear. Some believe these stones are the sacred bones of their ancestors, while others think they are demons’ bones that are too dangerous to be moved, and still others feel they are symbolic of the Fire God, a deity worshipped throughout China. 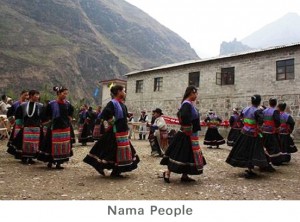 They also believe in the cult of the celestial ox, which is a godlike animal that has the power to protect the village, prevent disasters, and benefit the growth of crops and livestock. They believe that this ox, like the benzhu, can act as an intermediary between gods and men. The Nama perform a ritual sacrifice during the 6th lunar month of each year whereby they transform a regular ox into a celestial one, “help” the ox reach the heavens by sacrificing it and beseech it to present their entreaties to the gods. That being said, I can’t imagine the ox is too keen to help them after they’ve just killed it!

Sometime during the 18th century, Benzhuism was introduced to the Nama and intermingled with their religious beliefs, which is evidenced by the images of the celestial ox that can still be found in their Benzhu Temples. The term “nama” means “tiger” in their language, as the Nama people believe that they are descended from tigers and so worship the Mother Tigress as their ancestral benzhu.

[1] Animism: The belief that all non-human entities, including animals, plants, and even inanimate objects, possess a spiritual essence or soul.