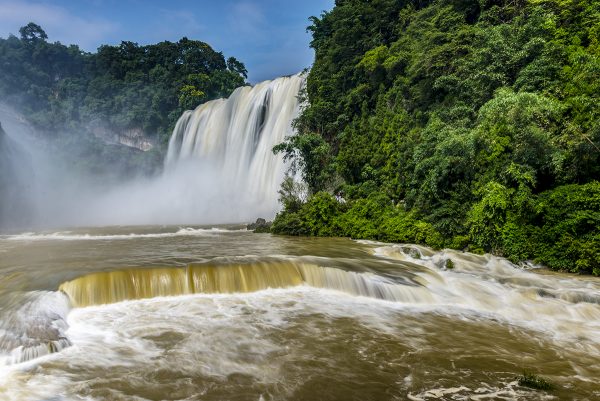 Legend has it that, when a Chinese general named Wu Sangui (1612-1678) was defeated in battle, he threw all of his gold and silver into the Rhinoceros Pool at the bottom of Huangguoshu Waterfall. He then defected to the Qing Dynasty, turning on the Ming imperials who he had once served. His attempt to betray the Qing Dynasty proved to be his downfall, as he was defeated and executed by them. Years after his death, it was said that an old couple settled beside the Huangguoshu Waterfall. They planted over 100 fruit trees there but they were all barren. Only one fruit tree stood out among the rest and bore on its branches one large, yellow fruit.

One day, a Taoist priest happened to be passing by and he saw the yellow fruit. He was so overwhelmed by joy at the sight of this fruit that he offered the old couple 1,000 liang (about 5,000 kg) of silver for it, but only on the proviso that they did not pick the fruit for 100 days. The old couple were delighted by the offer and promised to watch the tree until the priest returned on the 100th day. After 99 days, the old couple began to grow anxious. They worried that birds may try to eat the fruit or insects may bury into it. They made the decision to pick the fruit, as it was only a few hours until dawn. When the Taoist priest returned to collect the fruit and found that it had been picked early, he was overcome with disappointment.

The old couple did not understand why he was so upset, so he took them to the Rhinoceros Pool and tossed the huge, yellow fruit into the water. The fruit began swirling round and round in the pool and, as it turned, it became larger and larger, sucking in all of the water. The more water it absorbed, the brighter the pool became, until finally all of the water was gone and Wu Sangui’s treasure was uncovered. The old couple were delighted by the treasure but, before they had a good chance to look at it, the yellow fruit burst and the water filled up the Rhinoceros Pool, covering the treasure once again. The Taoist priest told the elderly couple that, according to prophecy, if this magical yellow fruit had been left for 100 days, it would have absorbed all of the water and allowed them to retrieve the lost treasure. The waterfall was then named Huangguoshu or “Yellow Fruit Tree” Waterfall, in honour of this legend. Some believe that the rainbow above the Rhinoceros Pool is actually just the light shining off of Wu Sangui’s hidden treasure. 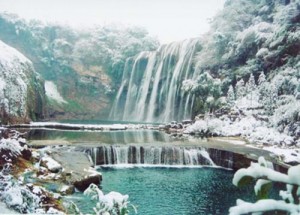 All of these vantage points undoubtedly provide any tourist visiting Huangguoshu Waterfall with stunning views of the waterfall and plenty of gorgeous photographs to remember their trip by. However, the most popular viewing platform, the Water-Curtain Cave (Shuiliandong), is by far the most exceptional. The Water-Curtain Cave is a naturally formed cave that is 134 metres (440 ft.) long and sits directly behind the waterfall. It is actually made up of about 6 separate caves and this system of caves allows visitors to walk behind the waterfall. At the fourth cave, known as Mopu Flat (Moputai), you can even reach out and touch the water as it is falling.

The best time to visit Huangguoshu Waterfall is between May and October, during the rainy season, as the flow of water will be at its strongest. The peak tourist season is between July and August. Watching a rainbow curve its way over the stunning Huangguoshu Waterfall as it thunders into the Rhinoceros Pool is certainly a wonder to behold. Perhaps, on your visit, you may even find a big, yellow fruit!

One Reply to “Huangguoshu Waterfall”